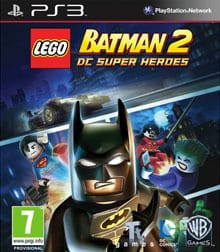 The constructible caped crusader is back and this time he has a lot of friends to help him out. If only he knew how to ask.

There was a time when I was utterly sick of Lego games. As anyone who has ever played one will know, there comes a point when you have collected just too many studs, made too many things and smashed enough Lego items to last you several life times.

However, having had a break from the plastic pushing for a while I came back to the genre, well there are so many Lego games now it’s pretty much a genre its own right, and what fun it has been. My enthusiasm has in part been rekindled by the fact that I have younger assistant who loves the Lego games.

Up until Lego Batman 2 I had been revisiting the original Lego Star Wars series, which was good, but is now put to shame. Whereas co-op play was possible, it was tricky as both characters had to stay on the screen at the same time. This meant that you really did have to work together, which is very frustrating.

In the newer Lego games, of course, you have dynamic split screen functionality and, once again, it works really well in Batman 2.

What has also developed in the recent games too is the level of detail and this has continued with Batman 2. The levels look amazing and the detail everywhere is just stunning. This includes fire and water, which look great. 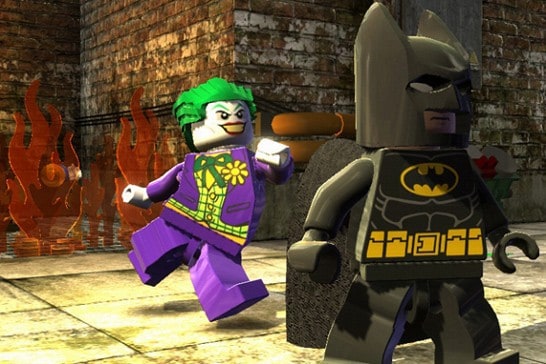 One of the best things in LB2 are the various suits that Batman and Robin use. You get these by jumping on to dais type things that have either the Batman symbol or an R for Robin. Early on in the game it is obvious when you have to use these, later on things get a little more complicated as you have to juggle how you use the suits in different scenarios.

This being DC Superheroes of course you aren’t just limited to Batman and Robin. A little way into the game and you get to play as Superman. In some ways this makes the game a little too easy.

Those blue and purple studs are no longer out of reach, for one thing, plus, as you’re the Man of Steel, you can’t be harmed in any way. This does mean that you stand much more chance of keeping all those hard earned studs. And speaking of them, in LB2 you will get loads.

The levels, you see, can be long too. One of them, where you work your way around Ace Chemicals, is very long. In the process in order to get 100 per cent studs, Superhero, you will get over 30,000 studs! Having said that studs are everywhere and they don’t seem to be as hard to acquire as in previous games. 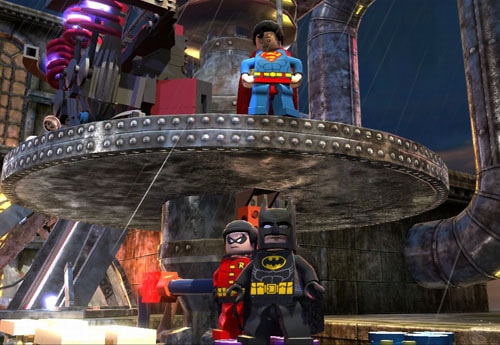 Despite all the good points there are some niggles. We found the save functionality clunky, especially if you want to stop mid-level. This is possible, thankfully, as in some places you can save and continue or save and exit. However, going back into these saves is fiddly and they don’t always work. For example one of the levels is on board a moving truck that is circling part of Gotham City.

Even though we had started the level (you have to catch up with the truck first) and saved it inside the truck, in order to continue you have to find the truck and catch up to it again. And on another occasion when we loaded the save game it started us earlier in the level than we had left it meaning we had to do some of it again.

Save issues don’t just happen in the story mode. If you like to 100 per cent your games and go back over the levels to get all the red and gold bricks and other hidden items, you need to finish the levels otherwise you don’t always keep everything that you’ve found.

The save issues are only a minor point and they don’t take much away from what is a brilliant game. The fact that you not only get to play as Superman, but also lots of other superheo characters in Lego is great in its own right. This is a must for Lego fans.