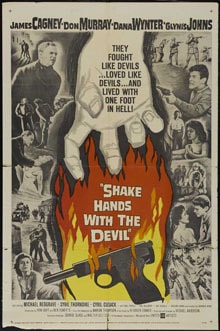 Shake Hands With The Devil is set in Dublin in 1921 and centres on the IRA’s fight against the rather oppressive occupation of the so-called ‘Black and Tans’, who are the British soldiers policing the country at the time. However, their methods of bringing law and order to the land are somewhat heavy handed (they frequently have a shoot first, ask questions later policy) and many of the locals have had enough and are secretly joining the Irish Liberation Army.

Kerry O’Shea (Don Murray) is a young Irish-American medical student who becomes sucked into helping out the IRA when one of his fellow students, Paddy Nolan, is shot by the Black & Tans whilst trying to give medical aid to a fallen IRA member. Saving his wounded friend from being captured by the troops Kerry manages to get them to a safe house and their lecturer, Dr Leonard (played by James Cagney) – who is also an eminent surgeon – is summoned. Sadly he fails to save Paddy’s life, but manages to eventually recruit the reluctant O’Shea into the guerrilla army’s ranks.

It soon becomes apparent to Kerry O’Shea that the liberation army is divided between those who want to negotiate independence with the British and those who just want to fight their way to the same goal – nothing really changes! The IRA’s general, played with a bit too much stiff upper-lipped Englishness by Michael Redgrave, wants to gain Irish independence through peaceful means, if possible, whereas Dr Leonard, who moonlights as an IRA Commandant, wants to spill British blood, and lots of it.

Things finally come to a head when the IRA kidnaps the daughter of one of the government’s senior advisors and Kerry falls in love with the prisoner, even though they have very different views. Dr Leonard means to execute her once she stops becoming useful, something which our American hero can’t accept, so the scene is set for a fight to the death between Kerry and the not-so-good doctor on a wind-swept cliff top.

Shake Hands With The Devil is an interesting film and one that probably wouldn’t have got a DVD release 20 years ago due to its pro IRA stance. Here the IRA members are clearly the heroes and the British government and their overly aggressive army are the bad guys. Having said that, things do balance out somewhat during the final act when the love interest arrives and it becomes clear that not all the English are complete bastards, especially if they’re very pretty! 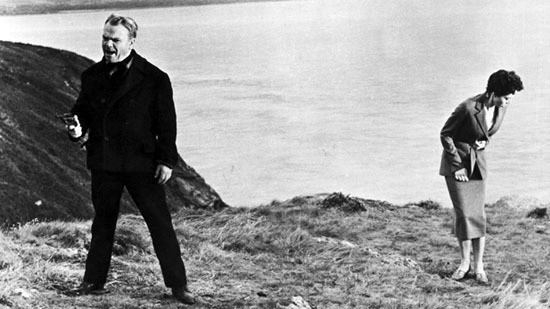 For me the main reason to watch this film is for Cagney’s performance, which is, frankly, riveting. Here he plays a man who on one hand heals the sick and saves lives and then, at the end of his working day, he picks up a revolver and starts killing people with no sign of the deep compassion we know he can show. The dichotomy of his character alone makes watching this movie worthwhile.

The film is nicely shot in black and white and, considering its age, it still looks and sounds great. I don’t know how much restoration was done to the print, but I’m guessing some was done and it clearly shows.

If I have any real criticism of the film it’s that some aspects haven’t aged particularly well. For example, some of the dialogue sounds a bit too home counties or too full of Irish clichés to stand up to too much scrutiny nowadays and some of the action is a bit too stagey with one punch up looking like something you might see during an am-dram version of Shakespeare. But films were made differently back then and were often more set bound and artificial looking anyway. This was actually shot at Bray Studios, which later become home to Hammer Films for a couple of decades.

It was also good to see classic English actors in early roles, including John Le Mesurier and Harry H. Corbett, playing a British general and an unsavoury type respectively. And special mention must also be made of Glynis Johns who plays Irish bargirl, Kitty, who ends up experiencing the brutish side of Dr Leonard’s misogynistic tendencies and then comes to a nasty end at the hands of British troops. Hers is a stand out performance too.

Shake Hands With The Devil has recently been released on DVD and is being distributed by Metrodome Distribution. Sadly there were no extras on the review disc.