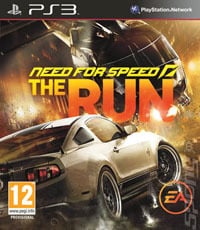 It doesn’t sound the most promising Need for Speed title does it? Don’t get us wrong, we like a bit of something original but wouldn’t The Drive be more apt? Perhaps he got locked out of the car.

By he, we mean Jack Rourke, who is our maverick protagonist in this latest addition to the increasingly erratic and amorphous Need for Speed franchise.

Jack’s a naughty chap and Need for Speed: The Run begins with a cut scene in which he’s been ambushed by some non-friends as his car gets chucked into an industrial crusher, with him in it of course.

Before the car quite literally becomes his most intimate of companion cubes, a Quick Time Event sequence begins in which you hammer a sequence of buttons in order to play out the FMV of Jack escaping, and hopping into a brand new high performance car, which just happened to be parked nearby, unlocked, with the keys in the ignition. 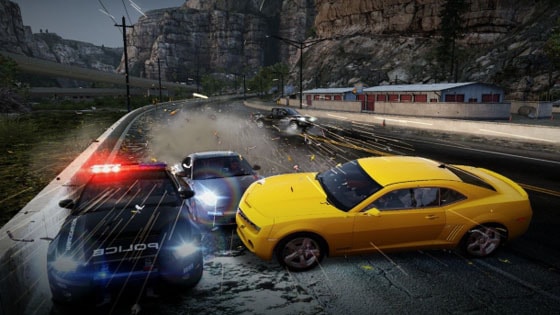 What follows is a Need for Speed Hot Pursuit style, um, pursuit, where the bad guys try to halt your escape. They don’t manage to do so, naturally, and Jack emerges into the big bad world, looking for one last shot at redemption.

Luckily this takes the form of a race, called The Run, that Jack’s taking part in, starting in San Francisco and ending in New York. The prize money being more than enough to pay off the bad guys who are after him (it turns out they are the mafia) and leaving enough change for a bag of chips and a bus ride home.

After the incongruous, QTE seasoned opening sequence, it’s comforting to find out that actual driving takes over as the main feature of the game. Any drive from SF to NY is going to take a huge amount of time but NFSTR breaks this down into feature filled, manageable stages, with a lot of the monotony of the uneventful parts of the journey being implicit, rather than endured.

With that said, those bizarre on foot sequences do make a return from time to time, where you have no actual control over Rourke, instead hitting buttons at the right time to keep the sequence flowing. The error margin here is ridiculously generous, to the point of even forgiving you for hitting the wrong button. 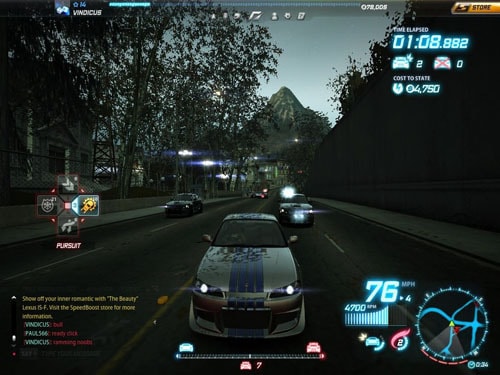 These QTE quirks are by no means a dominant feature, however, and racing stages are most often fun and challenge based. These challenges include overtaking ten cars before your reach the stage end; taking on one opponent at a time and maintaining a lead for a set amount of time. Other than this, the challenges are a little more traditional like getting from A to B against an arbitrary time limit.

These racing based challenges are all great, if not always terrible exciting, but others come in the form of challenges where racing skill will do you no good. Slightly more often than necessary, challenges take the form of avoiding gunfire from mob cars or helicopters and the scenery destroying havoc that ensues, while having no way to retaliate other than to passively drive out of the way of everything.

It’s in these challenges that the awkwardness of NFSTR is most felt. If a game is going to bring gunplay and environment warping into play, then to make it an option for everyone except you, the player, makes it somewhat frustrating. Games like Split/Second gave the clever illusion of you being an active participant in the reshaping of your surroundings, where The Run places you as the rat in the ever changing maze its script creates. 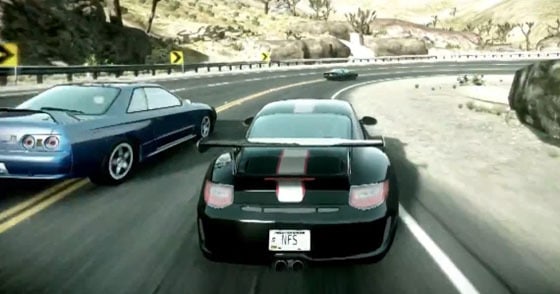 Autolog makes a welcome return, after its popular debut in Need For Speed Hot Pursuit, which is essentially a system that actively monitors the best stage times of folks on your friends list. By ‘actively’, we mean when you load up the game each time, you’ll get told right at the front end what has been going on with your mates since the last time you signed out.

These kind of stats have been available in games for a while now, but the genius of autolog does all the updating for you, rather than sit by while you look for updated top times yourself.

The multiplayer is also just as compelling as Hot Pursuit. Up to 16 players in a race at any time, with a reasonable frame rate and some neat comms options, make this a worthwhile addition to the game.

Overall we have to applaud EA Black Box for having a stab at trying to take the driving genre in a different direction, but we’re not entirely comfortable with the end result. The racing itself can be really exhilarating, with a real sense of open road freedom effortlessly evoked at times, but those restrictive exceptions rear their heads too often to make this an NFS classic.