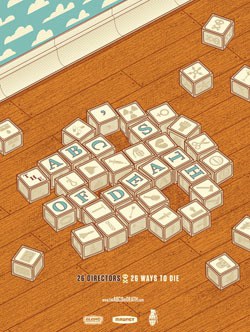 Previously on Short Film Showcase we brought you the stylish spaghetti western Damn Your Eyes. The director, David Guglielmo, contacted me recently to let me know about his latest short, T is for Toga! and I thought I’d share it with all of you fine people too.

It’s a classic slasher with a healthy dose of sex and violence, so probably not work-time (or family-time) viewing, but horror fans should love it. Like Damn Your Eyes, it sticks close to it’s roots, feeling like a true slasher movie rather than getting all ‘wink-wink nudge-nudge’ on us like a lot of short horrors tend to do (post-modernism is soooo 1990’s). It throws in a nice twist at the end too.

It’s not big and it’s not clever, but T is for Toga! is certainly a lot of fun.

I’m not embedding the video this time round though I’m afraid, I’m just providing a link to see it. The film has been made as part of a competition. There is an anthology horror film coming out called The ABC’s of Death, and they have 25 established directors all making a 4 minute film based on each letter of the alphabet. They are holding an open competition for the 26th film with the letter T… So David made T is for Toga!

The winner is to be included in the finished film, which already has theatrical and DVD distribution. It would be a great boost for David’s career, and will certainly help with the completion of his Damn Your Eyes feature. He’s trying to get as many votes as possible, so if you like what you see please make sure you vote for the film on the competition site.

You can find the film and competition entry details here: http://26th.theabcsofdeath.com/t-is-for-toga/