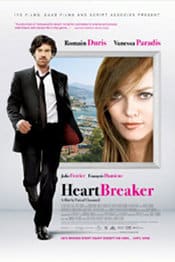 A huge box office success in it’s native France, Heartbreaker is a Gallic spin on the high concept romantic comedy genre made popular in Hollywood recently through the conveyor belt of Katherine Heigl and Matthew McConaughey vehicles.

Romain Duris plays Alex Lippi, a man with an unusual job. With the help of his sister and her husband, Alex earns his keep as a professional heartbreaker, getting paid by unhappy parents, siblings and close friends to turn women away from their unsuitable boyfriends or husbands. Work is good, with Alex’s charm winning over countless unhappy hearts around the globe, that is until Juliette (Vanessa Paradis) comes along. The problem is that her fiance Jonathan (Andrew Lincoln) seems impossibly perfect and the two appear to be completely in love. How could any man stand in their way? Her father has given Alex and his team only one week to stop Juliette from getting married and to top it all off the mafia are coming down hard on the wannabe Don Juan for the money he owes them.

Sounds predictable? Well unfortunately it is. After a promisingly cynical start as we see Alex successfully wooing a kind and beautiful girl away from her oafish boyfriend, the film gradually steers down a well trodden path, ending exactly as expected. You can see the film heading in that direction early on as the film begins to run out of steam about half way through, getting further more bland as time moves on. 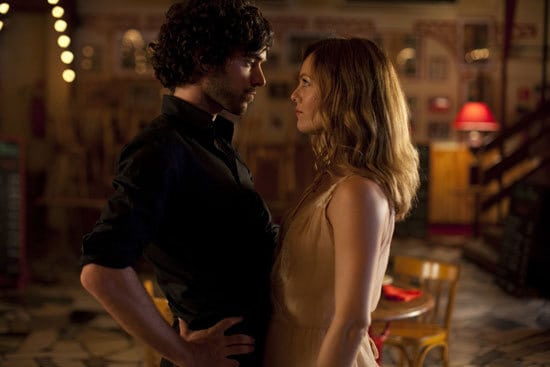 It’s not all bad though, the film does have it’s charms. Duris and Paradis make for likeable leads and they seem to suit their roles perfectly. It’s generally very snappy and stylish too, although as time goes on it begins to feel a little too slick for it’s own good, coming off as overly glossy and a little soulless. It’s exotic locations in Morocco and Monaco add a certain class to proceedings though.

The humour is simple yet generally keeps things rolling along in a lightly entertaining way. I do like the original concept and that is often put to good use, especially in the first half of the film. There are elements of typical French mugging on show, but overall the jokes are kept fairly universal (traditional French comedies can often be an acquired taste). This might make it more appealing to a mass audience, but it also unfortunately helps add to the uninspired air of the narrative.

On a whole it’s easy to lay into this film and find flaws (as I have), it’s not particularly original or witty, nor is it particularly memorable. Yet there’s obviously a reason why it enjoyed such success across the channel and that’s because it’s easy-going, light-hearted fun. So if fluffy rom-coms are what floats your boat you can do much worse. It’s French perspective does set it aside from most of the guff Hollywood spews out, but I imagine if it were all in English and starred Jennifer Aniston I wouldn’t be going as easy on it.

The DVD is released by Revolver Entertainment on 22nd November in the UK.

Buy Heartbreaker on DVD at Amazon