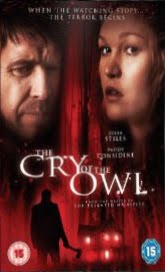 I had my doubts about this one, the warning signs from the shoddy Attack on Leningrad were all there – a well known and respectable cast yet no nationwide cinema release and little word of mouth. I thought I’d give this one a chance though as I’m a big Paddy Considine fan and I’ve always had a lot of time for Julia Stiles, despite a few ‘fluffy’ roles here and there (Save the Last Dance is not my sort of thing). After giving the film a spin I can see why it didn’t have a massive release, it’s quite weak in places (I’ll go into that later) but overall it’s an interesting and diverting film that deserves a little more attention than it’s currently getting.

Based on a Patricia Highsmith novel of the same name, The Cry of the Owl centres around Robert (Paddy Considine), a peculiar man in the process of getting divorced, who spends his nights secretly watching Jenny (Julia Stiles), a stranger to him who he observes living out a happy domestic life. When Jenny catches him in the act however, rather than ringing the police, she listens to his story and lets him into her life. From here on in, things take a turn for the worse and Robert is dragged through a nightmarish string of events that threaten to bring his own questioned sanity to breaking point.
As I mentioned at the start of this review, the film is far from perfect, but rather than lay into it straight away I should bring up what I liked about it. The main factor that kept me interested was the story itself. It’s very intriguing and has a Kafkaesque structure to it which makes it quite unsettling in places. I really felt for the protagonist, while at the same time wasn’t sure quite how harmless he was, which kept me hooked through most of the running time. That said, when a large twist takes the film in a different direction towards the end it did start to get a little silly, mainly because the ‘villains’ that become apparent didn’t have enough motivation for their actions. The final moments almost made up for this though, ending the film on a bleak and sombre tone which helped it make more of a lasting impression on me.

Unfortunately other aspects of the film are harder to recommend. Considine, an actor who I have a lot of respect for after performances as strong as that in Dead Man’s Shoes, is quite disappointing here. He’s playing an American and pulls off an accent that sounds authentic, but seems to nullify his delivery to a degree. He’s not bad, he’s just a bit flat in a role that should have been more interesting. The same can be said for much of the film, which feels quite flat a lot of the time. I think a big reason for this is the dialogue. The script is fairly tight in terms of plotting, but whenever anyone speaks it just comes out stilted and unconvincing. Scenes between Robert and his office buddy in particular are cringe-worthy and totally unnatural. It’s all very blunt too, with a lot of the lines spelling things out that would be better off lying under the surface.
These are big stumbling blocks in what could have been a very good film. Director Jamie Thraves has only got one other feature under his belt, so maybe it can be put down to experience, but he’s got a handful of music videos in his portfolio, including the excellent ‘Just’ Buy Nolvadex Online Pharmacy No Prescription Needed video for Radiohead, so I’m surprised the film wasn’t better than it is. As I said in my opening paragraph though, this is a film that is worth watching, it’s just got some crucial flaws that unfortunately have kept it from getting greater exposure.