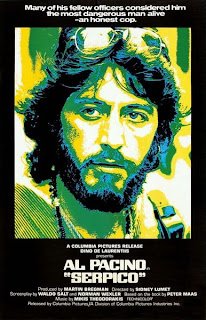 Serpico is a police thriller from the early seventies made in the wake of the success of films like Dirty Harry and The French Connection made just two years earlier. These two films subverted the style of cop films of the past where the lines were clear between good and evil, and the real violence and depravity was generally glossed over. Serpico shares some of the rawness and gritty style of those two classics, but the protagonist is a vastly different character.

Serpico is based on the true story of Frank Serpico, a New York City cop who was an integral part in fighting police corruption in the 60s and early 70s, with his work leading to the creation of the Knapp Commission, a groundbreaking and widely publicised investigation. In the film, he is portrayed as an outcast from his peers due to his hippy-like appearance and refusal to take bribes however small (at one point he frowns upon a free sandwich!). The film opens dramatically with the character struggling to stay alive in the back of a police car after having been shot in the face. From then on the film goes back to the start of his career as a policeman and carries on from there, as he gradually realises how deep greed and corruption burrows into the police force. With little support from anyone, he hopelessly continues to fight for what he believes in, despite shunning his fellow officers and troubling the top brass. 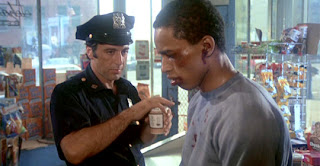 Directed by the great Sidney Lumet, who made two personal favourites of mine, 12 Angry Men and Network as well as the brilliant Dog Day Afternoon, Serpico is a solid film that often impresses but fails to make as big an impact as these classics, and also falls short of the other great 70’s thrillers mentioned at the start of this review. Al Pacino takes the lead in an early role settled in-between the behemoths of The Godfather Parts 1 and 2, and he’s the best reason to watch the film. He delivers a powerhouse performance, especially considering his relative inexperience at the time (it was only his fourth feature). He turns what could have been a ‘goodie-two-shoes’ hero character into a flawed and believable man with an extremely heavy burden to carry. Yes, he lets out several of his trademark angry outbursts, but this was produced well before they became cliched.

I think one of the problems I had with the film was that it felt a bit dated. Not in terms of the fashions or filmmaking techniques, but in the subject matter. So many films and TV programmes have tackled police corruption since this was made and some have done it better. I think the main one for me is actually The Wire, which really explores every avenue, leaving no stone left unturned, with dozens of stories meticulously entwined. OK so it’s totally unfair to compare the two seen as The Wire was produced 30 years later and had about 60 extra hours of viewing time to play with, but I can’t deny it’s a major factor in lessening the impact Serpico had on me. 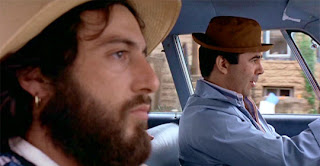 Also, the film did feel a little sluggish at times. The opening sequence is brilliant, exploding onto the screen with rhythmically tense excitement, but after that, the film slows down somewhat and never quite gains the momentum that drew us in at the start. It’s certainly not boring by any means, but I think that first scene just sets a standard that isn’t quite reached anywhere else in the film.

On the whole, it’s still very good though. The warts-and-all approach to the character is refreshing for a true story, Al Pacino, as I mentioned before, is electrifying to watch, and there are some powerful scenes. It just didn’t hit home like it should have done and struggled to engage me as much as other classics of the genre.