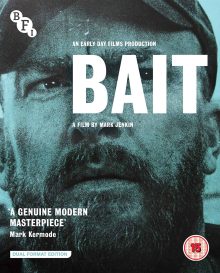 Mark Jenkin has been making films for close to two decades but these have been little seen, cropping up at festivals and winning a few minor awards but never gaining any sort of commercial release of note. However, when he completed a project he’d been gestating since the start of his career, he finally got noticed. Bait has been racking up awards and nominations during its festival run last year and is enjoying great reviews in the British press, with Mark Kermode being a particularly vocal admirer, naming it his favourite film of 2019. Just a week or so ago it also got nominated for Outstanding British Film of the Year and Outstanding Debut by a British Writer, Director, or Producer at the BAFTAs. With this level of praise, it was high up my watch-list, so I got hold of a copy of its forthcoming dual-format Blu-ray & DVD release from the BFI. Below are my thoughts on the film.

Bait is set in a coastal Cornish village where fisherman Martin Ward (Edward Rowe) is struggling to ply his trade. The main setback is the fact his late father’s fishing boat is being used by his brother Steven (Giles King) to run leisure cruises to tourists. The tourism industry is causing several issues in the village in fact. For one, Martin regularly leaves his beaten-up van illegally parked outside his old family home, which is now being used as a seasonal holiday cottage and Airbnb-style rental. The new owners, the Leigh family, aren’t happy about Martin’s van getting in the way of their renters and creating an eyesore, so conflict ensues.

Local barmaid Wenna (Chloe Endean) is also fed up of the wave of middle-class holiday-makers invading the town during the summer, mouthing off at them any chance she gets, landing her in regular trouble. The village divisions are causing internal conflict in the Leigh family too, with son Hugo (Jowan Jacobs) angry that his sister Katie (Georgia Ellery) is shacking up with a Cornish local, Steven’s son Neil (Isaac Woodvine). 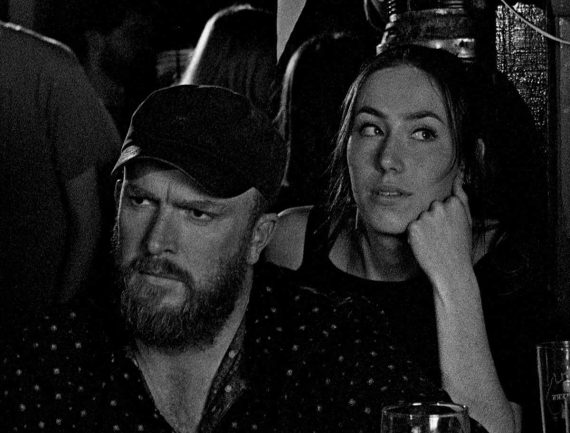 In amongst all this clashing of values, Martin is trying to tutor Neil in fishing so he can follow in his grandfather’s footsteps and not cater to the influx of tourists as his dad is. Steven has grown distant from both Martin and Neil after his wife died, so does little to change his son’s mind.

The most instantly striking aspect of Bait is its style. Jenkin shot it in black-and-white, using a vintage, hand-cranked 16mm Bolex camera, processed the film himself by hand and post-synced all of the dialogue and sound effects. This gives everything a weathered, old-fashioned look and the approach initially feels like it’s referencing black and white British TV dramas from the 50s and early 60s.

I must admit, when I first saw a trailer for Bait, I was put off by this style. It looked a bit forced and made the acting feel stilted and unconvincing. However, it didn’t take much time at all for me to fall in love with what Jenkin had done once I actually watched the film.

I expected the dated technical approach to create a rough-and-ready, ugly-looking, gimmicky film that forces you to concentrate on the story. However, cinematically the film is fantastic. Bolex cameras only shoot about 2 and a half minutes of footage at a time, so there are few attention-seeking long takes. Instead, Jenkin uses short, sharp shots, tightly edited to economically tell his story. In this sense, there’s an air of Bresson to the film, which Jenkin acknowledges in the included commentary and Q&A. However, as he also points out, Bresson wouldn’t have been happy with some of his stylistic flourishes. Most notably, Jenkin often splices in brief flash-forwards to hint at what is to come and includes appearances from Martin and Steven’s dad as either memories in the former’s head or spiritual visitations. These near-supernatural post-modern flourishes, again as mentioned in the commentary, bring to mind the work of Nicolas Roeg, even if elsewhere you wouldn’t connect the film with his style. 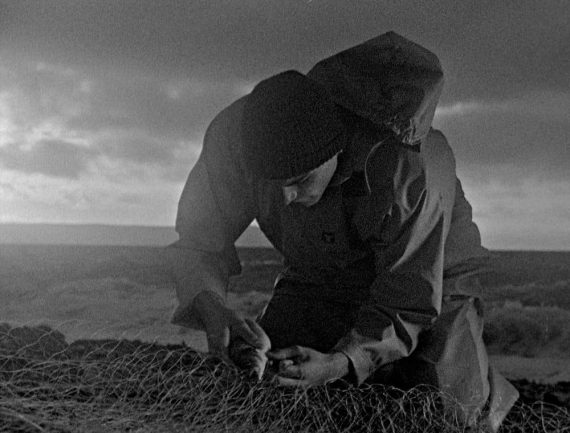 So, even though Jenkin has recognisable influences, he brings disparate ones together to create a singular vision. Most importantly, it’s a vision that is incredibly effective at delivering an emotionally and thematically satisfying film. The taut nature of the editing and heavy use of extreme close-ups makes for an intense experience. You wouldn’t expect parking disputes and disagreements between local villagers and wealthy holiday-home owners to make for gripping cinema but, believe me, you’ll be on the edge of your seat in places.

The theme of division and examination of the effects of gentrification are timely and fascinating too. You get the feeling Jenkin sides with the locals (largely due to some enjoyably snarky digs at the tourists), but he doesn’t let them get off scot-free either. Martin’s insistence on holding onto his fishing heritage (without a boat) and his disregard for the Leighs both come across as purely stubborn at times. Although the locals largely look out for each other, they often do so quite foolishly and can be selfish when it comes down to it. Martin’s overcharging for the handful of fish he sells to a local pub shows both sides of this, as he’s taking the proverbial asking for that sort of money, but the landlady doesn’t have to say yes.

On top of being surprisingly tense and thought-provoking, the human drama within Bait is equally as effective. Although the post-synced dialogue makes the performances seem odd at first, you soon settle into it and to be honest there isn’t a huge amount of dialogue anyway, so the actors come across well, doing a lot with facial expressions and body language. Once again, the editing and visual storytelling are key to keeping the film dramatically satisfying, and there’s a good dose of comedy injected into it to keep the characters engaging and human. 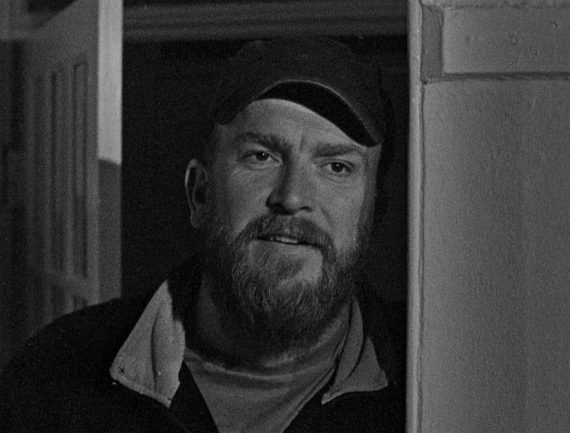 Overall, it’s stripped-back filmmaking at its finest. Tight as a drum, telling an engrossing story that’s simple on the surface but tackles a current, relevant issue with maturity and sensitivity. Mixing stylised and naturalistic approaches, it’s unique in presentation yet still has a warmth and relatability. It’s a fine piece of filmmaking that places Jenkin firmly on the list of British talent to look out for in the future, even if he’s been at it a while.

Bait is released on 20th January on dual format Blu-Ray and DVD in the UK, released by the BFI. The picture quality is difficult to judge due to the way the film was shot, but away from the flecks and burnouts you get from the process of using a vintage Bolex camera with hand-processed 16mm film, the image looks detailed and grain looks natural. The audio comes through nicely too.

There are a handful of extra features included in the set:

– Presented in High Definition and Standard Definition
– Feature-length audio commentary with director Mark Jenkin and film critic Mark Kermode
– Bait Q&A with Mark Jenkin (2019, 33 mins): filmmaker Mark Jenkin in conversation with Mark Kermode, recorded at BFI Southbank
– Dear Marianne (2015, 6 mins): a Cornishman’s travels in Ireland, through Wexford, Waterford and Cork in search of the familiar in this short film by Mark Jenkin
– The Essential Cornishman (2015, 6 mins): Mark Jenkin’s film is an homage to the spontaneous prose of The Beats, from the mythical Cornish west
– The Road to Zennor (2016, 2 mins): poetic travelogue by Mark Jenkin of a familiar journey to the small coastal town near St Ives
– The Saving of Bill Blewitt (1936, 25 mins): a charming docu-drama that sees two Cornish fishermen managing to save enough money to replace their boat after it’s lost at sea
– Scenes on the Cornish Riviera (c.1912, 19 mins): providing an early visual record of Cornwall, this Great Western Railway-sponsored tour visits among others, Saltash, Newquay, Truro, Falmouth and St Ives
– Trailers
– **FIRST PRESSING ONLY** Fully illustrated booklet with writing by director Mark Jenkin, writer, programmer and lecturer Jason Wood, film critic Jessica Kiang and writer and curator Tara Judah; notes on the extras by Katy McGahan and full film credits

The commentary and Q&A cover largely similar ground, but both are excellent, offering a detailed look at the production. The commentary is the strongest of the two, due not only to its increased length but also because of the warm and friendly rapport between Jenkin and Kermode. The Q&A shares some of this too, but the presence of an audience adds a little pressure so Jenkin is a fraction less relaxed.

It’s great to see some of Jenkin’s earlier shorts here too and, as usual, the BFI have thrown in a few interesting, related films from the archives. The booklet is also worth a mention, offering a couple of thoughtful analyses of Bait and the short films included in the package. It also contains a director’s statement, technical information and detailed credits.