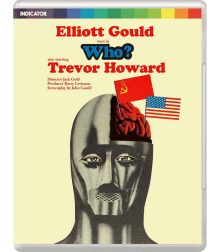 Top American scientist Lucas Martino (Joseph Bova) is mortally injured in a horrific car crash in East Germany and the only way to save him is for parts of his body to have artificial implants. After finding out that Soviet Union scientists were involved and potentially interrogated Martino, the American Government enlists FBI agent Sean Rogers (Elliott Gould) to find out if he really is who he says he is or if he is, in fact, a Soviet spy. This scepticism is raised for a variety of reasons, primarily that they cannot fully recognise Martino due to the metal mask covering a large portion of his face due that is supposedly keeping him alive. Is he lying and helping the Soviets and East Germans spy on America or is just lucky to be as alive?

What drives Who? is the work from the cast, Gould gives a strong performance with his character trying to give nothing away to Martino that he himself acts more like a robot than his prisoner. It is an interesting choice to make as the film progresses his emotions start to betray him as he simply cannot remain stoic to the strife that Dr Martino is obviously going through. Bova is the true star of the film however as he has a lot of acting to do under the restrictive mask and is able to show his pain and frustrations with aplomb. These emotions come not just from what was done to him, but also to how he is being treated now by his own countrymen, the character doesn’t know what else he can do to show he is being honest as he is severely limited due to his new body.

Depending on whether you saw this film on TV or on VHS or DVD you will think “hey, wasn’t this under a different name?” you are very much correct on that one. Who? Previously lived under the title Robo-Man… Not at all to be confused or linked with Robocop in anyway… wink wink. 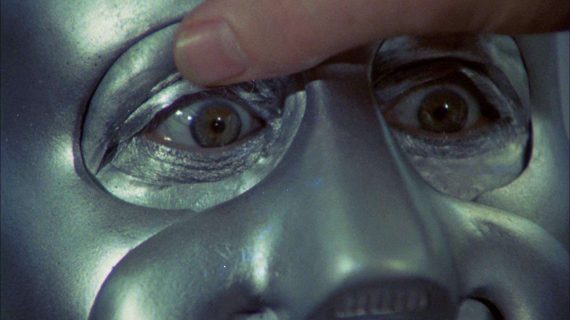 Some science fiction stories date very well and in fact, some become more relevant as time goes by (list a few films) Sadly, Who? does not date as well as it could, which is not the fault of the cast or the story in the slightest, both are very strong and drive the audience to want to know the conclusion. I could very easily see Who? Being remade within the next decade as the story is still quite prevalent. When we are altered physically, are we still really ourselves and when people begin to treat you as if you are not who you know you are, what effect does that have upon you?

It is the effects and poor framing of the film that lets the whole piece down. The majority of the budget should have been on Dr Martino’s “new” body, yet all we got was some very cheap costume work and silver body paint was and the lack of budget that costs the film. The direction from Jack Gold is a little pedestrian, but I have to assume that the choices he made were to make everyone apart from Dr Martino as artificial as possible. These are small complaints however, as when the film gets going, you do become invested on the truth and that is what makes this a classic film that should be revisited again and again.

Who? actually falls into a variety of genres during its short running time. Its story is very much a cold war thriller, but the science fiction aspects are ever present and then we have a large amount of mystery, is he who he says he is and if so, how has his treatment from his own countrymen affected him? Based on Algis Budrys 1958 novel of the same name, Who? manages to remain faithful to the novel, with a few story structure changes and two rather bizarre ones are the lead characters names Shawn Rogers changed to Sean Rogers and Dr Martini changed to Dr Martino.

Who? ends up being a very interesting character study and is overall a very solid film with an awful lot more positives to it that, with a bigger budget behind it, could have been something truly special.

The BEHP Interview with Jack Gold (1990, 94 mins): an archival audio recording, made as part of the British Entertainment History Project, featuring the director in conversation with Norman Swallow and Alan Lawson

The Man Behind the Mask (2019, 21 mins): writer and critic Kim Newman explores the life and career of acclaimed science-fiction author Algis Budrys

As always with Indicator, you can expect the highest quality of a remaster, though for a film such as Who? where the budget was not generous to their “robot-man” this can be quite harsh to look at. But, as previously mentioned, the story takes you in so well that the costume issues are tucked away to the back of your mind.

Elliott Gould provides some commentary snippets to specific scenes and it was interesting to see how he took on the role of Rogers as well as adding tidbits about people behind the camera which was nice to see from an actor. Director Jack Gold provides a more technical commentary than I expected which leaves it a little dry on first listen. Sadly there is limited talk about the writing of the film and why certain structure choices were made in comparison to the novel. The biggest miss of the features side is that there is no commentary from Bovas who passed away in 2006. It would have been a treat to listen to his thoughts during the film due to the performance he gave to the audience.

There are a number of featurettes treats for us as we have a wonderful audio recording interview with Jack Gold that lasts for over an hour and a half. A new feature on this Blu ray is the featurette about Algis Budrys from Kim Newman. Running at just over 20 minutes we get to learn a bit more about the author, who if I was honest I had not heard of before this review. With films such as Who? there would be the expectation of a minimal extra feature section, but we are presented with an abundance of material here, an overall great package.

Who? is available on Indicator now.