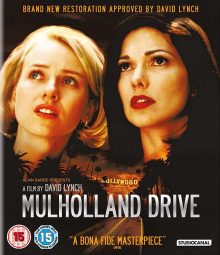 Last year, BBC Culture ran a survey of 177 film critics from around the world to determine what they felt were greatest films of the 21st Century. The well-publicised results found David Lynch’s Mulholland Drive claiming the top spot. It rejuvenated interest in the film, particularly as Lynch’s continuation of his Twin Peaks series was announced around the time. Studiocanal jumped on this by giving the film a new restoration and re-releasing it on Blu-Ray with a few added special features. I haven’t seen the film since the early 2000s, shortly after its original home release, so I’ve been keen to give it a rewatch, particularly with all the Lynch love going around with the new series of Twin Peaks starting last night. This gave me the opportunity I was after then, so here are my thoughts on the film.

Giving a synopsis of Mulholland Drive is a tricky business, as it might depend on your interpretation of the plot and the latter third in particular gets pretty surreal. However, to avoid spoilers or debatable interpretations of the film, I’ll focus on the basic setup in the first half. Here we see an actress, later referred to as Rita (Laura Harring), escape being shot when she’s involved in a car accident on the titular Hollywood road. She’s left with amnesia and wanders into an apartment currently occupied by wannabe actress Betty (Naomi Watts), who just arrived in town. Betty wants to help Rita, so the two set about investigating, to find out who she is and what happened to her. Meanwhile, film director Adam (Justin Theroux) is struggling to get his latest project off the ground as some shady mafia types seem to have a stranglehold over production, forcing him to hire an actress as the lead against his will. His life is further troubled by the discovery of his wife in bed with another man. His path converges with the two actresses later on, as their journey takes increasingly dark and puzzling turns. 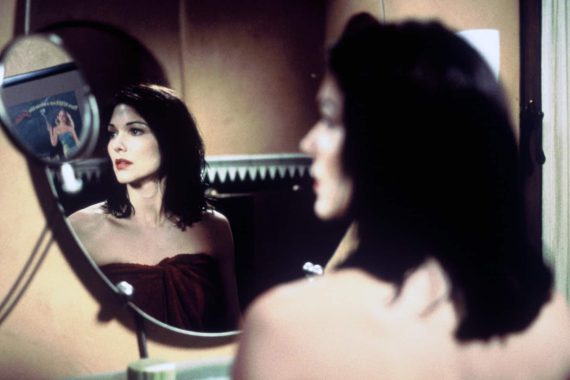 It sounds pretty straight forward when put like that, and at first the film does seem fairly pedestrian (after the strange opening sequence which seems less strange as part of it is explained near the end) but, this being David Lynch, it all gets quite confusing in the later stages (after a major twist in particular). There are several unusual sequences scattered throughout in fact and the whole tone is off beat and unusual. Like with a lot of Lynch’s films, the performance styles are heightened, giving a weird hammy quality that I find can take a little while to get used to. The film is clearly skewering the Hollywood dream though so this style of acting fits as a sort of satire of the stereotypical lower tier junk churned out in Tinseltown. The scenes where Adam’s film is sabotaged show Lynch has a distaste for the studio system too. There’s also a bit of a Hitchcock influenced tale of obsession at play as Betty’s interest in Rita grows stronger and the two begin to look more like one another.

So, although many have found the story difficult to decipher (though one of the Blu-Ray features might put an end to that), there are plenty of possible readings to make throughout the film, making for a rich and fulfilling experience.

The film is incredibly engrossing too, even when you might lose track of what you’re watching. The initial mystery hooks you in, but its the exquisitely built tension and pitch black humour that keeps you there. A seemingly detached scene of a botched assassination stands out in particular as a gloriously funny aside to the otherwise dark and moody goings on. The film is filled with memorable moments in fact. Betty’s jaw-droppingly good audition scene proves the film’s heightened performance style elsewhere is totally intentional and many would argue that scene alone is what launched Watts into stardom. Also show-stoppingly powerful is the Club Silencio scene when Rebekah Del Rio sings a phenomenal rendition of the Roy Orbison song “Crying” in Spanish. It’s a spine-tingling moment, as are several scenes in the film. 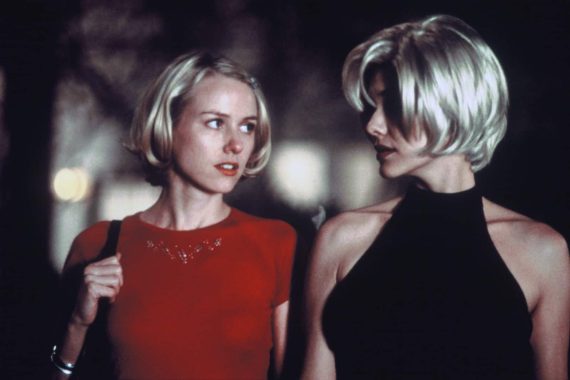 There’s much more that could be said about the film, but it already has elsewhere and I’m far from being a Lynch expert, so I’ll leave my review at that. To sum up though, I’d say the film is a bewitching, surreal indictment of Hollywood and those who dream of making it big there. It’s often difficult to decipher, but that’s all part of the fun. I may not have known exactly what I was watching all the time, but as soon as it finished I wanted to put it on again to find out. Whether or not it’s the best film of the 21st Century is up for debate, but in my opinion it’s certainly up there.

Mulholland Drive is out on 22nd May on Blu-Ray & DVD in the UK, released by Studiocanal. I saw the Blu-Ray version and the film looks and sounds great.

There’s a lot of material here, providing a decent set. It being so spread out into many featurettes is a little cumbersome and means there’s a fair bit of repetition, but largely the pieces are worthwhile. On the Road to Mulholland Drive and the Criterion interview are standouts.

One extra I’m torn about though is Back to Mulholland Drive. In this video, the director of the piece sets out to decipher the plot. He does so very effectively and his breakdown/theory seems more than sound. However, in doing so it kind of spoils the air of mystery and confusion many find so intoxicating about the film. Instead it makes the story feel rather straightforward. Who’s to say he’s right though and it didn’t cause me to think any less of the film.