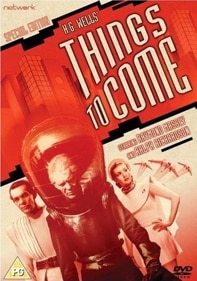 Tying in nicely with my recent review of Island of Lost Souls comes another early H.G. Wells film adaptation, Things to Come. What makes this later film especially interesting though is that Wells himself adapted his novel The Shape of Things to Come for the screen, making it his first screenplay credit (his only other being The Man Who Could Work Miracles later the same year). Unfortunately, like Island of Lost Souls before it, this sci-fi classic suffered a troubled production. Wells seemingly got more control over the filmmaking process than any other screenwriter at the time – his fame meant that his name was plastered all over the film’s marketing material and he supposedly supervised much of the film’s production. Unfortunately, the studios didn’t seem to respect his work and the reported original 130 minute rough-cut was first cut down to just under two hours for the BBFC, then released at 108 mins, later cut to 98 mins and again down to 96 minutes for the US version. Over the years, even the slightly longer cuts got lost along the way and a 92 minute version was the best you could get on DVD until Network came along and released this newly restored version, bringing together all surviving elements to make a polished 96 minute cut as well as an option to ‘virtually’ watch the film as originally intended (see the bottom of the page). It’s a shame the full original version no longer survives, but fans of the film should be glad to hear that everything has been done to get this new Blu-Ray release as comprehensive as possible.

Things to Come charts 100 years of history in Everytown (it’s not the most subtle of films – I’ll get to that later). Opening at Christmas 1940, the townspeople try their best to enjoy the festive period while the threat of war looms. When it does break out (that very night), all hell breaks loose and the town is left in ruin. The war rages on for thirty years and the entire country (possibly the world) is decimated and pestilence eats through its remaining inhabitants in the form of the ‘wandering sickness’ (which basically turns people into zombies). We move forward to 1970 and although the war looks to have ended, lands have turned to mob rule and ‘the Boss’ (Ralph Richardson) is in charge of what’s left of Everytown. He’s an aggressive sort who wants to fight for supremacy over local tribes and the other inhabitants begrudgingly follow. The arrival of a strangely well dressed and groomed former townsman Cabal (Raymond Massey) in a high-tech flying machine turns things around though. Coming from a seemingly infallible group of peaceful people who call themselves the ‘Wings Over the World’, Cabal manages to convince a couple of the locals to turn against their ruler and eventually he is overthrown. Moving further on to 2036, Everytown has become a sort of utopia, pushing scientific discovery to it’s limits, peaking with a giant gun which can fire a rocket into the depths of space. Unfortunately, not all of the future residents believe this is something man should be working towards. 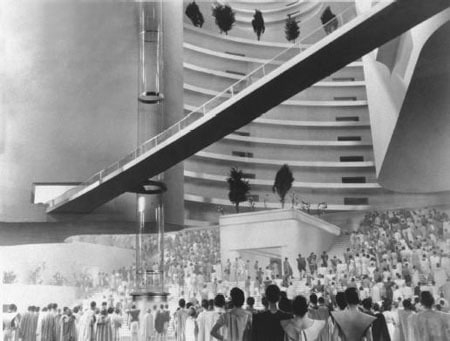 Things to Come is a fascinating watch for a number of reasons, but it’s not really a great film. Most notable on the positive side of things is the production design. The giant sets, model work and special effects were way ahead of their time and much of it still looks a treat, if not always all that realistic. The last third where we see the future of Everytown is where this really shines. As well as the sets, props and costumes, some of the camerawork and editing techniques are groundbreaking too. A montage that bridges the gap between 1970 and 2036 is full of abstract imagery and rhythmic editing that wouldn’t look out of place on an advert today (albeit a decidedly retro one). The high contrast lighting in the dark early sections look great too. The bombing of Everytown near the start of the film is especially impressive – the fast cutting carnage on display and multitude of explosions make director William Cameron Menzies seem like a prototype Michael Bay.

The themes and debates of the film are quite interesting and lofty for the time too. Playing with the idea of the Hindu concept of the three forms of man – the builder, the destroyer and the preserver (or ‘yes man’), Things to Come plays out like an anti-war movie with debates on man’s lust for progress as well as power. Clearly Wells sides with the scientific, but there is mention of this coldly clinical existence destroying the beauty of art. Other arguments against progress put out by the ‘destroyers’ are rather feeble, but at least a debate is there, providing something to chew on.

Unfortunately, as great a writer of novels as Wells is, his work doesn’t translate as effectively to screen. His messages are far from subtle and the dialogue is horribly overwrought and unnatural, with characters far too often spouting diatribe and not actually communicating. What doesn’t help are the performances, which are painfully wooden. Ralph Richardson is fun to watch as the evil dictator and rebel rouser, but everyone else is pretty bland. 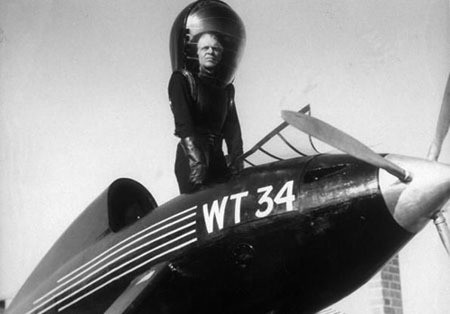 The plot of the film is a bit weak too and I found myself fidgeting a lot as I lost interest in events on screen. To be fair, this is most likely down to the heavy cutting of the film by the studios. Obviously unintentional jump cuts are a clear sign of this meddling and it’s highly likely that the storytelling wouldn’t have been nearly as flimsy with that extra half an hour or so reinstated.

All in all, Things to Come has not totally stood the test of time. Yes, as a visual spectacle it’s undoubtedly revolutionary and it certainly has interesting elements in its writing, but as a whole it’s marred by flat performances, some blunt preaching and obvious studio butchery. It remains a fascinating piece of cinematic history, but unfortunately falls short of the ‘enduring masterpiece’ honour that something like Metropolis holds.

Things to Come is out 18th June an a 2 disc Blu-Ray & DVD set released by Network Releasing. The film has been restored from the longest existing version and visually the work that has been done is fantastic. The picture has strong contrast and detail without looking scrubbed or manipulated. The sound doesn’t fare quite as well unfortunately. The whole soundtrack sounds very echoey and, although it has been cleaned up, there are still signs of deterioration with sections often sounding unclear.

The set is loaded with special features. Unfortunately I didn’t get the bonus disc to look through all of these, but on paper it all sounds great. You get a ‘virtual extended edition of the film where you can have added text and images from long missing and unfilmed scenes to fill in the gaps left by the studio. There’s an audio commentary by Things to Come expert Nick Cooper, which was on my disc and proved most informative. There’s a 25 minute documentary, On Reflection: Brian Aldiss on H.G. Wells, an interview with actor Ralph Richardson, The Wandering Sickness; an original 78rpm recording, a PDF of the original script, a trailer and an extensive HD image gallery.

If that wasn’t enough you also get an extensive booklet in with the set, which again I didn’t get a copy of, but in the past these have proved worthy additions to such releases.

Fans of the film have never really had it so good. Only the sound lets it down a bit, but I imagine the chances of improving it much more, this far down the line, is unlikely.