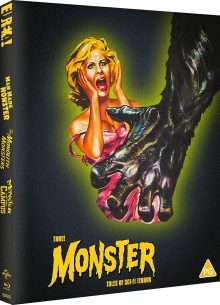 Eureka Entertainment has released a very enjoyable trilogy of vintage Universal sci-fi horrors from the 1940s and 1950s on Blu-ray for the first time, as part of their Eureka Classics range. A fan of old school monster movies myself, I was happy to delve into the collection and here are my thoughts on each film in turn. 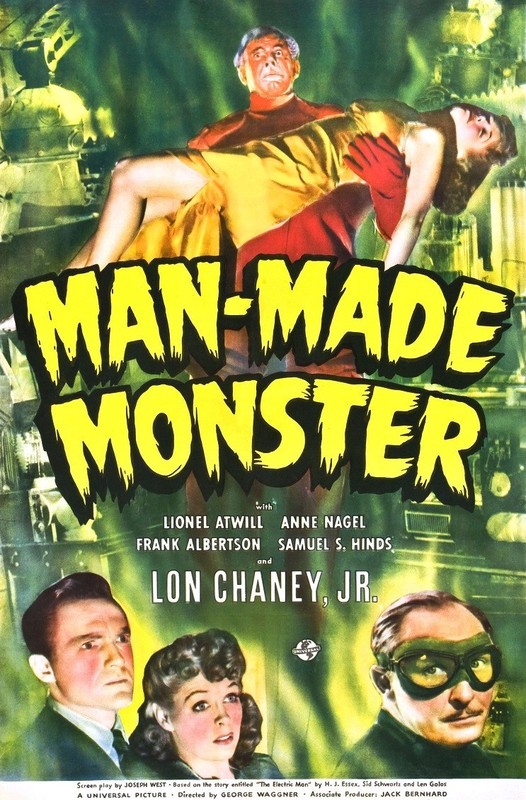 Genre favourite Lon Chaney junior makes his genre film debut with this rather daft B movie from the Universal vaults. Chaney plays Dan, a carnie who has a side show whereby he plays with electricity. Unfortunately for the rather simple-minded Dan, he’s involved in a bus accident whereby the vehicle crashes into an electrical pole and everyone apart from him are electrocuted, bringing Dan to the attention of mad scientist Dr Rigas (Lionel Atwill), who’s trying to create an army of obedient zombies who’ll do his bidding, as you do. After a series of tests Rigas forces Dan to kill the doctor’s business partner, and frames him for the murder. Poor Dan is sentenced to die by electric chair, but that only causes him to get a bigger charge and he ends up glowing like the ‘Ready-Brek’ man, able to kill anything living he touches; clearly not a desirable way to live! He returns to the estate of the not so good doctor for answers/payback. Based on a story by H. J Essex called ‘The Electric Man’, Man Made Monster cracks on at a fast pace, delivering what it says on the ‘tin’, and offers some early Chaney havoc before he became famous for his roles in The Wolf Man and Ghost of Frankenstein. He’s actually pretty good in this and kind of essays his previous role as Lenny in John Steinbeck’s classic Of Mice and Men. Equally as entertaining is Lionel Atwill, playing the villainous Dr Rigas, and Samuel Hinds who plays fellow doctor/business partner Dr Lawrence.

Man Made Monster is definitely worth a watch (or three) and delivers on its scientifically bent horror concept. Probably the most original concept in this set, The Monolith Monsters is also, sadly, the least fun as it’s all a bit too po-faced and overly serious.

Fragments of a large meteorite end up landing in the desert near a small salt-mining town. It’s not long before said fragments start to grow and spread as they ‘feed’ off the silicon they absorb from the local sandy soil and also from the careless humans that they come into contact with. However, this process can only happen when the fragments come into contact with water; hence the final act sees our local hero type, Dave Miller (Grant Williams, better known for his role in The Incredible Shrinking Man) trying to redirect a nearby dams’ water through the salt tips before it barrels into the ‘monolith monsters’ that are ‘marching’ towards the soon to be doomed town. In fact, the hero’s solution to the problem doesn’t really make much sense when you think about it, although some ad hoc experiments in the laboratory confirm a theory he and some others have and he comes up with way to replicate these on a larger scale. The lovely Lola Albright supplies the sassy love interest, although she isn’t really given enough to do here, and there are some cool model effects shots, replete with lots of very surreal images of the ‘monster’ crystals growing taller than nearby hills and then falling forwards in a menacing and kind of mesmerising way.

The Monolith Monsters is still worth a watch even though there’s limited appeal in the ‘creatures’ themselves who lack personality and become quite boring after a while. 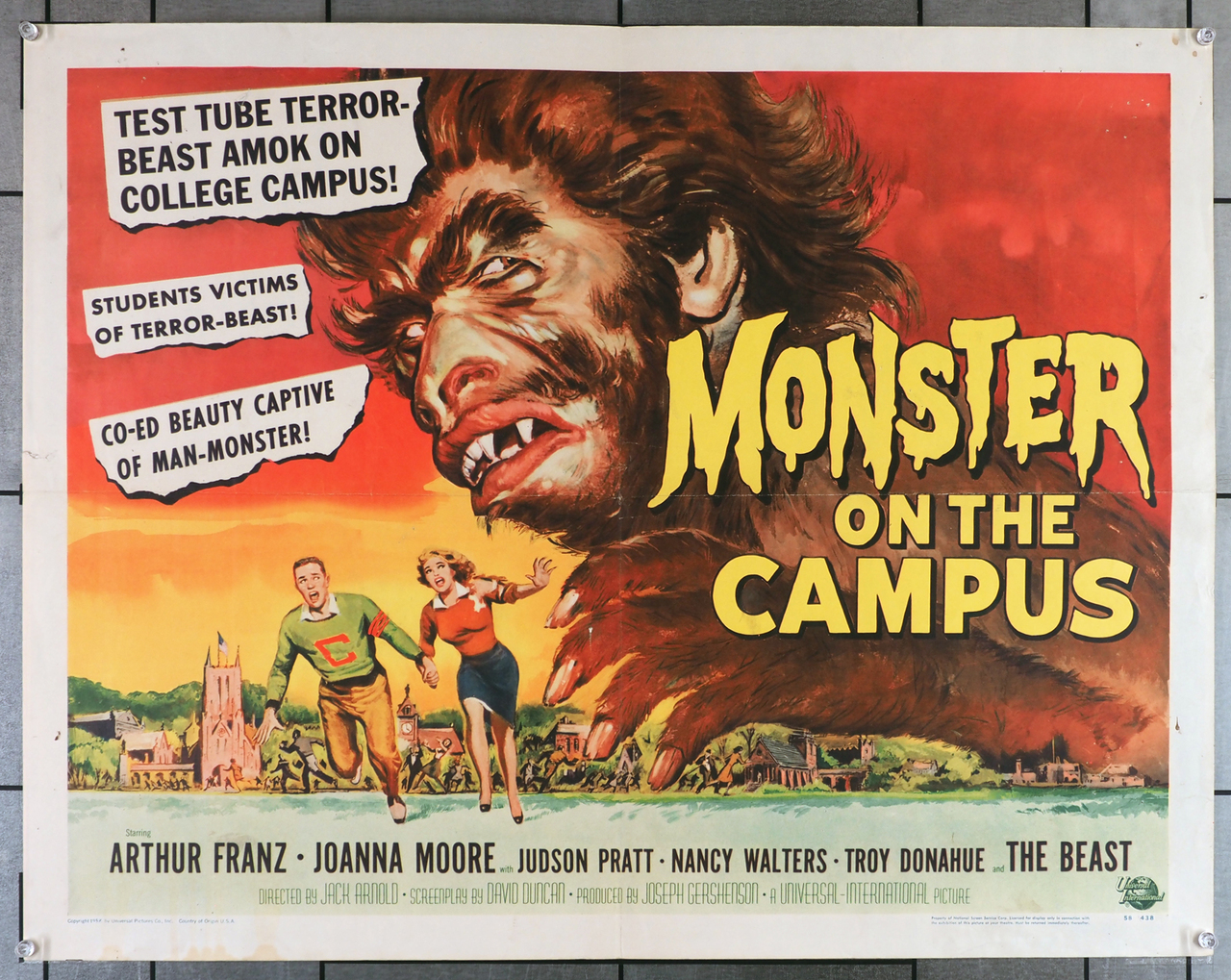 The most recent of the trilogy sees Professor Blake (Arthur Franz) accidentally cutting his hand on the teeth of an ancient Coelacanth fish that he’s had imported to help with his lectures, and soon after finds himself changing into an aggressive caveman, of sorts. His dog, after drinking some of the water the fish was stored in, is turned into an equally aggressive wolf-like creature, while a dragonfly, that bites the fish, increases in size, five-fold. Before the audience can begin to pick holes in the flimsy plot, the Blake creature (now played by stuntman Eddie Parker) is shot by police, which goes to prove the hip professor’s theory to his disbelieving colleagues and his love interest that it was indeed him who was committing the murders that had been occurring throughout much of the film’s runtime.

Monster on Campus is a fun slice of hokum with a fair amount of unrealistic gore, considering the movies age. The dragonfly special effect is actually pretty good, as is the acting, even though the script itself isn’t great. 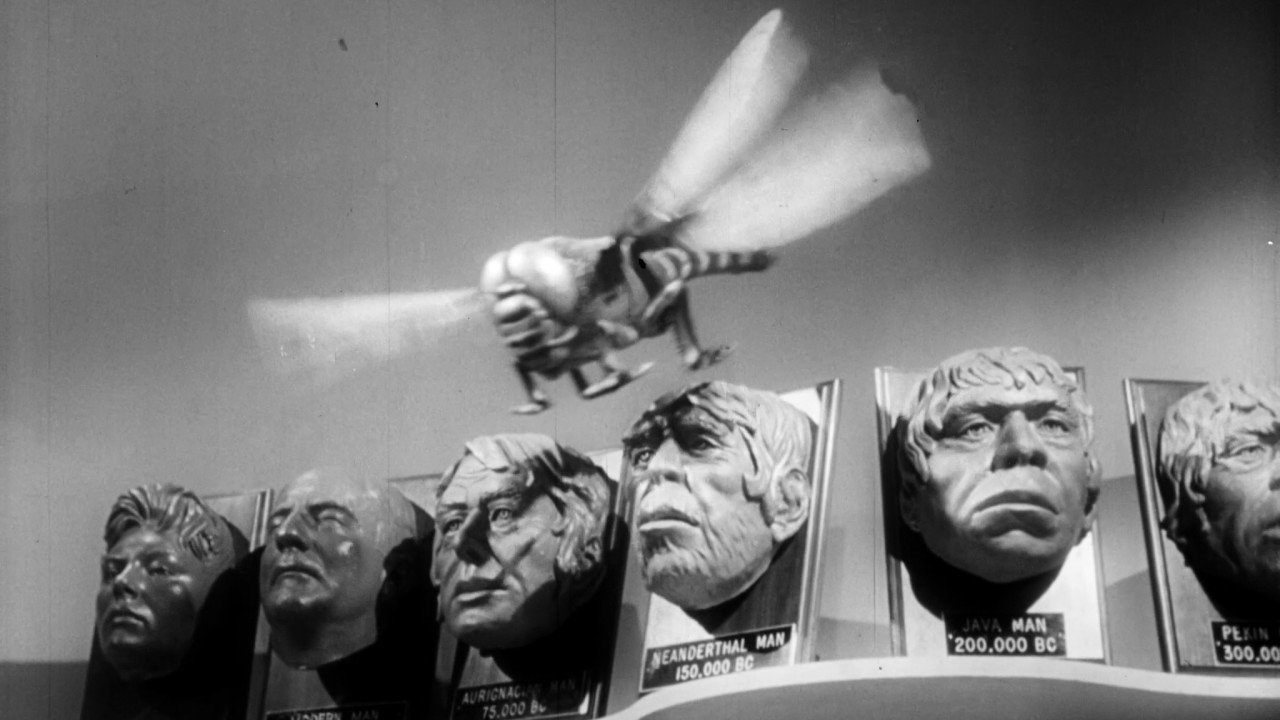 Audio commentary with Steve Jones and author/critic Kim Newman – These two very informative writers provide loads of interesting facts regarding the film including the fact that the dog in the film had a 20 year career in Hollywood and that the original story that the film was based on was bought for $3,000.

Audio Commentary with Kevin Lyons and Jonathan Rigby – Again two gemmed up writers both provide some fun facts and anecdotes concerning the film in question. Apparently the film was released in the UK first (very unusual) and the town set was later featured in Back to the Future – check out the clock tower! Interestingly actor, Phil Harvey, who played Ben in the film, lived to 100 and was also in The Deadly Mantis, another classic cult film.

Audio commentary with Steve Jones and author/critic Kim Newman – The two commentators discuss the history of Universal International a little, mention a previous film with a similar premise, namely Neanderthal Man (1953), and explain that director Jack Arnold only really did the film as a favour to the producers.

Trailer (1.47 mins) – This emphasises that the monster likes hanging women up by their hair