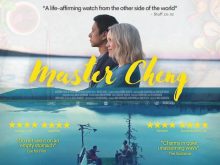 Mika Kaurismäki, who directed Master Cheng (a.k.a. Mestari Cheng), is the elder brother of Aki Kaurismäki. The Finnish pair kicked off both of their careers in 1981 with The Liar (a.k.a. Valehtelija), which was directed by Mika and written by and starred Aki. The success of this debut allowed them to start a production company together, Villealfa Filmproductions, which proved very successful, though by the 90s the brothers began to produce their own work separately under different companies.

With a near-slavish devotion to his singular style causing auteur theorists to drool into their notepads, Aki Kaurismäki has enjoyed more international success with critics and on the festival circuit than Mika. However, both brothers have enjoyed prolific and reasonably successful careers, with Mika’s work going down particularly well in his home country (though he’s made a number of international co-productions and has lived in Brazil since the early 90s). In fact, at one point, the brothers were responsible for one-fifth of the total output of the Finnish industry.

This statistic I came across online is likely not accurate anymore, but the Kaurismäki brothers continue to work hard as they reach their mid-to-late 60s. Master Cheng isn’t even Mika’s latest, he’s got two more recent credits to his name as director and another announced, but the film is due to finally be released in the UK in a limited theatrical run, courtesy of Parkland Entertainment.

Seeing as my wife is Finnish and we don’t watch nearly enough films together, I requested a screener for Master Cheng, knowing she’ll watch anything from her home country. My thoughts on the film follow.

Master Cheng opens with the arrival of Cheng (Pak Hon Chu) and his son Niu Niu (Lucas Hsuan) in the rural village of Pohjanjoki, 40km from the popular ski resort of Levi, in Finnish Lapland. Stepping off the coach that brought them there and into a local cafe owned by Sirkka (Anna-Maija Tuokko), Cheng asks all the locals inside whether they know ‘Fongtron’. Nobody has heard of this person, with the village made up predominantly of white, Finnish people who all know each other.

The stubborn Cheng won’t give up on finding Fongtron though, so hangs around. Sirkka takes pity on the man and his son, putting them up in a vacant house nearby.

When a group of Chinese tourists arrive in Sirkka’s cafe and seem unimpressed by her basic offerings of sausage (“Finnish vegetable”), mashed potato and shredded carrots, Cheng volunteers to cook for them. It turns out he’s a professional chef and his food is remarkably good.

With the tourists coming back a day or two later, doing great favours for Sirkka’s floundering business, she asks Cheng to stay and cook for her. He agrees, desperate to do something whilst he waits for news of Fongtron, and his food becomes hugely popular around town.

In fact, Cheng’s cooking is more than popular, it seems to have healing properties for the locals, most notably one of Sirkka’s regular customers, Romppainen (Aki and Mika regular, Kari Väänänen). Suffering from cancer, the elderly man finds a new lease of life from his new diet of Chinese food made by Cheng.

All seems peachy until we learn the truth about Fongtron, as well as the fate of Cheng’s wife. With the police also asking questions about Cheng’s place in the village (he has no work papers and his visa is running out), pressure is put on what he is to do next, particularly as Cheng and Sirkka have developed a relationship, beyond work.

Master Cheng is a rather conventional romantic drama whose story holds few surprises. The first half masks this, to some extent, through keeping the Fongtron mystery under wraps, but the second half is marred by a few too many cliches. Sentimentality builds in this portion of the film too, leading to a rather corny final act.

However, the film just about gets away with its well-worn story and sappy tendencies through a distinctly light touch. Characters and narrative threads are kept fairly minimal and the drama is toned down too, avoiding big melodramatic moments.

This lack of drama can make the film feel rather sedate and underwhelming perhaps (not helped by a slightly bloated running time), but there’s enough warmth and humour to keep you engaged. I particularly enjoyed the relationship between Romppainen and his friend Vilppula (Vesa-Matti Loiri, star of the long-running series of Uuno films). They provide comic relief without lurching into overly broad caricatures.

Also helping sell the generic subject matter is the setting. The film paints a wonderfully authentic picture of rural Finnish life (I’ve spent enough time there to recognise it). It’s not a ‘gritty’ portrayal in the usual, handheld camera, naturalistic lighting sense, but the locations and relationships/dynamics between the locals feel genuine. This might be an aspect better appreciated by Finns and those familiar with the country, but ‘outsiders’ are also well-catered to, with great use made of the beautiful Finnish landscape. Lapland, to those outside of Finland, is generally only thought of as the snow-covered home to Father Christmas, but it’s equally as picturesque in summer, as Master Cheng effectively proves.

Overall then, the film is a gentle, pleasant drama that never surprises, particularly in its rather schmaltzy second half, but is charming and sweet enough to keep you watching. Making great use of its Finnish summer setting, it’s a soothing, healing experience, like Cheng’s food, that should hit the spot if you’re in the mood for something light and wholesome.

Master Cheng is in UK cinemas from 11th March courtesy of Parkland Entertainment. It’s presented in Finnish with English subtitles, though much of the dialogue is in English (due to the language barrier between Cheng and Sirkka).