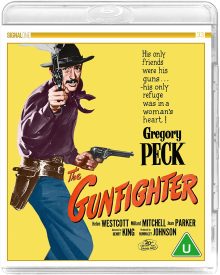 Henry King was not known as a classic western director but a number of his films, most notably The Gunfighter, were a big influence on later filmmakers working in the genre, such as Sam Peckinpah. King was never what you might call a household name either but he was an old pro by the time he made The Gunfighter, after acting and directing from way back in the silent era. This and another couple of his more famous films starred Gregory Peck, with the pair working together six times over the course of a decade, before King retired.

The Gunfighter came about when Twentieth Century Fox head Darryl F. Zanuck was looking for something interesting to work on coming into the 1950s and, reportedly, script reader Roger Corman found William Bowers and William Sellers’ script for him. André De Toth, who co-wrote the story, was originally going to direct it but Zanuck didn’t like his stylistic plans for the film, using the expensive Technicolour process but draining it of colour, to give it a muted look. So, instead, it was passed over to the reliable King. 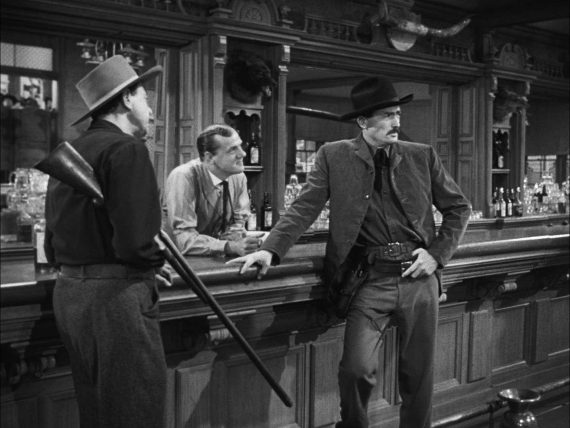 We’ll never know what De Toth’s take on the material would have ended up like, but King’s film has gone down in history as a classic of the western genre. It’s one of the big-name titles that’s eluded me for far too long though. This is partly because I’ve been waiting for Signal One to finally release it on Blu-ray. It was first announced by the label at the end of 2017, but rights issues for this and some other eagerly-awaited titles (including Nightmare Alley, which I’ll be reviewing in due course) kept pushing the 2018 release date back ever further.

Thank God Signal One stuck with it though, as The Gunfighter is finally seeing the light of day on dual format Blu-ray and DVD in the UK and I was lucky enough to get hold of a screener copy. My thoughts follow.

The Gunfighter’s protagonist, Jimmy Ringo (Peck), is loosely based on a real, if somewhat minor, western legend, Johnny Ringo. He was a member of the Clanton gang and went against Wyatt Earp at the infamous O.K. Corral. In the film, we meet him as he’s approaching middle age (35, I think he states at one point, though he acts older). He’s acquired a reputation as probably the fastest gun in the West but he’s grown weary of the attention it brings.

The most frustrating and life-threatening aspect of this ‘career’ is the fact that every fiery upstart (or “squirt” as Ringo likes to call them) is eager to test their skills against Ringo’s and become famous themselves. We see the result of this in the opening scene, when young Eddie (Richard Jaeckel) faces up to Ringo and pulls his gun on him, only to get swiftly dispatched in the duel. 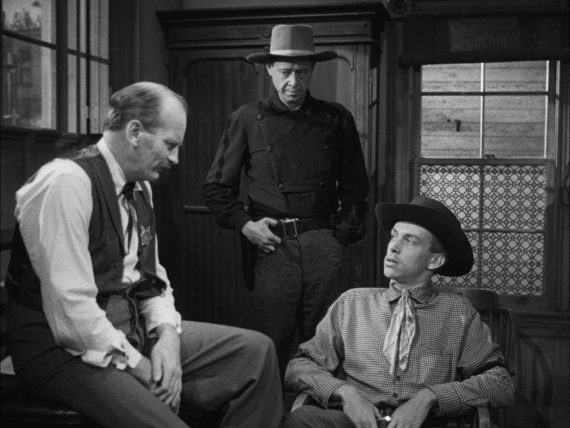 Ringo soon learns Eddie had three brothers who won’t be interested in the fact their younger sibling drew first and would be out for vengeance. Ringo manages to ambush them, taking their horses and leaving them stranded in the desert, but he knows they’ll catch up to him later if he hangs around.

However, Ringo is keen to reach his destination, the nearby town of Cayenne, and stay there as long as it takes. You see, his wife Peggy (Helen Westcott) lives there and he wants to see her after disappearing for eight years, leaving her with their unborn son. She’s changed her name though and rightfully doesn’t want to speak to the man that abandoned her for a life of murderous gunslinging. Nonetheless determined, Ringo roots himself in the local saloon (run by Karl Malden) whilst he waits for Mark (Millard Mitchell), a former criminal companion but now peace-keeping marshall, as well as another old friend, Molly (Jean Parker), to relay messages to Peggy.

Mark obliges but thinks Ringo is better off leaving as his presence is creating a buzz around town that’s bound to result in violence. Number one on the marshal’s list of characters to keep away from Ringo is Hunt Bromley (Skip Homeier), a young sharp-shooting wannabe who would jump at the chance to prove his worth against the man. Another problem comes from Jerry Marlowe (Cliff Clark), an older gentleman who believes Ringo was part of a gang that killed his son. Marlowe trains his rifle on the entrance to the saloon, waiting for Ringo to come out.

As the tension mounts around town, Ringo remains mostly in situ, determined to smooth things over with Peggy and start a new life with her and their son, who he’s yet to meet. 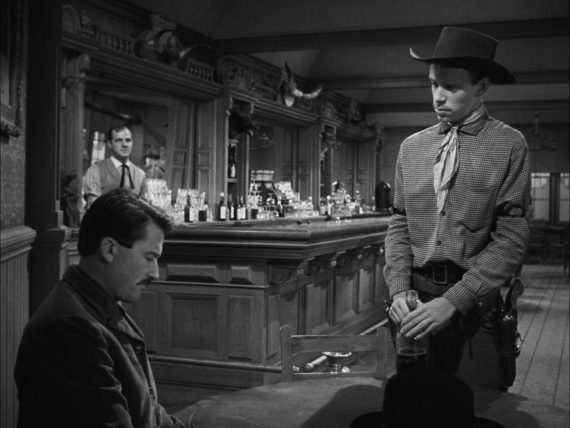 The Gunfighter came at a time when westerns were becoming darker and lines between the genre and film noir started to blur. A fine example of what would later be dubbed a “psychological western”, The Gunfighter eschews the usual grand vistas of the open west for a confined and intimate drama of a man trapped by his past.

It subverts the expectations of a sharpshooting, deadly gunslinger too. Ringo isn’t a cocky anti-hero, eager to show off his skills. Instead, he’s tired and fed up with his reputation and what that brings. Genre expectations you might glean from the title are also subverted as there’s very little actual gunslinging in the film, the act being relegated to just the opening scene and the climax, unless you count the vengeful, confused Marlowe who has his rifle aimed at Ringo through a good portion of the second act.

The Gunfighter initially caught John Wayne’s interest but various conflicts kept him from taking it on. It’s a good job too, as I can’t imagine him doing as well with such material as Peck does in the finished film. The respected actor perfectly captures the remorse, weariness and longing to start afresh required of the complicated central character. 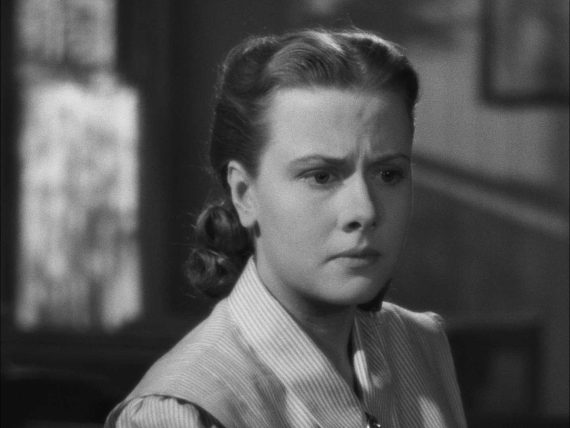 He’s backed up by a solid supporting cast too. There’s a great sense of community in the film, through the range of characters in Cayenne and the handful of locations within it. This all serves as a setting in which Ringo doesn’t fit. He stands out among the supposedly ‘upstanding citizens’ and their places of work. He longs to fit in, but it seems to be impossible as he’s treated very differently from the rest of the townsfolk.

This adds to the film’s unwavering sense of doom. Ringo seems fated to fall and King, editor Barbara McLean and writers William Bowers and William Sellers expertly ratchet up the tension throughout, making for a riveting watch, despite the lack of gun-toting action you might expect from the title.

The Gunfighter fully lives up to its great reputation. Tautly constructed, brilliantly performed and psychologically and thematically interesting, it’s a masterful entry into the western genre. 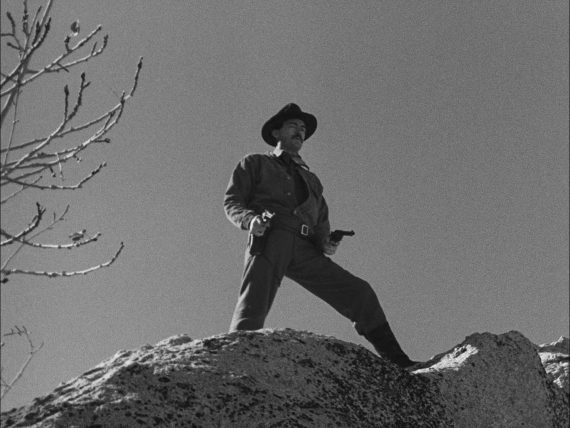 The Gunfighter is out now on Dual Format Blu-ray and DVD, released by Signal One Entertainment. Order it directly from the company here. I watched a Blu-ray screener and the picture quality was excellent. There was a fractional amount of digital grain in literally one or two moments but, otherwise, the image is clean and pretty sharp. Grain is heavy but, for the most part it looks fairly natural in movement. Audio is solid too. I don’t have the Criterion release to compare against that disc I’m afraid, but I’ve used screengrabs in my review to give you an idea of what it looks like.

It’s a disappointingly sparse package in terms of extras but Alex Cox’s introduction is affectionate and interesting, if a little brief at only 9 and a half mins. He discusses the importance of King and the film, discussing some writing on the genre and where The Gunfighter sits inside it.

So, the relative lack of extras is a shame but with the quality of the film, a great transfer and Cox’s introduction it’s still an easy recommendation.