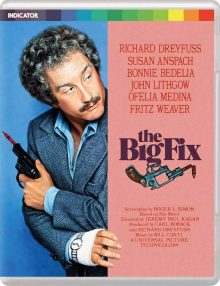 Forget the Jaws section of the Universal Studios tour – Richard Dreyfuss’s entire career would make an amazing roller coaster. He made a steady start with a decade of gradually improving TV roles and minor movie parts, before rocketing upward with a series of starring roles, including several of the biggest hits of the era. Between 1973 and 1977 he was in American Graffiti, Jaws, Close Encounters of the Third Kind, and won the Best Actor Oscar for The Goodbye Girl. At the time, he was the youngest actor to win the award, and it appeared to confirm his status as one of the leading stars of his generation. But then came the first plummet. From 1978 to 1986 (when he appeared in the appropriately titled Down and Out in Beverly Hills), Dreyfuss made more headlines than films. As he reportedly struggled with cocaine addiction, the hits vanished.

Released in October 1978, The Big Fix was a box office failure that marked the beginning of Dreyfuss’s descent. It was his first film as a producer, and was clearly designed as a vehicle for his talents. He plays Moses Wine, an ex-campus radical turned private detective, divorced with two kids and struggling to make his alimony payments. Wine is a quirky character who still holds many of his 1960s values: he drives a battered VW Beetle, takes recreational drugs and practices detection with solo games of Cluedo. Into his haphazard life strides Lila (Susan Anspach), a girlfriend he hasn’t seen since college. She wants his help in tracking down whoever is responsible for printing flyers that falsely link a progressive presidential candidate with a still-at-large leader of the 1960s counterculture (F. Murray Abraham, styled after Abbie Hoffman).

It’s a promising set-up, contrasting the realities of late ‘70s America against the thwarted ideals of the previous decade. In different ways, however, this promise becomes lost in the details of Wine’s investigation. Having reluctantly accepted the assignment from Lila’s boss (an obviously suspicious John Lithgow in only his second role), Wine begins making enquiries. Detective craft can be fascinating on film, but here each new encounter is treated primarily as a showcase for Dreyfuss’s performing skills. Until the 40-minute mark, the film meanders. The stakes do increase – suddenly and unexpectedly – but thereafter matters become bogged down in an unnecessarily complicated and unlikely conspiracy.

Throughout, Dreyfuss is a lively, unpredictable presence, and away from the case the film can be a lot of fun. From the outset, Wine has his arm in a cast and gives several explanations for how he broke it. Bonnie Bedelia and Ron Rifkin play Wine’s ex-wife and her new partner, both now self-improvement enthusiasts. Far from being a lone detective, Wine is often joined by his children and a politically engaged aunt he ropes in as babysitter (a great performance from Rita Karin). In many ways, the position of The Big Fix in Dreyfuss’s career is unfortunate. It certainly does nothing sufficiently wrong to explain his precipitous first decline (other, less extreme slumps would follow in the early and late 1990s) and it contains plenty of evidence why he has been repeatedly able to regain the industry’s favour. It’s an unusual if ultimately unsuccessful entry in the 1970s detective cycle, a worthwhile watch for Dreyfuss fans and those with an interest in the period. 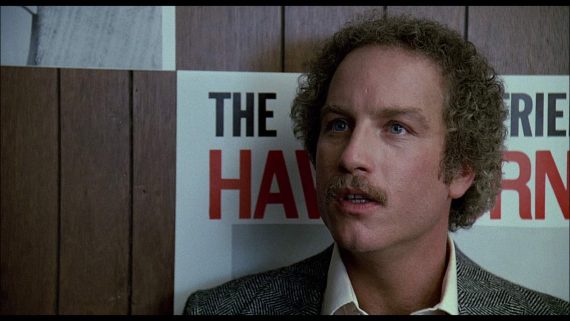 Indicator’s new release of The Big Fix offers an excellent though not quite pristine viewing experience. There is some evidence of very minor print damage, but nothing that distracts from the onscreen action. One of the appeals of the film is its use of now-vanished LA locations, and these are clear and bright.

Three major new extras are present: a commentary from Little White Lies Editor David Jenkins, and video interviews with director Jeremy Paul Kagan and screenwriter Roger L Simon. The commentary is a disappointment. Jenkins seems to have no particular knowledge of or liking for the film, or even for 1970s cinema in general (he describes Kevin Bacon in Footloose as the quintessential cinematic rebel). Instead, he describes what he sees on screen, or relays Wikipedia level information. The interviews are much better. Kagan begins and ends his interview speaking through a puppet version of himself. In between, he engagingly discusses where The Big Fix fits into his career, and how Hollywood has changed since its production. The story behind Moses Wine’s broken arm is worth hearing. The Simon interview is shorter, but again very much worth a watch.

Also included are the original theatrical trailer, a TV spot, and a promotional gallery. There is an initial limited edition of 3,000 copies that come with a new essay by Will Harris, archival articles and interviews, an overview of contemporary critical responses, and film credits.