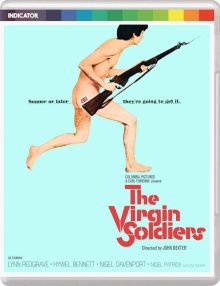 The Virgin Soldiers is a 1969 wartime comedy-drama that takes place during the Malayan Emergency and follows a group of randy new recruits that are desperate to enjoy the pleasures of the opposite sex. However, the recruits are stuck on the base where there is an unfortunate absence of women.

Our hero is Private Brigg (Hywel Bennett), a virgin who is afraid of the diseases that the local prostitutes may have, so is reluctant to lose it the same way his mates are. He soon becomes attracted to Phillipa Raskin (Lynn Redgrave), the only young and attractive female on base, but she also happens to be the daughter of the Regimental Sergeant Major (Nigel Patrick). Although attracted to each other, a romantic encounter at a formal dance doesn’t go well and Phillipa ends up losing her virginity to the suave Sergeant Driscoll (Nigel Davenport). Unaware of this, Brigg finally plucks up the courage to visit local prostitute Juicy Lucy (Tsai Chin) who becomes infatuated with him. Now happy he is no longer a virgin, he can’t stop thinking of Phillipa and a love triangle develops on base – but before long, all of this is put in perspective when the local political situation puts them all in danger.

The Virgin Soldiers is an adaptation of a semi-autobiographical novel written by Leslie Thomas. It is an odd marriage of sex comedy and more serious depictions of the brutalities of war that, nonetheless, works quite well. There are plenty laughs as we experience the soldiers hi-jinks, but in a shocking final act we are reminded that they are merely young boys largely out of their depth.

The script, written by John Hopkins, John McGrath and Ian La Frenais, is very witty with the dialogue especially being believable and natural. There are plenty of interesting characters, from the openly gay couple, a corporal who would rather be reading books than going into combat and a sergeant who boasts about his military history but ultimately turns out to be a coward. Hywel Bennett is very convincing as the nervous Private Brigg and the always dependable Lynn Redgrave is excellent as his slightly oddball love interest. As well as memorable supporting roles from Nigel Davenport and Nigel Patrick, the rest of the cast are made up of lots of familiar faces – there’s Geoffrey Hughes, who would go on to play Eddie Yates in Coronation Street and Onslow in Keeping Up Appearances, Christopher Timothy who would later find fame as James Herriott in All Creatures Great and Small, dancer Wayne Sleep, and most surprisingly of all, a small bit part for a very young David Bowie.

Impressively for a modestly budgeted British production, the film is largely shot on location in Singapore and Malaysia – you can see the sweaty cast were struggling with the humidity! The cinematography is stunningly realised by Kenneth Higgins, really capturing the oppressiveness of the jungle locale. The action sequences are also well-coreographed, especially a train derailment which is shot entirely from within the carriages.

Directed by John Dexter, The Virgin Soldiers is great entertainment. It is well paced, with a great cast playing a wonderful assortment of characters. The mix of styles is handled well, thankfully Dexter keeps the sex element classy and avoiding falling into sleazy exploitation, keeping nudity to a minimum – something that 1977’s woeful sequel, Stand Up Virgin Soldiers, fails at. Afterall, that one stars Robin Askwith…

The Virgin Soldiers is released on Blu-ray by Indicator and includes as extras:

• Image Gallery – a large collection of original promotional materials for The Virgin Soldiers.

• 16mm Location Footage – presented here is silent footage that was shot during the scouting session in Singapore and Malaysia, where hey parts of The Virgin Soldiers were filmed.

• Some Confidence – writer Ian La Frenais recalls his involvement with The Virgin Soldiers and discusses his interactions with director John Dexter. There are also interesting comments about his meetings with Leslie Thomas and observations about the casting choices that were made.

• The Virgin Actors – actors Roy Holder and Christopher Timothy discuss their contributions to The Virgin Soldiers, John Dexter’s directing methods, and the evolution of their careers.