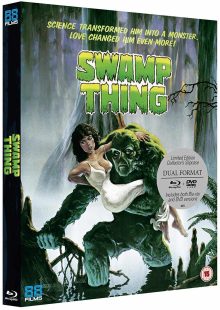 There once was a time when films based on comic books were few and far between and to be fair, most of them weren’t particularly good adaptations. Kids today don’t know they were born, what with at least 3 Marvel films and a couple of DC ones released every year, and not to mention the films and numerous TV series based on independent comics. When I was a kid, we basically had Superman and Superman II, and we loved them. Both films were huge successes worldwide, so it was only a matter of time before another DC character was brought to the screen. Somewhat inexplicably, that film was a low budget adaptation of one of the comic company’s lesser known characters, Swamp Thing. Created by Len Wein and Bernie Wrightson in 1971, he gained his own comic in 1972 but it sold pretty poorly and was cancelled in 1976. In fact, it wasn’t until the great Alan Moore came to DC and started writing his fantastic run of issues in the mid-80s that the character became popular, so Swamp Thing seemed like an odd choice to bring to cinema screens. The man chosen to write and direct was Wes Craven, at the time known for horror films Last House on The Left and The Hills Have Eyes, who the studio hoped would bring some horror sensibility to the film, but due to budget constraints ending up making a campy monster flick.

Swamp Thing follows the tragic tale of Alec Holland (Ray Wise), a brilliant scientist who, along with his equally brilliant sister Linda, is developing a formula combining the DNA of plants with that of an animal. Early on when Linda scatters several drops onto the floorboards of the experimental greenhouse the scientists are using, the boards develop plant shoots within hours, which then evolve into a full-grown orchid tree within a day. This proves that their experiments to produce plants with animal instincts to survive, thus providing food sources capable of thriving in the most hostile terrain, have been a success.

New to the science facility is agent Alice Cable (Adrienne Barbeau) who is not delighted with being assigned to work in the deep swamp. After witnessing the success of the formula though, she quickly realizes how important the work is. Before long, evil mastermind Anton Arcane (Louis Jordan) invades the lab with his mercenaries and kills Linda. In a struggle over the formula, Alec Holland is set afire and plunges into the swamp, whilst Cable manages to escape. Holland doesn’t die as the formula merges the swamp with his human DNA and transforms him into the half man half plant Swamp Thing. 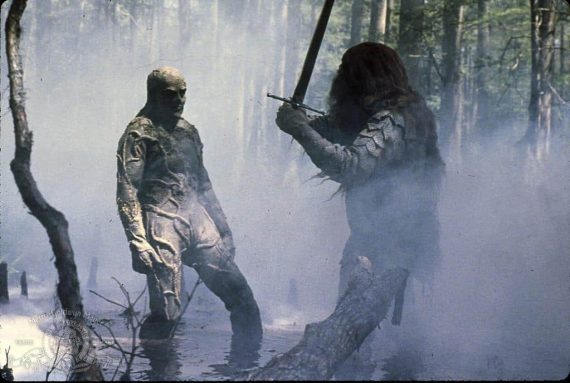 Swamp Thing’s greatest strength is the wonderful cast that Craven has assembled. Ray Wise is excellent as Alec Holland and even though he isn’t in the movie for more than 10 minutes, he is a very likable and charismatic presence on screen. B-movie queen Adrienne Barbeau gives another strong performance as Alice Cable, bringing a toughness to the classic dame in trouble stereotype. Chewing up the scenery as the leader of the mercenaries, Ferret, is David Hess (most famous as the psychotic Krug in Craven’s first film, Last House on The Left), playing a thoroughly despicable example of humanity. However, it is Louis Jourdan who steals the show as Anton Arcane. Jourdan was a veteran of Hollywood mostly known for his romantic roles such as in Gigi (1958), but here he is clearly enjoying himself playing the villain and he would go on to play a Bond supervillain in Octopussy the following year.

Unfortunately, this great cast is let down by the cheapness of the production. Apparently, Craven ran into money trouble early on, which meant he had to greatly reduce the number of takes he could shoot, and entire scenes were even scrapped. The action scenes are pretty poorly choreographed and filmed with many resembling those found in American TV shows of the time such as The A-Team and MacGyver. The special effects budget was obviously the first to go as Swamp Thing himself is so obviously a man in a rubber suit and at no point do you believe that he is made of vegetation. The final battle between our hero and a sword wielding werewolf (another awful suit!) is so cringeworthy it just tops off the entire bargain basement feel of the film.

88 Films have done a fine job of remastering the film for Blu-ray release. The picture shows no sign of film stock damage, except for the very occasional white specs. The colour is reasonably stable and very natural looking. The original DTS-HD Mono track is beautifully clear and balanced well. Dialogue is easy to follow and Harry Manfredini’s score sits well in the mix. 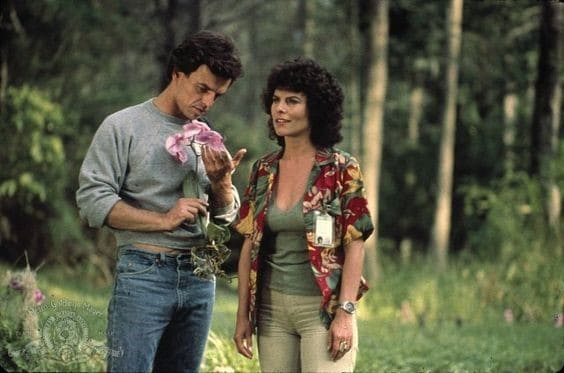 Included on the disc are a nice selection of extras including an audio commentary from Wes Craven moderated by Sean Clark, who manages to draw out some revealing details about the film’s creation and inception from the director. From Krug to Comics is an informative interview with film critic Kim Newman about Wes Craven and David Hess’ history in genre films. Rounding things out are an interview with Production Designer Robb Wilson King and the original theatrical trailer. The package itself is lovingly presented with the original artwork reproduced and includes a nice poster and a booklet packed full of high-quality photos from the film.

At the end of the day Swamp Thing isn’t a very good film, but it is a lot of fun. It has a lot of flaws, and its pacing and poor special effects will put off a lot of modern-day fans of superhero films. It provides an interesting look into the evolution of comic book films and the filmmaking of Craven himself.

Swamp Thing is released on dual format Blu-ray/DVD by 88 Films.