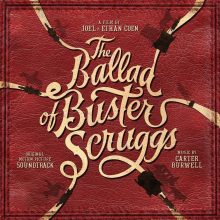 The Coen Brothers have had a long working relationship with Carter Burwell all the way back to their debut, Blood Simple. The work Burwell produces for them is almost always great too, so I don’t blame the Coens for very rarely letting anyone else give it a go. The Ballad of Buster Scruggs saw the brothers venture back into the western genre after True Grit and once again Burwell was there with them to provide the score, of which I received a CD to review. For once I made sure to watch the film beforehand, hence the delayed write-up. I loved the film (it made my top ten of the year), so did the soundtrack match up to it?

Things get off to a gentle start with ‘The Book’, which slowly unfolds from a simple guitar line to a lush orchestral bloom. This and others mix a traditional western style sound with Burwell’s typical brooding and subtly grand feel heard in soundtracks like those for Miller’s Crossing and Fargo. As with a lot of Burwell’s work with the Coens, there’s a dark edge to most of the tracks, but there’s also a sweetness and warmth coming out on numerous occasions.

‘Cool Water’ is the first of the Tim Blake Nelson tracks, from the ‘Ballad of Buster Scruggs’ segment of the anthology film. It’s a lightly comic song, like Nelson’s other contributions here. It’s got a catchy tune and a quirky backing with some warped whistles (or possibly saw?) providing a counterpoint to the melody. The other Nelson songs are spread throughout the album, which otherwise plays out the tracks in chronological order. ‘When a Cowboy Trades His Spurs For Wings’ (with Willie Watson joining Nelson) is a sweet sentimental number with a hint of tongue-in-cheek in its lyrics. Like most of the songs on the album, it verges on parody but is done with enough respect for the genre/style and subtly clever writing that it’s actually rather effective as a ballad in its own right. ‘Little Joe the Wrangler (Surly Joe)’ is a fun and catchy song with plenty of dark humour (“Where the heck his face has got to, we don’t know”). It’s one of the most enjoyable moments of the film and works well in audio form too.

There are a few short little asides on the soundtrack that all have their charm, like the fun honky-tonk piano of ‘Randall Collins’. ‘Carefree Drifter’ (performed by David Rawlings & Gillian Welch) is another very short harmonica-led cue that may not last long but plays its part.

‘Near Algodones’ is a particularly dark, electric slide guitar number that shivers with tension, bringing in timpani towards the end to accentuate this.

‘The Wingless Thrush’ is a particularly poignant number to match the ‘Meal Ticket’ story it goes along with. It’s one of the lower key tracks which maintains a quiet sense of sadness, though it has a slight build towards the end similar to a lot of the tracks here.

‘Our Revels’ follows with another gentle track. It starts off a little too softly to make much of an impact, but again has that dark, brooding build towards the end. It’s still probably one of the weakest tracks though.

‘Canyon Awake’, ‘How Deep’ and others have a romantic quality to them. Particularly the tracks from the ‘All Gold Canyon’ story, which sees Tom Waits’ character work hard and methodically to find a pocket of gold. ‘Hello Mr Pocket’ has a nice build of pace as Waits’ character draws closer to finding his fortune. Then it takes a dark turn towards the end to match what happens.

Most of the tracks from ‘The Gal Who Got Rattled’, such as ‘Goodbye Canyon’ and ‘Unmarked Grave’ also have a lush romantic quality to them, bringing to mind the lure of the wide expansive landscape. ‘The Oregon Trail’ also perfectly encapsulates the feel of hitting the trail and heading out to pastures new. There are still dark moments here though, such as in ‘Certainty’ and the last two tracks of the section, ‘Seeking Alice’ and the melancholic ‘The Gal Who Got Rattled’, although this builds to a surprisingly triumphant finale, given what happens.

‘The Unfortunate Lad’ is a sad little folk song about death, sung by the great Brendan Gleeson, who never fails to surprise me. The subject matter fits the section, ‘The Mortal Remains’, and the film in general which seems fixated on death. Given the dialogue-heavy nature of that section, it’s no surprise it has the least music, with only that song and the section’s title track appearing here. The latter is a particularly gloomy piece with a sense of doom pervading as a bell is regularly struck in the background and mournful strings take over as it goes on.

The final track, ‘The End of Buster Scruggs’, is particularly enjoyable, bringing back themes from earlier in a fairly upbeat, lilting medley.

Most of the cues in the soundtrack are quite short, with only the final track passing the 3-minute mark. As such, there aren’t many themes that stick with you, other than a couple of recurring motifs. The tracks are all beautifully composed and arranged though and the soundtrack always feels unified with Burwell’s sound remaining cohesive throughout.

Overall, the music has a lot of character and charm, but with a distinctly dark and often melancholic edge, like the film. It’s a grower of an album, which I thought was nice at first listen, but became a favourite after a few more.

The Ballad of Buster Scruggs (Original Motion Picture Soundtrack) is out now on CD, digital download and all major music streaming services.