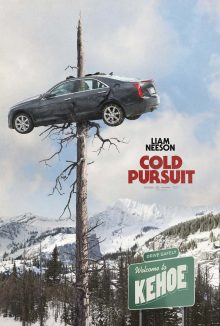 After three ‘Taken’ films spawning a torrent of revenge thrillers that have seen him take on pretty much everyone from pretty much every country (that list includes wolves too), ’Liam-Neeson-seeking-revenge is almost a genre of its own at this point. But with ‘Cold Pursuit’, director Hans Petter Moland hopes to break the mould with an English-language remake of his own film, ‘In Order Of Disappearance’. The result? A surprisingly entertaining revenge thriller that feels fresh, but ultimately doesn’t quite do enough to thaw Neeson’s streak of sub-par revenge ventures.

I’ll be the first to admit that Liam Neeson’s recent forays in the action genre have been of mixed success, and when originally hearing about Moland’s snowy set thriller I’d be lying if I said I hadn’t met the concept with a groan or two. Neeson seeking revenge for the death of a family member might as well be a punchline at this point, and it can take a while to shake that feeling, but what is most surprising here is how quickly Moland is able to flip the audience’s expectations and embrace that cliché with open arms. We’ve seen this story before, but not quite like this. The initial set-up is typically straightforward, but it quickly becomes apparent that Moland knows exactly what he’s doing here – and the casting of Neeson suddenly makes a lot of sense, in a film that clearly revels in the ludicrousness that so often befalls the genre. To see Neeson deliver lines in his typically stoic way whilst the world and characters around him are begging to be laughed at, is perhaps Cold Pursuit’s biggest draw. 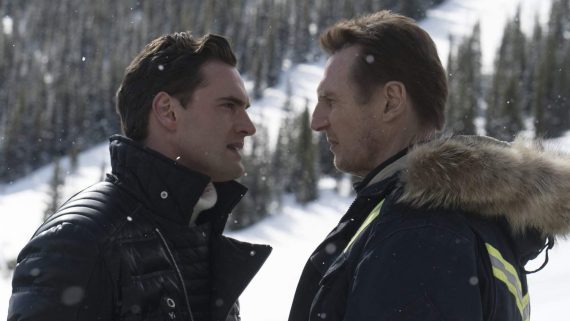 It’s this playfulness that makes what could have been another bog-standard dark revenge flick feel a little more worthwhile, and as the story peels away its many layers it’s hard not to get sucked up in Moland’s efforts. Characters’ deaths (and there are a lot of them in here) are announced sporadically by Tarantino-esque title cards, which work well to break up the plot and deliver consistent laughs throughout, and the plot takes so many twists and turns it could almost double as a Coen Brothers B-side (not helped by its snowy setting…) with new characters and relationships seemingly plucked out of thin air. It would be wrong not to mention Tom Bateman’s scene-stealing villain, nicknamed The Viking, who seems to be having more fun than anyone in a comically over the top turn that almost always delivers on the laugh-front. All this to say Cold Pursuit is pulpy, ludicrous and wickedly dark when it needs to be, but somehow it never really feels like it finds its stride. 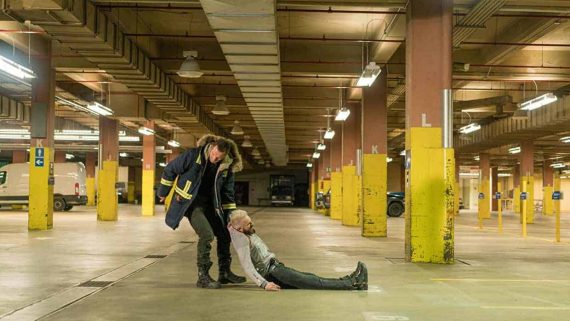 For all its merits, the eccentricity of its characters and frivolity with which it tackles the world they find themselves in does start to feel somewhat repetitive, and a lack of anything remotely resembling a story or arc for co-stars Laura Dern and Emmy Rossum feels especially noticeable and borderline criminal. The introduction of new characters and removal of others can keep things unpredictable and is often played for laughs, but it can come at the expense of caring about much of what we’re seeing on screen. The final act might be the perfect example of this – a gunfight that comes perhaps a little too late with no real sense of consequence or tension, following on from a few too many surreal plotlines that don’t quite feel funny enough to justify. Which is a thought that plagues Cold Pursuit, even through its most entertaining moments: what exactly are we here for other than perhaps to subvert the expectations the film has only really created for itself. I’m just not too sure who this film is really for – as a revenge-thriller it plays a little too silly to take seriously enough, and as a balls-to-the-wall farce there’s just a little too much of the thriller stuff to really take flight. Under a clearer vision, and dare I say a better director, there might be a place for it in the middle, but as it stands there just isn’t quite enough of a commitment to its characters and story here for it to feel like there’s much worth coming back to. Ultimately whilst Moland’s dark sense of humour and commitment to having fun with the genre gives this remake enough of an edge to stand out from the crowd, at nearly two hours of runtime it doesn’t quite have enough tread in in its tyres to keep it ploughing through the snow.

Cold Pursuit is out now in UK cinemas.