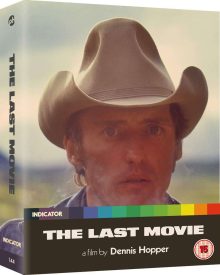 Dennis Hopper’s 1969 film Easy Rider was a huge surprise success and the old guard at Hollywood, who were struggling at the time due to the rise of television and a stagnant studio system, wanted to try and recapture that lightning in a bottle. This led to a new sort of ‘golden age’ in the 70s, where directors were given full reign to explore interesting new territories with the support of big studios. The period and its eventual downfall is enjoyably explored in Peter Biskind’s book ‘Easy Riders and Raging Bulls’. Universal was one studio who soon jumped on the bandwagon following Easy Rider, offering unprecedented $1 million budgets and final cut to 5 young, exciting new directors to each make a movie. These films were The Hired Hand, Two-Lane Blacktop, Taking Off, Diary of a Mad Housewife and Hopper’s follow up to Easy Rider, The Last Movie. None of them became a massive hit like Universal hoped, although some received critical acclaim and are now considered cult classics.

The Last Movie’s failure was perhaps the biggest shock though. With Easy Rider’s Hopper behind it, the film had a lot of press during production and actually won the Critics Prize at the Venice Film Festival after an early screening. However, audiences and critics back in the US weren’t impressed by this abstract, confusing film and it disappeared from theatres after a couple of weeks. It was long thought of as a turkey, halting Hopper’s directorial career for 9 years, and has been largely unavailable for many years. However, the film does have its fans. Alex Cox, for instance, has been vocal in his appreciation of it (and provides a documentary on the film here, as well as contributing to the included book). This slowly growing interest in the film prompted it to get restored in 4K last year and it is now being released in a handsome and extras-stacked Blu-Ray package by Powerhouse as part of their Indicator label. I took a look to see if it was worth resurrecting. 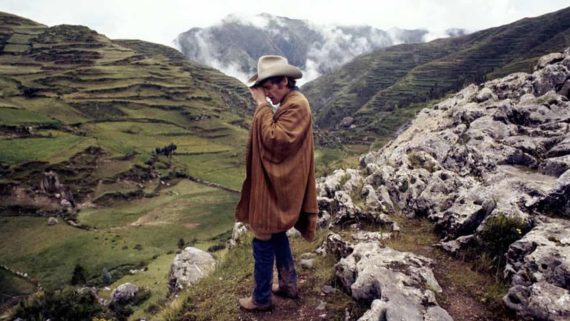 The Last Movie sees Hopper himself play Kansas, a wrangler working with a film crew shooting a western in a village in Peru. He becomes disillusioned during the process and decides to stay on in the village after the shoot ends, living with a girl (Toni Basil) he fell for. At first, he loves this new, unspoiled existence, but the presence of Hollywood has affected the village, with his girlfriend desiring all the mod-cons and the locals getting whipped up into a frenzy as they recreate the scenes shot by the crew, but this time for real. Kansas gets wrapped up in this, as well as in an ill-judged attempt at gold-mining with a friend. It all gets too much, ending in a surreal finale where you’re not quite sure what is real and what is imagined.

Due to its reputation, I was expecting the worst when I sat down to watch The Last Movie. Indeed, in the first 15 or 20 minutes, my fears seemed justified as you’re thrown into a confusing mess of intercut sequences that share little connection. Thankfully the editing settles down after a short while and the film makes reasonable sense for a good portion of its running time. The finale brings back the frantic, disorientating style of the start, but within the context of what’s happening it seems more justified, although there are some odd choices of material in there, particularly a final coda with Kansas and his gold-digging compatriot that doesn’t quite fit (although its discussion of how a movie was his friend’s sole research into the venture fits the message of the film).

Supposedly the original cut of The Last Movie was much more straight forward in terms of storytelling, but during the long editing process, a lot of Hopper’s drugged up friends would watch the film and suggest wild changes, including Alejandro Jodorowsky who reportedly was one of the main proponents in Hopper’s hacking up and reordering of the film’s structure. When done in the right way and for the right reasons, jumbling up a timeline can be an effective technique, but here it feels like a mess, particularly in the opening portions of the film. Some plot strands, namely the gold-digging one, could probably have been lost too, to keep things leaner and more focussed. 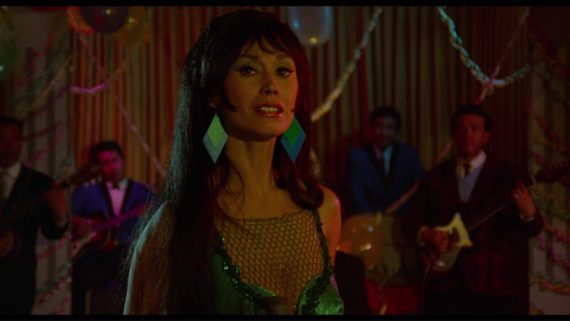 As confusing and messy as some of the film can be, Hopper’s messages are still quite clear and make for an interesting statement on the power and dangers of cinema or perhaps the influence of America, symbolised by Hollywood. Having the villagers make their own film with pretend cameras and taking it as reality is maybe a little ridiculous in where it ends up, undermining the intelligence of rural Peruvians. However, taking this as an exaggeration or metaphor for Hollywood’s/America’s influence on the rest of the world it holds up for the most part, particularly in the scenes where a slimy group of Americans go on a sordid night out, exploiting the local women. The Last Movie also works as a look at how films can shape and warp our reality, particularly as we watch them. When we’re fully engaged in a film we shut off the world and the universe on screen becomes our own for its running time. Perhaps Hopper’s examination of what happens when the film ends gives cinema too much credit, but films have been known to effect public opinion and reshape history in some instances.

Like Easy Rider and many of the great films of the 70s, the freewheeling and natural style is well evoked and it often looks gorgeous. The camera drifts effortlessly in some long tracking shots through the chaos as Kansas becomes disillusioned by his way of life. The strange world of filmmaking is brilliantly captured in general. With real-life director Sam Fuller playing the on-screen director of the film within a film we see shot in the first act, it really feels like we’re on a film set among the cast, crew and bewildered locals.

The sound design is very good too, doing a fine job of emphasising the bewildering and crowded atmosphere evoked on screen. As with Easy Rider, there are plenty of great contemporary songs on the soundtrack, often played here by the artists on screen, such as Kris Kristofferson who crops up a few times in the first third.

So, although The Last Movie occasionally feels like the rambling, overambitious mess I expected, it also has quite a lot going for it. As a post-modern look at the construction and effect of cinema, as well as a political statement on the influence of American values on the rest of the world, it’s not bad at all. It’s just a shame Hopper kept tinkering at the edit, turning a potentially excellent film into a forgotten curiosity. It’s still worth watching though and this finely packaged Blu-Ray release is the best way to do so, as I will explain below. 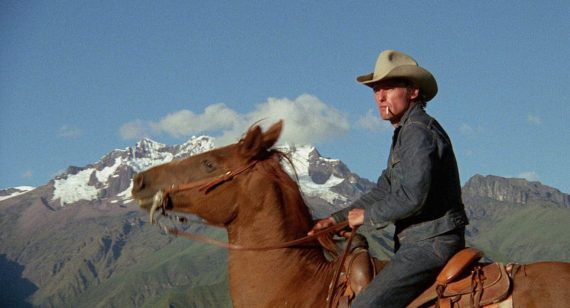 The Last Movie is out on 21st January by Powerhouse Films on Blu-Ray as part of their Indicator label in the UK. The picture and audio quality are both superb.
There are plenty of special features included:
- 4K restoration
– Original mono audio
– The Guardian Interview with Dennis Hopper (1990): archival audio recording of the filmmaker and actor in conversation with Derek Malcolm at London s National Film Theatre
– Some Kind of Genius (1986): Paul Joyce’s documentary portrait of Dennis Hopper
– Scene Missing (2012): a documentary directed by Alex Cox on the making of The Last Movie
– Postcards from Peru (2018): new interviews with members of the original Peruvian cast and crew
– The Dick Cavett Show (1971): a 1971 TV interview with Hopper
– Dennis Hopper Video Introduction (2007)
– Trailers: the original 1971 trailer and the 2018 reissue trailer
– Image gallery: on-set and promotional photography
– New and improved English subtitles for the deaf and hard-of-hearing
– Limited edition exclusive 80-page book containing extensively researched new writing by filmmaker Alex Cox, rare archival photography, and full film credits
– Limited edition exclusive double-sided poster
– UK premiere on Blu-ray
– Limited Edition of 3,000 copies

I won’t lie, due to the film’s troubled history I was looking forward to watching the special features for this more than the film itself and they don’t disappoint. The Guardian interview is particularly good, offering an honest and enjoyable account of Hopper’s life and career. Some Kind of Genius covers much of the same ground (Hopper obviously has stock stories he likes to bring out), but still has enough different material to recommend watching too. Scene Missing is interesting in the range of people interviewed about the production. With Hopper himself dead at the time of production, he’s sadly missing, but all sorts of contributors who had varying involvement in The Last Movie are interviewed and they all offer unvarnished accounts of their experiences and thoughts on the finished film. It’s a refreshingly unbiased look, despite the love director Cox has of The Last Movie.

Postcards From Peru lets the locals describe how the shoot affected them and it shows how surprisingly realistic some of the reactions of the on-screen villagers actually were. It’s a fascinating piece, offering a unique perspective on a film’s production. The Dick Caveat Show is only short, but fun to see.

Rounding everything off is the book included in the package and it’s superb. Indicator always provide decent material in their booklets, but this is really a treat running at 80 pages. It’s largely just one long essay by Cox, rather than writing from a collection of sources, but he’s certainly done his research and provides an incredibly thorough account of the film’s inception, production and reception as well as his thoughts and interpretations of it.

So all in all, a fine package. The film may not be perfect, but Indicator’s Blu-Ray isn’t far off.