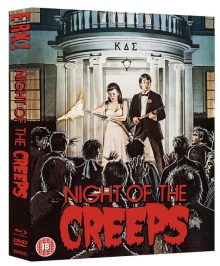 Compared to many writers and directors, Fred Dekker had a very lucky and relatively swift start to his career. At only 27 years old he had his treatment for House turned into a commercially (and critically to an extent) successful film. That same year (1986) he managed to get a full script of his produced too and he was allowed to take the director’s chair, despite not having been to film school like most of his contemporaries. This film was Night of the Creeps, which didn’t make a dent in the box-office at the time, but has since gone on to gain a cult following. Dekker followed this up with The Monster Squad, which again didn’t find an audience until later. Somebody must have liked these films though as he was given the job of co-writing and directing the third Robocop film a couple of years later. However, this was a complete disaster for all involved, not helped by its production company, Orion Pictures, going bankrupt, leading to a delayed release.

Dekker has taken the blame for much of the Robocop 3’s failure and hasn’t directed a film since. He’s made some uncredited script changes to films like Titan A.E. and Lethal Weapon 4, and recently co-wrote The Predator with his old friend Shane Black, but largely he became a bit of an also-ran after Robocop 3. This is a great shame as Night of the Creeps and The Monster Squad are both deserving of their cult status. Unfortunately, neither film has had a DVD or Blu-Ray release in the UK, so they’ve only been available on import, VHS or poor streaming versions. I was lucky enough to watch Night of the Creeps at a film festival a decade or so ago and have been desperate to own it ever since. Coming to my rescue, thankfully, were my old friends at Eureka, who are releasing the director’s cut of the film in a special-features packed Blu-Ray set. Of course I jumped at the chance of reviewing it and my thoughts are below.

Night of the Creeps plays with your expectations to begin with, opening with a brief segment on a spacecraft where one strange-looking alien, who’s being chased by others, fires an ‘experiment’ out of an airlock. We then cut to America in 1959 (shot in glorious black and white) where the canister crash lands. College student Johnny (Ken Heron) finds it first and a slug-like creature jumps into his mouth. At the same time, his girlfriend Pam (Alice Cadogan), who was waiting in the car whilst he investigated, is butchered by an escaped mental patient wielding an axe. 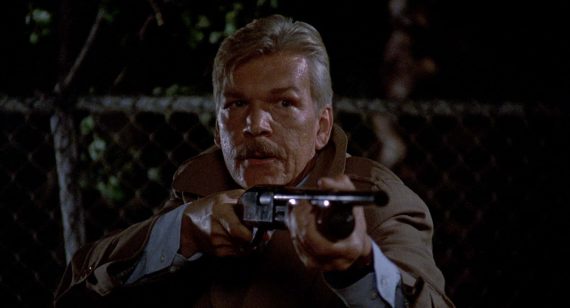 We then jump forward to 1986 (and turn back into colour) where lovelorn geek Chris Romero (Jason Lively) and his disabled friend J.C. (Steve Marshall) try to impress the gorgeous Cynthia Cronenberg (Jill Whitlow) by joining a fraternity. The head of the ‘brothers’, Brad (Allan Kayser), who also happens to be Cynthia’s boyfriend, says he’ll only admit them if they dump a dead body at the steps of a competing fraternity. So, the two friends reluctantly head over to the medical building where they stumble upon a containment chamber where the body of Johnny is kept cryogenically frozen. They foolishly release the body from the chamber and, much to their surprise, Johnny comes alive, sending them fleeing the scene. Johnny has a surprise though. After he lumbers back towards the fraternity house where Pam used to live, his head explodes and dozens of the little slug creatures pop-out, slithering across campus to turn more victims into mindless zombies.

Assigned to the case is Ray Cameron (Tom Atkins), a grizzled detective who’s nearing the end of his tether, still plagued by memories of 1959 when he was working the beat at the time of his ex-girlfriend Pam’s murder. Sensing a link between the latest deaths and what happened back then, he sees a chance for redemption and needs the help of Chris and J.C, who keep stumbling into trouble.

I was a little worried Night of the Creeps wouldn’t live up to my memory of the screening I caught back in 2009 at the Dead by Dawn film festival. If I remember correctly, Dekker was in attendance and the packed crowd responded well to the film. That kind of experience, particularly when you’re bleary-eyed after chain-watching horror films all weekend, can warp your perception of a film, so I thought perhaps it wouldn’t be as good as I remembered. Luckily, it was.

Possibly the biggest triumph of Night of the Creeps is its script. Loaded with sharp dialogue and references to horror and sci-fi films of the past (check out the surnames of the characters), it was a post-modern horror-comedy well before Scream made them popular. It’s endlessly quotable and bears repeated viewing just to catch more great lines you may have missed the first time around. The story itself is refreshingly original and inventive too, even if it cribs from films of the past. 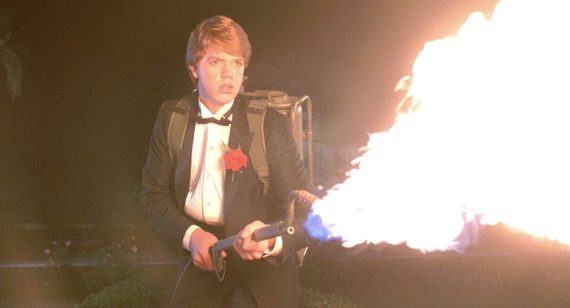 Adding to the success of the script are some enjoyable performances. Lively and Marshall have a great rapport, so their friendship is believable and has a heart that adds poignancy to later scenes between the pair. Atkins is a joy to watch too. He relishes in delivering his character’s badass one-liners, but equally handles the darker, troubled aspects of Cameron’s personality with sensitivity. Indeed the film takes some surprisingly heavy turns, particularly in the second half, but effectively balances this with humour when appropriate.

Dekker also proves himself to be a dab hand behind the camera. There are some impressively staged sequences, including some nice long, moving takes and an inventive spinning shot near the end. The whole film looks great in fact, with the 50s scenes being particularly handsome. Although not the scariest horror film I’ve seen, there are some effectively tense sequences too, such as when J.C. is trapped in a bathroom stall when a head-full of slug-creatures bursts forth.

For those interested in the differences between this ‘director’s cut’ and the original, it’s only apparent in the ending. * Please skip the rest of this paragraph if you don’t want the ending spoiled. * The theatrical version has a cheap and cruel gag where a dog’s head explodes, presumably killing our heroes. The director’s cut doesn’t let this happen, instead showing us Cameron’s charred body stumbling out of the house, unbeknownst to anyone else, before his head explodes and we see some slugs scurry towards the cemetery. The shot holds and we see the spaceship from the beginning appear overhead, aiming its searchlights at the graveyard before we cut to the credits. It’s a notable improvement, leaving the audience on tenterhooks without feeling like a cheap sequel-tease.

Night of the Creeps truly is an under-appreciated genre classic and stands among my favourite zombie movies. With a witty script, decent performances and an attractive visual style, it’s as classy as it is hugely enjoyable. 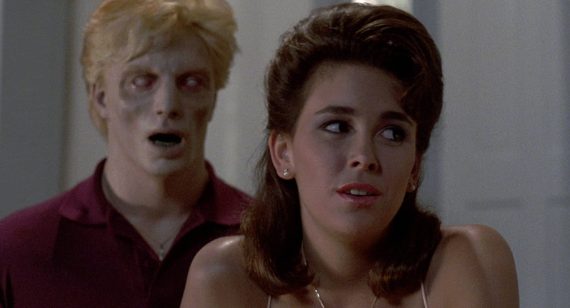 Night of the Creeps is out on 15th October on dual format Blu-Ray and DVD in the UK, released by Eureka as part of their Classics series. The transfer looks and sounds fantastic.

The commentaries are both great. Dekker’s is honest and crammed with details of the shoot as well as fun anecdotes. The cast one is just a bunch of friends having a laugh, reminiscing and teasing each other, and all the better for it. Dekker’s interview is very good too, although it covers some ground already covered in the commentary. The ‘Thrill Me’ video pieces come together to make a pretty thorough making-of that’s well worth your time too. The ‘Tom Atkins: Man of Action’ interview is entertaining and warm – he comes across as a very nice man who’s enjoyed his career in TV, theatre and the movies.

So it’s a wonderful set all in all and fingers crossed Eureka get their hands on The Monster Squad too!