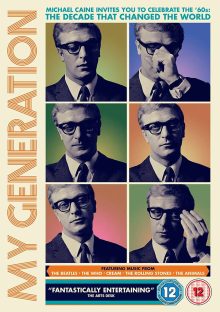 My Generation, David Batty’s documentary about the 60s cultural revolution, shoots itself in the foot at a very early stage when the film’s presenter Michael Caine describes pre-60s Britain as “conventional, predictable and dull.” Not only is the quote characteristic of My Generation’s penchant for a conveniently reductive version of history, it also hands critics the perfect headline for describing the film itself. Making a truly informative documentary is a difficult task; making it simultaneously entertaining even more so. A good documentary can pique your interest in a subject by which you’ve never been remotely fascinated before but a bad documentary can suck all the life out of something you adore. I’ve always been a huge fan of 60s pop culture and there’s nothing I like more at the end of a long week than popping on a BBC4 documentary on the music, fashions, films and attitudes of a bygone era. Although they often exceed expectations of quality, these hour-long TV documentaries can also be little more than a few talking heads punctuated by bursts of music or snippets of footage that I know inside-out and often that’s exactly what I want. But rarely do these nostalgic TV shows strive to make any great statement or deliver a definitive overview of an era. My Generation makes the mistake of attempting both and its gargantuan cinematic aspirations make it look all the smaller.

The major problem with My Generation is its hypocritical contradictions. It begins with Caine condemning the previous generation’s obsession with the mythical “good old days”, a notion he dismisses by offhandedly reciting a couple of choice downsides to life in the 40s and 50s. But later on he praises the creative boom of the 60s as being driven by people meeting and talking face to face rather than communicating through mobile devices. In condemning an earlier era’s conservatism and then using a later one’s innovations to illustrate how much better things were in his youth, Caine sums up the flagrant hypocrisy at My Generation’s core. Caine alone should not be blamed of course. The film was the result of a six year collaboration between several producers and writers. The film’s script is attributed to comedy legends Dick Clement and Ian La Frenais, which is somewhat surprising given the astute deconstruction of pointless nostalgia that characterised their 70s sitcom Whatever Happened to the Likely Lads. As is the case with Caine’s overly-rhapsodic narrator, genuine history seems to have taken a backseat to a brief demanding the fetishisation of a decade above any true insight.

The selection and editing of archive footage is crucial in a documentary like this but My Generation is a mess, eschewing any structure in favour of one big congealed stew in a pot labelled ‘THE 60S’. Images from the early 60s are scored by songs from the late 60s as interviews meander vaguely through different elements of the culture. An interesting throughline is introduced in which Caine’s own personal journey is represented through footage of his film characters or younger self walking down streets or through hallways but the illusion is shattered by the cheesy straight-to-camera inserts in which present-day Caine trots out the same anecdotes he’s been telling on talk shows for decades. They do have a place in the story, of course, but the presentation is so unutterably cheesy that it clashes further with the tales of exciting innovation and youthful exuberance. The waters are muddied even more by some of the interviewees misremembered details which discredit the film further. “We wrote their first number one” says Paul McCartney of the Rolling Stones’ number 12 hit ‘I Wanna Be Your Man.’ It feels as if the participants in My Generation are saying “this is our decade and we’ll remember it how we like.”

The 60s was undoubtedly a remarkable and important era which demands continued examination but an 85 minute, wilfully blinkered documentary with a clear desire to revel one-sidedly in the positives is not the way to go. There are plenty of similar documentaries out there in a pile to which My Generation can quickly and unrepentantly by consigned. Ironically, the audience that will most enjoy My Generation are those who now use the lambasted term “the good old days” to refer to the 60s itself. Anyone with an existing interest in the era that goes beyond a longing for a time when they had more energy and less grey hairs probably best steer clear.