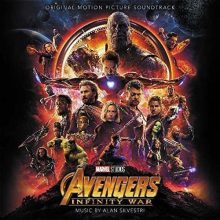 Duration: 106 min
Label: Marvel Music/Hollywood Records
Epic. What else can one say about the soundtrack to what must have been the most eagerly anticipated Marvel movie to date bar none. Helmed by none other than the excellent Alan Silvestri, this is nothing short of competent master craftsmanship at its best. The remit and scope of the film is humongous, as it encompasses the entire Marvel Cinematic Universe in a full on showdown with the ultimate super villain, Thanos.
The album starts off with Silvestri’s quintessential Avengers theme, followed by track-after-track of epic showdown music particularly track nos.:  5 – He Won’t Come Out, 6 – Field Trip, 9 – Help Arrives, and 17 – Is He Always Like This, 18 – More Power, and 19 – Charge, which chronicle the clash between Avengers and the forces of Thanos. Conflict is the central motif in a dramatic soundscape of sonic fervour as they battle overwhelming odds.
The soundtrack album is interspersed with some introspective, yet almost melancholic and foreboding counterpoints on tracks such as: 3 – Undying Fidelity, 4 – No More Surprises, 12 – Family Affairs, 14 – A Small Price To Pay, and 23, A lot to Figure Out, which serve to highlight the pain of defeat in the Avengers futile battle to preserve the lives of half the sentient beings across the universe. Finally, tracks such as: 20 – The End Game,  27 – Porch, and 26 – What Did It Cost help to round out the post apocalyptic scenes with a victorious Thanos reflecting on his accomplishment.
Overall, Silverstri does a great job of putting to music what can only be described as the MCU equivalent of the proverbial rapture. How do you capture the emotional impact of witnessing the indiscriminate and untimely mass demise of several key characters and ordinary folks in the movie? It takes a craftsman with carefully honed skills to accomplish this without being too overwhelmed by the film. I think the album stands testimony to this fact, especially because you can pretty much recall or figure out which scenes are supported by each of the tracks. My only gripe was the surfeit of orchestral horn sections on every track, which made it a fairly homogenous listening experience across the entire album. Other than that, it was great and I hope the next instalment of the film gets similar treatment.
Avengers: Infinity War (Original Motion Picture Soundtrack)
2018-05-30
4.0Overall Score
Reader Rating: (2 Votes)