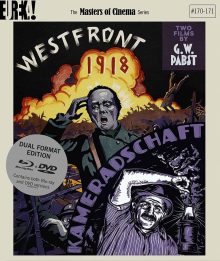 War films are a genre I’m always a little wary of. On one hand, some of the best examples rank among my favourite films of all time (I’d put Apocalypse Now in my top 5 for instance). On the other hand, they’re a type of film that can really bother me if they’re flawed. I tend to think I’m a generally positive critic. I rarely give very low scores or write venomous reviews, but when I do, it’s often for a war film that’s rubbed me up the wrong way. I think this is because they’re usually based on actual events, so when a hackneyed genre cliché, insensitive patriotism, or some hammy acting crops up, it stands out as feeling ‘fake’, glossing over some complex, important and/or often horrific events. I feel the same about biopics and any other ‘based on a true story’ films too. When I’m reminded I’m watching a film merely ‘based’ on reality, it takes me out of the experience and can feel disrespectful to those involved in what’s being portrayed. In films I know are pure fiction I can turn a blind eye to cinematic cliches more easily.

So I’ve always got my guard up when watching war films or anything based on reality, but I decided to take a chance with this double set of GW Pabst films, the war movie Westfront 1918 and the film he made a year later, based around a mining disaster, Kameradschaft. Pabst is a director whose work I hadn’t delved into yet and Eureka’s Master of Cinema label never releases anything not worth watching, so I left my reservations at the door and took two journeys into the past.

Released in the same year as the American film All Quiet on the Western Front, the German Westfront 1918 is another early example of an anti-war film tackling the horrifying events of World War I. It takes a straightforward route of simply presenting life in and out the trenches at the time, following a small handful of German infantrymen as they struggle to stay alive and sane. The sections away from the front lines show the hardships faced by those back home as well as some brief moments of relief the soldiers enjoy. It of course doesn’t end well for the group, as you’d expect from a pacifistic film. 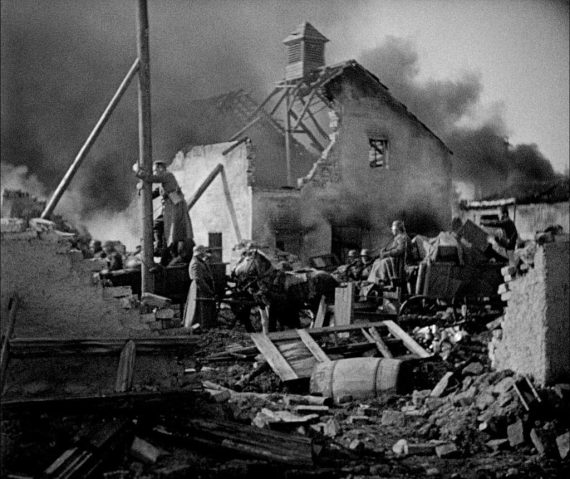 I only saw All Quiet on the Western Front for the first time a couple of years ago and I was astonished by how powerful it was, given its age. I had the same reaction to Westfront 1918, although it has a slightly different feel which gives it even more impact in some areas. All Quiet was fairly unflinching in its depiction of war, but had hints of sentimentality, such as the butterfly scene at the end, whereas Westfront 1918 has a tougher, less poetic approach. Don’t get me wrong, the final scene in All Quiet is hugely effective and will stay with me for a long time, but Westfront 1918 uses a colder unsentimental style that gets its message across in a slightly different fashion.

Like most great war movies, the set-pieces here are what really stick in your memory. The attacks over no-man’s land are particularly well done. Pabst includes a lot of movement, which was rare at this time when sound cinema was in its infancy and cameras were usually kept in booths to mask the noise. However, some of the most powerful shots in the battle scenes are static wide shots. These are held for a long time, accentuating the vast waves of soldiers sweeping across the screen and mostly getting mown down or blown up.

Some smaller scale scenes stand out too. In an attack early on in the film (by their fellow troops misjudging mortar fire) the soldiers’ dugout caves in and a couple of them are trapped inside, holding the roof up with their own bodies. They struggle to stay standing and breathing whilst their comrades try to dig them out, in an incredibly tense and disturbing scene. The home front segments are well done too. We see how hungry and desperate people were getting. One soldier comes home on leave only to catch his wife in bed with another man. We learn that she was only doing this to get some extra meat from the local butcher (no pun intended). 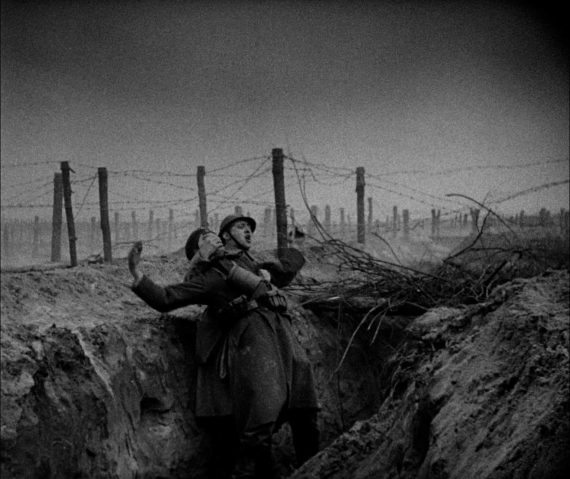 The film’s finale is deeply unsettling too. Rather than ending on the battlefields, we see one soldier taken to hospital after he loses his mind. There we see the horrific toll the war has taken on many of those who survived or at least hadn’t quite died yet. This also provides an example of the wonderful sound work done on the film. The screams and deranged singing of patients in the hospital are deeply disturbing and the battlefront effects elsewhere are effectively ominous too. The first ‘talky’ had only been released 3 years prior, so it’s astounding to see the medium being harnessed so brilliantly already.

All in all, it’s a strikingly frank, no-holds-barred war film that still has a visceral power nearly 90 years later. There are no patriotic heroics or forced morals. It simply shows the horrors of war from various angles to deliver a potent anti-war message.

Although not a war film as such, the shadow of WWI plays an important part in the other film included in this package, Kameradschaft. It tells the tale of a mining disaster on the border between France and Germany, where both German and French rescue teams came to the assistance of French miners trapped after an explosion. The actual incident, which claimed the lives of 1,099 people, happened in 1906, but Pabst and his team of writers moved it forward to just after the WWI, so it would work as a call for peace and brotherhood between nations caught up in the conflict.

This message may be a little blunt, particularly in a rousing speech at the end, but it’s a welcome and admirable one, so didn’t bother me. It’s effectively tackled with humour occasionally too, such as in an early scene where three Germans go for a night out in a French town and struggle with the language barrier. The film around the message is so well made though, I simply didn’t care about how bluntly it was put across, because I loved this is as much as I did Westfront 1918. 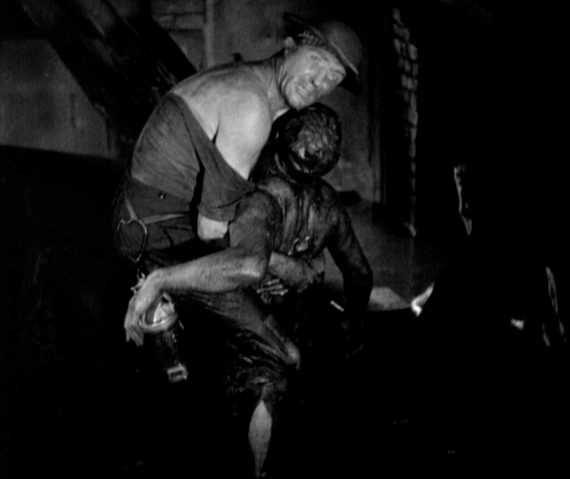 The most striking aspect of the film is its look. Not only is the cinematography impressive, with atmospheric low key lighting and plenty of movement in the camera as it moves along the narrow mineshafts, but the production design is incredible. The mines themselves seem totally real, which is quite a feat for a film of its age. They look as grim, oppressive and claustrophobic as you’d imagine them to be. There are some other impressive sets (or possibly locations – it’s hard to tell!) outside the mines too, particularly a huge washing hall with hundreds of chains dangling from the ceiling for the miners to hang their outfits (see image below). The pyrotechnics on display when the explosion occurs are impressive and make for some powerful visuals too.

The film is also tremendously exciting, even if it’s a little slow by today’s standards. The explosion and resulting collapse of much of the mine is intense and genuinely frightening, particularly when you realise this happened for real, and not just in the disaster depicted here. Tension is well drawn too, not only in some tight situations in the mines, but above ground. The best example of this is when the explosion is first noticed and you see a crowd gradually build and move ever faster in a great wave towards the gates of the mine. It’s a quietly effective sequence that builds panic and fear better than any overwrought histrionics. 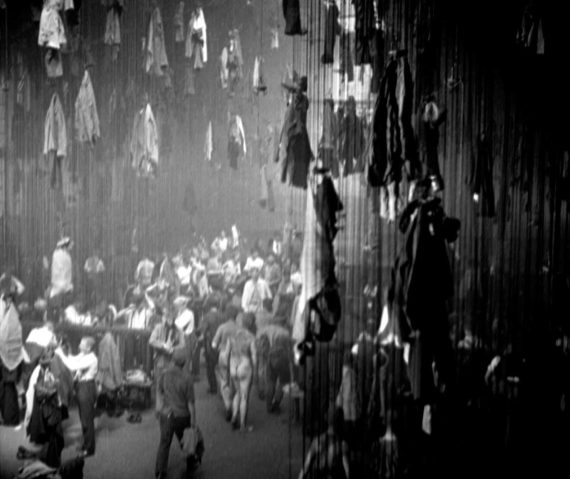 Once again, sound is well utilized in the film. During the collapse we hear the cracking of beams spreading down the mine, which makes for a terrifying soundtrack. Some eerie scenes that follow a lone elderly miner on a hunt for his grandson through the corpse-strewn wreckage puts silence to great use too. On a more hopeful note, the noise of miners tapping on pipes to let others know they’re alive is a nice touch, particularly near the end when rescuers tap back and the taps build and seamlessly turn to the sound of shovels and pick axes digging through. Tapping is blended with machine gun fire at one point too, when a trapped miner has a flashback to the war after he’s greeted by a German rescuer.

Overall it’s a gripping disaster movie with a rousing message. Yes it has a political agenda, but the belief that people should live and work together in harmony is hardly a dangerous one. It’s only aged a fraction in terms of pacing – otherwise it holds up remarkably well with some striking visuals and great use of sound and practical special effects. It’s an impressive work that deserves greater recognition.

Westfront 1918/Kameradschaft is out on 24th July on Dual Format DVD & Blu-Ray in the UK, released by Eureka as part of their Masters of Cinema series. The picture and audio quality is very good considering the original negatives were lost. Westfront 1918 comes out better than Kameradschaft though which is generally softer and the sound suffers from slight noise problems occasionally.

You don’t get a lot of special features, just introductions to both films by Jan-Christopher Horak. These are excellent though and provide some valuable insight and background to the films. You get the usual booklet on top of this too. I haven’t been sent it, but Eureka usually do a first rate job of compiling these so I imagine it’ll be as worthwhile as any video featurette.