We spoke to Franco Lolli, director of the award-winning Gente de bien, about his critically acclaimed film which hits DVD and VOD today in the UK.

1. Tell us about the film?
This is my first feature. It tells the story of a reunion between a father, Gabriel, and his son Eric, both coming from a very humble background. They haven’t seen each other in a very long time, but for various reasons they have been forced to live together again. This is a film about the meaning of family, and how we belong to it in today’s very socially divided Colombia.

2. How did you cast the young boy in the film?
It was a very long process that took us over seven months, initially working with one casting director but ending up with two, plus six assistants. We auditioned around 2,000 kids – visiting schools, the Colombian Family Welfare Institute and orphanages, especially as the film approaches the subject of abandonment and the feelings around it. But even after this I couldn’t find the kid I was looking for the role of Eric. Casually, one day during the process of auditioning the father (by the way that was also very difficult too!), walking on the streets of Bogotá at around 10pm I saw a kid from a distance. I always carried with me a copy of auditioning script so we approached him and his stepfather, who encouraged him to show us his acting skills. He was very good, we had a laugh, and the day after, the casting director saw him again, giving us the opportunity to get to know him. His life couldn’t be closer to the actual role’s life. He was very sweet and intelligent, the kind of kid you want to adopt and love. Overall though, it wasn’t an easy process.

3. Is there a reason you like to work with non-professional actors?
For me there are two fundamental reasons I like to work with non-professional actors, particularly in Colombia. Firstly, it is almost a political reason. Traditionally the lower classes and certain sectors of the Colombian society are underrepresented in films; farmers or people living in the suburbs etc, are generally played by actors with a middle or upper middle class background, which is not accurate and has never been entirely convincing. And the second reason is related to my personal background, also coming from a wealthy family, allowing non professionals actors to represent their real lives, opens the doors to a more natural approach to portrayal of actual characters. Improvisation also increased my knowledge and understanding of their day-to-day lives making me more sensitive to the reality of my country. Lastly, it is important to mention that in Colombia there is lack of talent at the moment and actors have only been trained for TV. 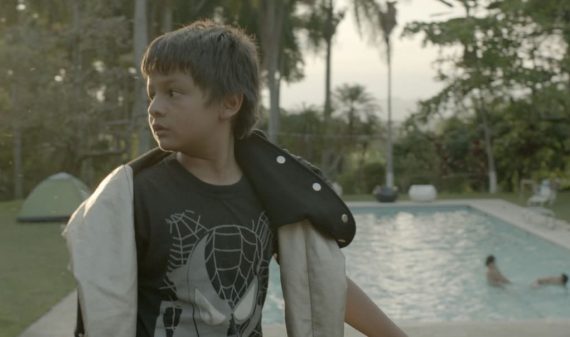 4. They say never work with children and animals, and you work with both in this film! How did you find it?
They are right. In some ways that’s correct, but at the same time I feel that they are the only ones that perform really well, because they are not acting! The only issue is that they generally don’t do what we want, but do what they feel is right. I don’t consider having shots where Eric is not doing well, same with Lupe, they just do what they like. I love kids and animals so it was a privilege to work with both in my film, although I have to admit I lost my patience several times!

5. What feedback have you had from people who have seen the film on how it depicts Colombia?
To be honest it has been received very well everywhere. In France, Colombia and other countries, people actually cried during the screening. I have had many emotional moments during Q&As, even from people who are not necessarily Colombians. People have felt very touched by the subject. The film is very personal and it is a real story and autobiographical. I feel many people identified that and thanked me for opening that window for them. Regarding of how it depicts Colombia, people are generally very grateful that I am showing a different face of our country beyond the usual clichés of drug trafficking, prostitution and violence. I do respect Victor Gaviria’s (Colombian filmmaker) work because he has been researching for years and is genuinely interested in these subjects. However there are other directors who only approach these subjects because of its commercial appeal. There is so much to explore in Colombia.

6. Do you take into account international audiences when you make a film?
Yes and no. I tend to think of myself as a spectator and I feel that’s the best way to create a work. I make films that I would like to watch. There is a phrase: “if you want to talk about the world, talk about your people”. It might not make much sense in English but it is about how your message can reach audiences regardless of geographical and cultural differences.

7. You speak Spanish, French and English. Would you ever make a film that wasn’t in Spanish?
Yes, initially I considered France where I have made several shorts, or perhaps an English speaking country. Also, it would be good to work with professional actors and explore options in countries like the UK or France, but for now my priority is to work in Colombia with its innumerable stories, history and experiences in our native language, Spanish.

8. What’s your next project?
I have two projects in mind, but I do prefer to reveal more details once there is more certainty about them. My mother has played a key role in my life and for a long time I have wanted to work with her. There is another project that will explore the other side of the very complex and intrinsic social class system in Colombia, this time talking about the life of a rich teenager.

Gente de bien by Franco Lolli is out on DVD on 25 May 2015, and is available on iTunes, BFI Player and Curzon On Demand.