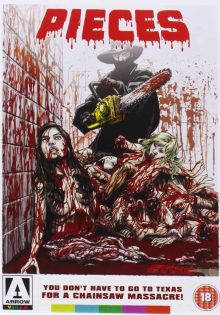 Suburbia in Boston, in 1942, and a young lad is putting together a nudie jigsaw puzzle. He is caught by his strict, disapproving mum. Rather than take her confiscation of his jigsaw puzzle on the chin he turns on her, killing her with an axe; chopping her into pieces. A bit of an overreaction on both their parts, me thinks! Pretending he had nothing to do with the murder, the cops later find the boy hiding in a cupboard, sobbing his eyes out.

Forty years later and the scene shifts to a large university campus where a stocky guy saws a student’s head off with a chainsaw. A police detective, played by genre stalwart Christopher George, turns up on the scene and begins to sniff around. When other murders take place on campus, and in a desperate bid to catch the serial killer in their midst, the cops enlist the help of ex-tennis player, Mary Riggs (Linda Day), to coach tennis at the university and see if she can find out what’s going on from her undercover position.

Increasingly violent deaths occur and more suspects emerge from the shadows, including a certain Professor Arthur Brown (I wonder if he liked the song ‘Fire’ by his namesake?). The police are baffled (aren’t they always in Euro-horror films!) and time is running out for the cop’s latest recruit as the killer has her in his deranged sights. 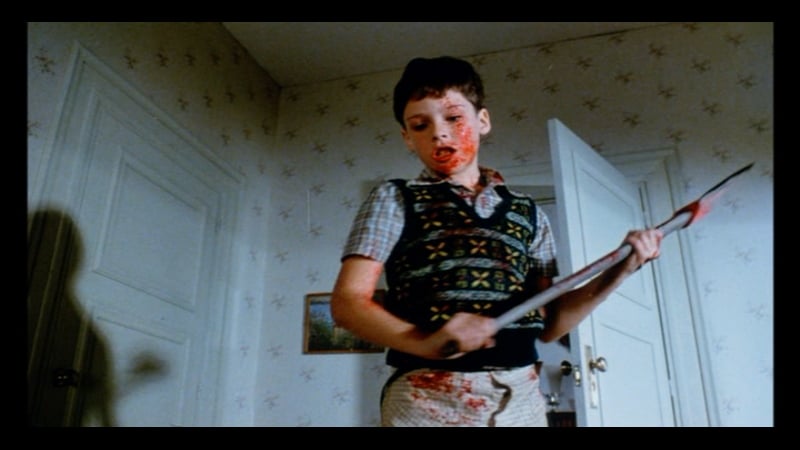 I have to admit right here and now that Pieces is one of my all-time guiltiest pleasures. It’s really inept in so many ways, but also gleefully good fun, and wonderfully over-the-top, in a cheese-tastic kind of way.

Back in the early noughties I even obtained a 35mm print of the film, which I screened at a couple of horror film festivals that I used to run back then (BloodBath in, cough, Bath and later in Bristol). Hence, I’m so glad that Arrow Video has released a really good version of the movie, compete with more extras than you can shake a fist at.

Simon’s film is well shot, for the most part; is well produced, with some terrific use of lighting, so much so that at times it feels more like an Italian giallo than a Spanish slasher film. The soundtrack, by CAM, also reminds the more knowledgeable viewer of past giallos by a certain Dario Argento, since the score here is very ‘Goblinesque’.

There’s also lots of black humour throughout the film, including some unintentionally amusing moments such as the completely bizarre inclusion of a random kung-fu attack, ending with the ninja in question getting kicked in the nuts by our tennis playing heroine, resulting in the assailant complaining about ‘bad chop suey’ before going on his way! Another bizarrely funny scene involves a girl on a skateboard and a sheet of plate glass being carried by two removal fellas. Talk about random inserts! 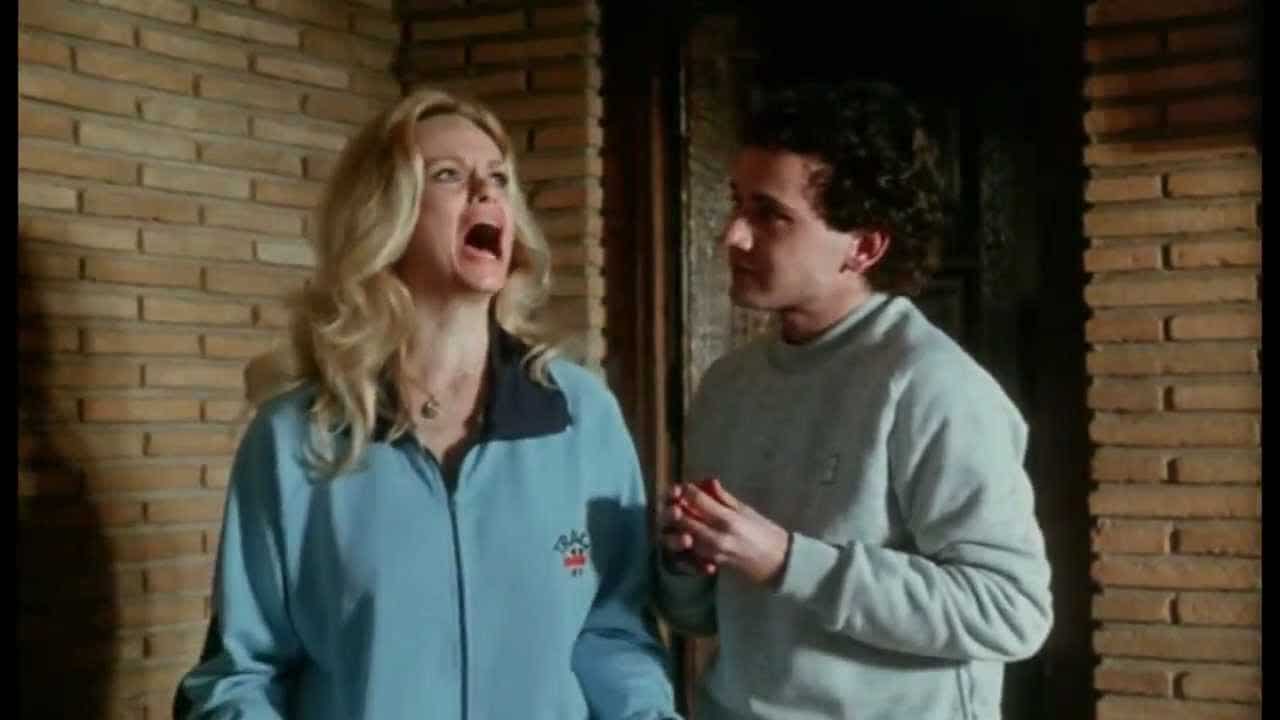 This being a Piquer Simon film, the special effects are pretty good, given the budget, with some cool chainsaw action resulting in lots of icky, almost carnival, carnage. And, this being Euro-sleaze, there are plenty of voluptuous women on display, not wearing much. Oh, and there’s lots of phallic imagery (mainly of a chainsaw variety) sprinkled liberally throughout.

The film is quite barmy and has one of the strangest, laugh out loud final shots of all time. And, to sum up, I can’t recommend it enough to Euro horror fans.

Arrow Video are distributing Pieces on DVD and Blu-ray. As per usual with Arrow Video there are some decent extras on the disc including:

One of the talking heads quite rightly brings up the issue of the piss-poor translation from Spanish to English – apparently, the Spanish version is a lot more serious in tone than the American version.

A Thousand Screams (28 mins) – an interview with art director Gonzalo Gonzalo who chats about working with Simon on a couple of films including ‘The Rift’. He reports that Simon would often stop filming for a nap! 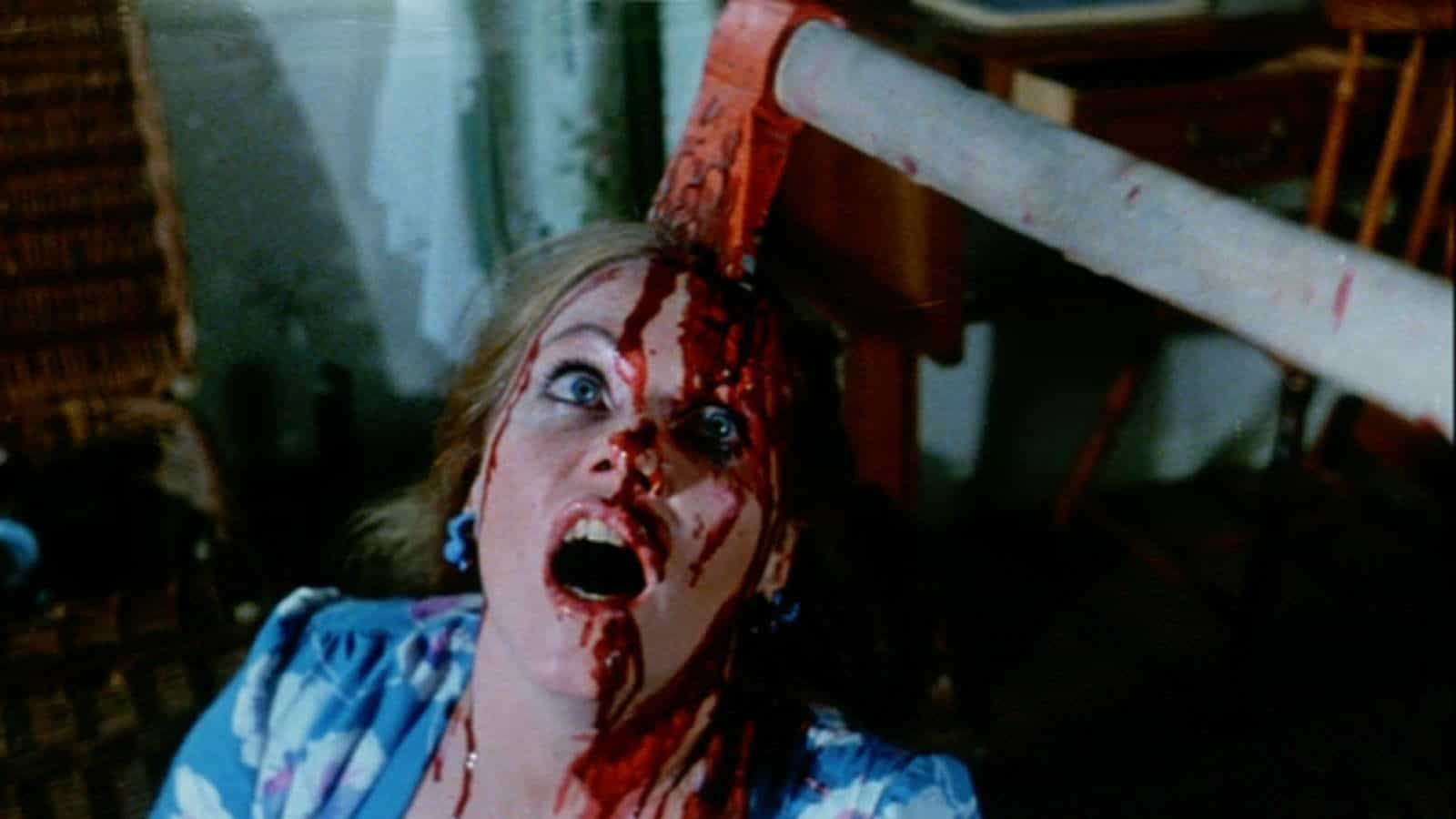 Falling to pieces (9 mins) – Spanish filmmaker Sergio Blasco talks about his friendship with Simon and the script of their unfinished sequel to ‘Pieces’.

Pieces of Piquer (55.5 mins) – an archive interview with Simon.

Paul Smith: The Reddest Herring (58 mins) – an interview with actor Paul Smith about his role as the crazy caretaker/gardener in the film.

Steve Minasian interview (3 mins) – a short audio-only interview with the producer of Pieces. He explains they lost the majority of the money owed to them as a distributor ran off with most of the money, and to make matters worse they never got an advance. Plus, he reveals that actress Linda Day couldn’t actually play tennis!

Galleries – made up of 18 production stills, 20 publicity material photos and 37 images displaying the various video releases, including the better title of ‘Chainsaw Devil’. Also, Bits & Pieces (58 stills) which features all sorts of advertising stuff and a list showing the top grossing films with Pieces featuring just below Tom Cruise starrer Risky Business one week. 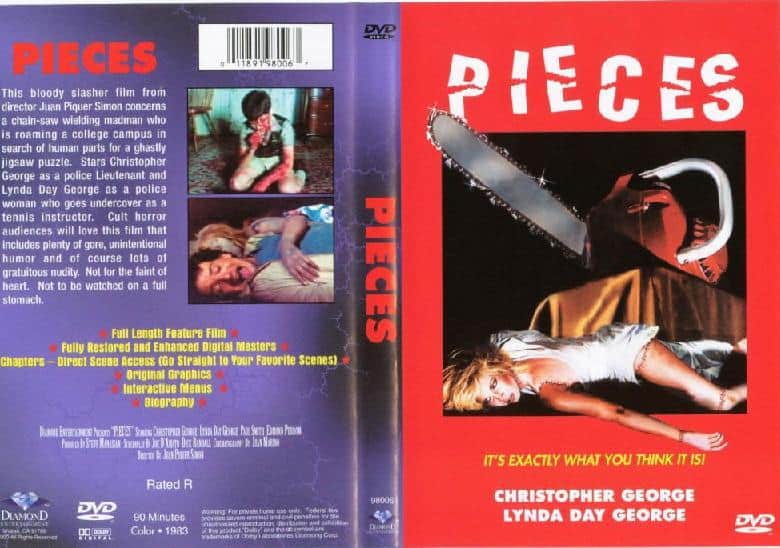