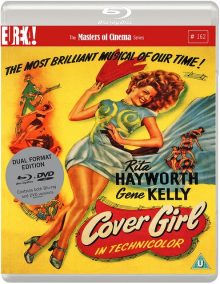 Officially, I’m a big fan of musicals. These days it’s not a fashionable thing to admit but I adore a big Technicolor romp with uplifting songs, eye-popping choreography, sizzling one-liners and simplified romantic plotlines. Just imagining my favourite moments from these pouting productions makes me grin like a buffoon. However, when I feel I need a little cheering up and decide to put on one of these candy-coloured treats to turn my frown upside-down, I find it’s always the same one I go looking for – Singin’ in the Rain. Now this might not be surprising given that Staley Donen’s masterpiece is widely considered not only the pinnacle of the genre but one of the greatest movies of any genre. But then I start thinking through the alternatives and I realise that the highlight reel I played through in my head, the one that made me smile like a child, is actually a collection of the only bits I truly love from those musicals. When I look to the accepted canon, I find that Gene Kelly’s dance with Jerry Mouse from Anchors Aweigh is the clear highlight of a fairly flabby feature; that the beautiful ballet at the climax of An American in Paris towers over the rest of that hotch-potch revue; that the enthusiastic highpoints of On the Town are balanced by grating and sometimes mean-spirited lows.

There is more to the musical than this handful of 40s and 50s mainstays and unusual, ambitious films before and since have utilised song and dance to enhance, rather than replace, great storytelling. But the reason this glut of MGM linchpins are the first things that come to mind when someone speaks of musicals is that their major set-pieces are knockouts that exceed the centrepieces of many other films that are more well-rounded overall but lack the aggressive punch of a history-making moment to really make their mark. Cover Girl very much belongs to the strain of musicals that foregrounds the singing, dancing and visual splash to hide a weak plot and, in common with the aforementioned flawed films, it feels overlong, lumpy and inconsequential whenever the music stops. It also suffers from a lack of memorable songs, its one famous number being the romantic ballad ‘Long Ago (And Far Away)’, a song I have little love for or, in common with the majority of the film’s songs, recollection of. But hang on a sec, before we go tearing Cover Girl to shreds over its numerous flaws, we should acknowledge its importance to the genre. Although it is comparatively little-known nowadays, Cover Girl was a huge hit in its time, significantly boosting the careers of stars Rita Hayworth and Gene Kelly. Kelly was not being taken seriously by MGM when they loaned him out to Columbia Pictures to make Cover Girl. Afterwards, MGM were never so generous with their star again. 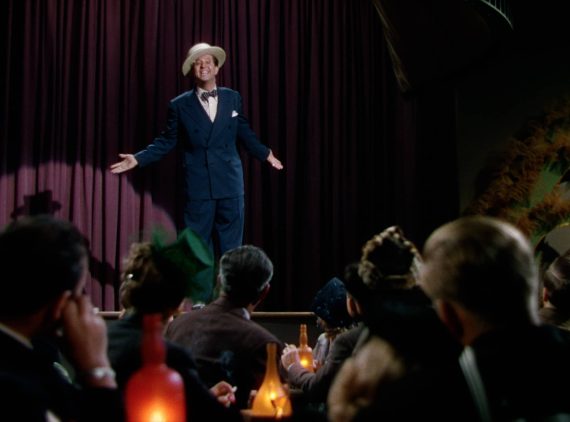 When it comes to these musicals that have been lost in the annals of time, I often enter into them with a slightly heavy heart, making the criminal and dunderheaded error of believing that if there were any particularly worthwhile routines in there I would have heard about them already in the many documentaries I’ve seen and books I’ve read on old Hollywood. I don’t know why I ever still listen to that little voice when so many of my favourite cinematic treasures are those I’ve ferreted out of dark, undisturbed corners and which feel all the more precious for their undiscovered status. And once again, the little voice was wrong because, though it is home to far more unremarkable numbers, there are a couple of routines in Cover Girl that just leap off the screen and almost made me leap off my seat. One in particular seems bewilderingly unknown for such seemingly groundbreaking work and I filed it away alongside illustrious company in that mental highlights package before it was even over. The routine in question is called ‘Alter Ego’ and was conceived and directed by Gene Kelly and a 19 year old Stanley Donen when Cover Girl’s director Charles Vidor declared the concept impossible to put on screen. It comes at a point in the film in which Kelly’s club owner Danny McGuire is particularly down in the mouth and turns to his conscience personified for advice. The conscience is portrayed as Kelly’s own image in a reflection which talks back to him and gives him a stern reprimand, a device used many times before and since. It is far rarer to then see a man and his reflection perform a dance routine side by side in the street. Kelly’s dancing is always mesmeric but watching him partner himself is astonishing and the piece works wonderfully, making Cover Girl briefly soar when it had previously been trundling. 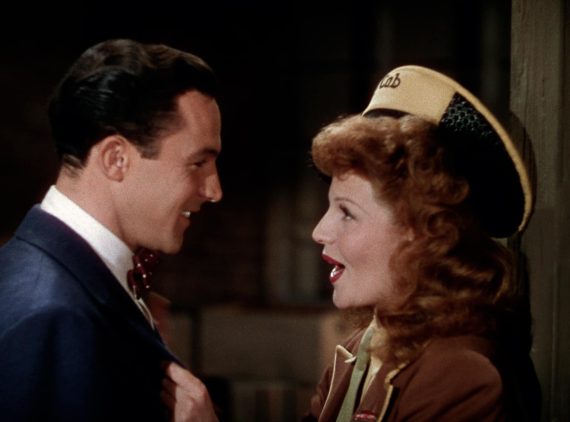 There are other highpoints in Cover Girl, all involving Kelly. The song ‘Put Me to the Test’, while not a particularly memorable tune, is accompanied by a superb routine in which Kelly attempts to dance with a series of women, finally resorting to partnering a shop dummy which he suddenly finds replaced by Hayworth for a lovely finale. There is also a lengthy dancing-in-the-street routine by the three leads called ‘Make Way for Tomorrow’ which is interesting for its clear foreshadowing of moments in Singin’ in the Rain, as well as the revelation that Phil Silvers is not a bad dancer. But there’s something not quite right about ‘Make Way for Tomorrow’ and it is key in identifying one of the film’s major flaws. The three leads, Kelly, Hayworth and Silvers, are meant to be great pals and Hayworth and Kelly romantically involved. But there is little chemistry between any of the actors. The routine is immediately preceded by an excruciatingly brash bit in which the three ‘friends’ enter a restaurant, order oysters (which they hate) for the purpose of looking for a pearl in them. This tradition proves to be pivotal to the plot but it is oversold, with the three actors bellowing silly incantations with an ain’t-we-cute over-enthusiasm. In the process, the concept is undersold and the impression is less of three pals having a ball and more of three stars vying for the spotlight and fumbling the scene in the process. So when ‘Make Way for Tomorrow’ comes, it feels forced rather than joyous.

Silvers’ performance is one of Cover Girl’s big problems. It was traditional to have the third lead be a wisecracking comedy sidekick and this role was often taken by the likes of Oscar Levant or Donald O’Connor (whose Cosmo Brown in Singin’ in the Rain is the pinnacle of this type) but Silvers performance is loud and irritating, making his oddly-named character Genius seem more like a detached gag machine than the warm and caring human being he is meant to be. In the comedy stakes, Cover Girl is saved by the wonderful Eve Arden whose performance as magazine editor Cornelia ‘Stonewall’ Jackson hits all the right notes. Arden delivers acerbic one-liners with a deftness that makes the character an amusing hardass without denying her essential humanity either. While Cover Girl was designed as a film to make a star of Rita Hayworth and is stuffed to the gills with attractive women posing for the camera, it is Arden who truly lights up the screen whenever she appears. 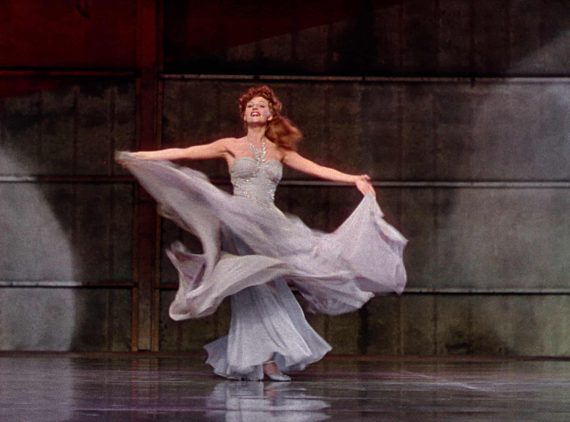 Cover Girl’s plot is paper thin and this wouldn’t have mattered so much had there been the strong songs and dance routines to support it. But with only two really magical moments and a lot of misfires, the age old story of the woman torn between true love and international fame feels like a soggy retread. Some effort is made to inject some originality by including an odd series of scenes that flashback to the stage career of Hayworth’s character’s grandmother, also played by Hayworth. While these are tied in with the past of Otto Kruger’s magazine editor John Coudair, who selects Hayworth as a potential cover star based on her resemblance to his former love, they feel like superfluous padding in a film that would have benefited from being a good twenty minutes shorter. In conclusion, Cover Girl was about what I expected from a musical that has fallen out of the public consciousness but it is definitely worth seeing for the aforementioned unexpected highlights as well as its historical significance in the careers of both Hayworth and Kelly. It certainly won’t convert any doubters to the magic of musicals but fans of the genre like myself will have a good enough time and leave with some new must-see dance routine spliced into their mental highlight reels.

Cover Girl is released by Eureka! Entertainment on 13 February 2017 on Dual Format Blu-ray and DVD. Special feature are as follows: