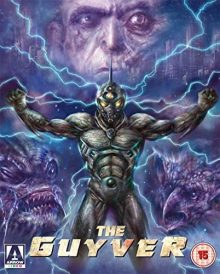 With the live action remake of Ghost in the Shell just around the corner, I thought it might be appropriate to look at an earlier Hollywood adaptation of a popular manga and anime, The Guyver. Back in 1991, cult horror producer Brian Yuzna (Re-Animator, From Beyond and director of Society) gave two special effects/make-up masters, Screaming Mad George (Society) and Steve Wang (Predator), a chance to direct their first film together. Supposedly each took on different scenes themselves rather than working together on set. The result is this action sci-fi oddity, which Arrow Video have re-released on dual-format Blu-Ray and DVD.

The Guyver opens with the scientist Dr. Segawa (Greg Joung Paik) on the run. He’s taken a secret biomechanical device known as the Guyver from the lab to keep it out of the hands of his evil boss Fulton Balcus (David Gale), who has been experimenting on humans to develop military secrets. Segawa is killed by Balcus’ henchmen, but not before he hides the Guyver with the intention of giving it to detective Max Reed (Mark Hamill). A young loser called Sean Barker (Jack Armstrong) finds it first though, and, after a run in with some thugs, it fuses with his body, turning him into The Guyver. So from then on, Balcus and his goons (who are mutants that can turn into powerful monsters at will), along with Reed and Dr. Segawa’s daughter Mizky (Vivian Wu) all want their hands on Barker to unlock the device’s secrets.

A friend recommended this to me a while ago, so I was quite keen to check it out, but I had mixed feelings in the end. The first half in particular is pretty weak. I expected the film to be a bit silly, but the comedy, particularly from the two bad guy sidekicks, is pretty cringeworthy. One is dressed in some sort of S & M gear and the other insists on rapping incredibly badly at regular intervals. Whenever they’re on screen the film suffers. The writing isn’t particularly good either, opting for a rather generic ‘hunt for the MacGuffin’ plot and lacking any sharp dialogue to back up the often comic tone.

The performances are a real mixed bag too. A few recognisable cult horror actors excel in villainous roles – Gale, Michael Berryman and a cameo from Re-Animator’sJeffrey Combs, but the rest of the cast are pretty poor. Hamill is woefully miscast as a tough, grizzled detective and the film’s two protagonists, Armstrong and Wu, are ropey and painfully bland. 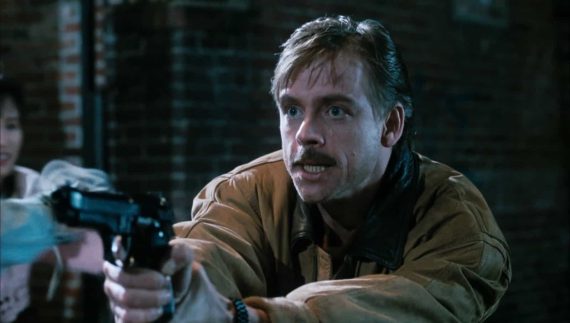 It’s not all bad news though. Once the Guyver comes properly into play in the second half, the film steps up a gear. There’s plenty of action and although it’s hardly Hong Kong level choreography, the fight scenes are pretty high impact and surprisingly violent at times (maybe not so surprising given the pedigree of those involved).

Most impressive however, are the make-up and special effects. Granted, there are a couple of dated shots here and there, but for a film that’s now 26 years old, the effects hold up really well. The monsters are clearly men in suits for the most part, but the seams aren’t clear and the actors can still move very well. There are some effectively gory and icky sequences too, particularly a gruesome transformation near the end.

The great make-up effects and fun action scenes make it worth a watch then, but poor performances, a lacklustre script and bland direction keep the film from being particularly noteworthy. It’s entertaining enough in a goofy sort of way though, once you get past the film’s flaws.

The Guyver is out now on dual format Blu-Ray and DVD in the UK, released by Arrow Video. I saw the Blu-Ray version and the picture and sound quality was excellent as usual for the label.

There’s only one notable extra feature beyond the usual trailers and image galleries, and that’s a brand new interview with producer Brian Yuzna, which isn’t particularly long, but is well worth a watch.