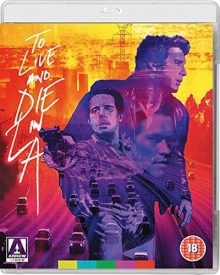 When his long-time partner is killed in the line of duty by a gang of high-end counterfeiters, just days before his retirement, secret service agent Richard Chance (Petersen) focuses all his considerable energies on tracking and ‘bringing down’ whoever was responsible, at whatever cost.

If that sounds like a fairly derivative plot, that’s because it is, but there’s a lot more to this underrated slice of eighties action film than one would at first expect. The first thing to note is the more complex central characters than you usually find in an action-thriller such as this. Richard Chance, for example, is a man who, like many cops, has spent too much time swimming in shit and now reeks of it himself, metaphorically speaking. His moral compass is, therefore, pretty low, and he uses people ruthlessly to get what he wants. For instance, he abuses his authority when dealing with a female informant, who’s out on parole. You get the feeling that if she refuses him anything – including sexual favours – he’ll see to it that her parole will be terminated immediately and she’ll be back in prison before she can even pull on a clean pair of undies!

At the other end of the spectrum is the man that Chance is chasing, namely Eric Masters (Dafoe), who is something of enigma. He creates top class counterfeit notes, which he then sells on the black market to fund his lifestyle of being a sometimes artist who seems to like nothing better than spending time creating off-kilter art only to then burn it! His squeeze, Bianca (Debra Fever), is also a peculiar character, being a Kabuki dancer by trade and a restless bisexual during her chill-out time. 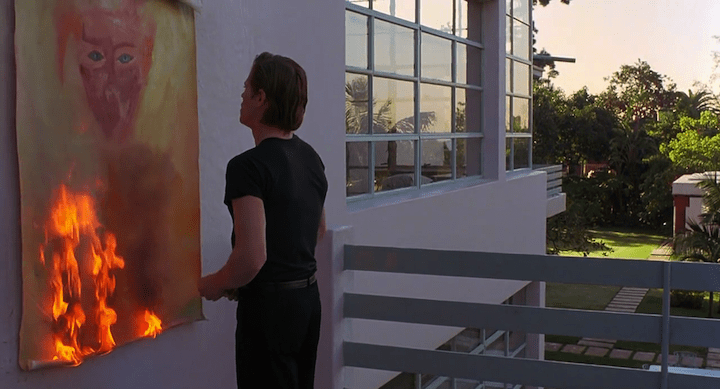 With so many odd characters shoehorned into the film Chance’s new partner, John Vulcovich, (Pankow) comes across as a breath of more conventional, conservative air. He prefers doing things by the book, but ‘is no snitch’ so chooses to reluctantly ignore many of his crazier partner’s idiosyncrasies, and ends up breaking almost as many laws as his colleague. In fact, it’s John who becomes our gateway into this world and it is his story-arc that is probably of most interest, with John slowly turning into a clone of his more deranged partner as the film runs on.

The film is expertly shot, and the city of LA becomes an additional character in the film, with some amazing scenes set in the early hours of the morning or in the dockland area, which gives the movie a distinctive flavour all of its own.

The action sequences, when they come, are tough, violent and exciting, particularly a car chase, which ups the ante on Friedkin’s The French Connection chase. This sequence also boasts a number of cinema firsts, including jack-knifing an arctic lorry and having cars drive up the wrong way of the wrong carriageway.

To Live and Die in LA also features an iconic film score by Wang Chung, an umbrella name for a couple of pop musicians from the UK, who Friedkin happened to like the work of. And, although it’s very eighties in sound and definition, it still works today, and complements the film really well. 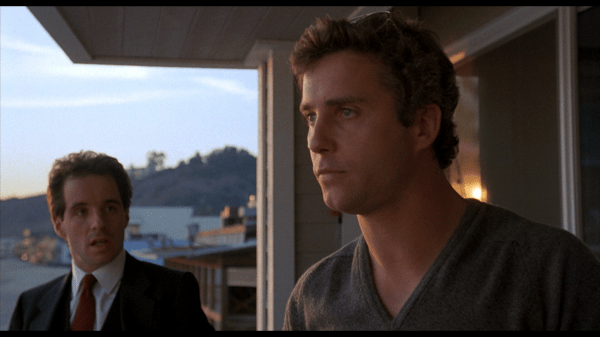 And, most importantly, the story holds the viewer’s attention and doesn’t always go where you think it will, and the ending is particularly brave. In fact Friedkin was asked to shoot another, more up-beat ending, but they finally ended up using the darker conclusion, which I think was the right decision. You can see the alternative ending as an extra on the Blu-ray.

All in all, To Live and Die in LA is a very satisfying crime film that works on many levels and rewards repeat viewings; especially since it features the lovely actress Jane Leaves before she ended up in one of the best American sit-coms, Frazier). Highly recommended.

Arrow Video is distributing To Live and Die in LA on DVD and Blu-ray. As per usual with Arrow Video there are some decent extras on the disc including:

Taking a Chance – a 21 minute interview with actor William Peterson who talks about how he got involved (apparently actor Gary Sinese recommended him); what it was like working with Friedkin (who apparently liked filming and using rehearsal footage); and how he totalled an expensive camera while filming part of the car chase.

Doctor for a day – a 9 minute interview with actor Dwier Brown, who plays a doctor in a fairly brief scene. Apparently the scene was filmed in an abandoned hospital, and he found Billy to be great to work for. This was his first feature. 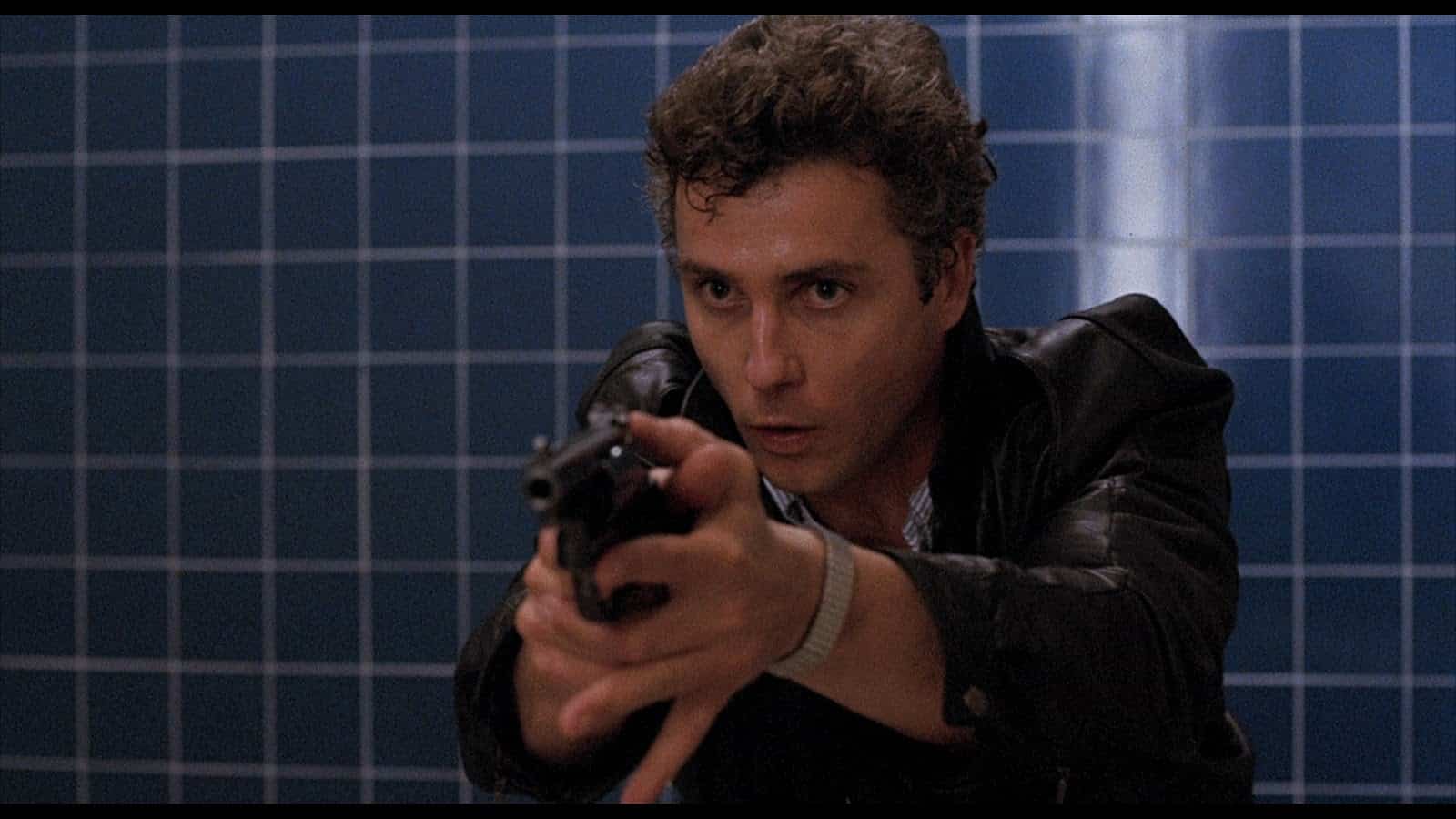 Renaissance Woman in LA – a 15 minute interview with actress Debra Feur (aka Bianca) who discussed why she was fascinated with her character and how Friedkin asked her to wear mostly her own wardrobe since he liked what she came onto set in so much. Apparently, contrary to popular belief, she found him to be very pleasant and a real gentleman.

So in Phase: Scoring the film (13 mins) – Wang Chung (which apparently means ‘Yellow Bell’ in Chinese), the composers of the soundtrack, talk about how they came to be involved, which was mainly off the back of a previous track of theirs called ‘Wait’ from their second album, Points on the Curve, which Billy had already used as filler music. William Friedkin later directed their music video for the title track of their next album, To Live and Die in LA.

Wrong Way: The Stunts (36 mins) – an interview with stunt co-ordinator Buddy Joe Hooker. Here Buddy goes into quite a bit of detail into how the stunts were accomplished and where the ideas came from. He, himself, did a couple of the bigger stunts including the car jumping over the railway tracks ahead of the train and the final all-over burn gig. Apparently no one was hurt during the shoot, which was probably one of the reasons Friedkin has hired him many times since.

Counterfeit World (30 mins) – a featurette containing previously shot interviews with most of the main players in the film, including Willem Dafoe. In this mini documentary Friedkin says he sees the film as being all about counterfeit relations. He also reveals that the film cost about $6 million, and they were able to do it relatively cheaply because most of the crew were non-union.

Deleted scene (and William Friedkin intro) – this is a brief scene where Petersen’s younger partner tries to reconcile with his estranged wife with somewhat less than positive results!

Stills and photo gallery – a variety of 125 images from the movie, and behind the scenes, including some press shots for the actors. 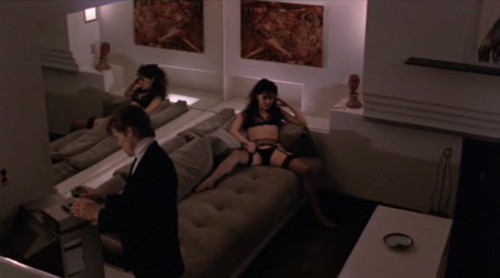 Radio spot (1 min) – a husky voiced man does a trailer for radio!

Theatrical trailers (3.5 mins) – the main one is full of lots of fast, (one or two frame) cuts, while the second is more traditional in nature.

Audio commentary by William Friedkin – he initially talks about the origins of the movie, from the novel by Gerald Petievich, which he found fascinating because he thought it was weird that secret service agents could be guarding the US President one minute and then the very next day could be frisking someone down looking for fake credit cards!