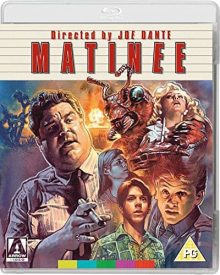 Few directors love cinema as much or as visibly as Joe Dante. A filmmaker who always puts his passions up on the screen for all to see, Dante is a fan of classic Hollywood cartoons and American B-Movies of the 50s and 60s in particular. This obsession with the colourful, the humorous (be it purposeful or accidental) and the ridiculous is clear in pretty much every film Dante has ever made and while it frequently results in some of the most entertaining films of their era, the B-Movie worship in particular has also created an inconsistency in quality that the more perceptive viewer might expect and, in a perverse way, even hope for in a director like Dante.

Although he has had his hits, Dante has never become quite the household name that some of his contemporaries did. While this is unfortunate in the sense that it imposed limitations on a very promising director, it is also fitting given his inspirations. A Dante film with a Spielberg budget, for instance, would likely be a charmless disaster, with none of the handmade, organic feel that pervades his best work. There is always a sense with Dante that at any minute his films could become too silly or take a narrative turn that is just too obscure which arguably keeps audiences engaged more than the knowledge that they are in safe, predictable hands. Dante’s 1985 sci-fi comedy Explorers is a prime example. It begins as a terrific adventure story which builds beautifully through its first two acts, before completely torpedoing everything that went before it with the most arch, disappointing and ill-fitting climax imaginable. But when he’s on form, Dante manages to skirt the edge of ridiculousness to exactly the right extent, evoking his influences without tumbling into the trap of assuming their flaws. Innerspace and the Gremlins films are well-loved examples, with the overstuffed, self-referential, chaotic wit of Gremlins 2 pushing the formula as far as it can go without breaking. 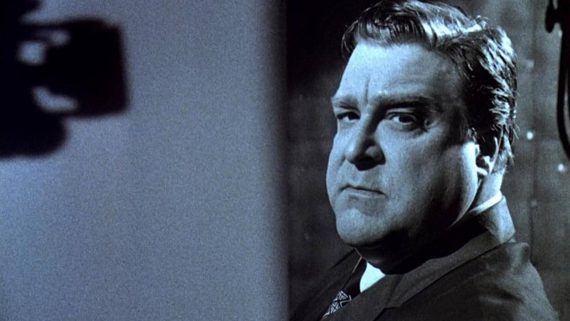 But Dante’s very best film is one of his least well-known. Emerging quietly to decent reviews in 1993, Matinee came and went without causing much fuss and, though it picked up a cult following on television, it never quite achieved the renown of Dante’s bigger hits. Perhaps Matinee is a little more niche than the monster-madness of Gremlins, since it celebrates Dante’s love of B-Movies more directly with parodic recreations rather than era-adjusted references. Matinee is a valentine not only to movies but to the cinema-going experience itself and it is also a nostalgia piece, beautifully recreating 1962 Florida during the Cuban Missile Crisis, revelling in exaggeratedly colourful period detail and offering a similarly simplistic but tonally appropriate view of the sense of fear hanging over those expecting a nuclear explosion at any time. Into this emotionally shaken fray steps John Goodman’s opportunistic film producer Lawrence Woolsey, a peddler of low-quality horror schlock, the popularity of which he feels can only be enhanced by the prevailing mood of terror. Regular cinema-goer Gene and his little brother Dennis are certainly excited by the prospect of the forthcoming attraction ‘Mant!’ (‘Half man… Half ant… ALL TERROR!!!’) and Woolsey knows just how to whip up publicity-winning controversy in the town to ensure a packed house for the premiere.

Matinee is presented in two distinct acts, with the first half of the film building up to the screening of ‘Mant!’ during which a mixture of emotional tensions come to a head. Dante’s handling of the two halves is an example of the director at his best. During the first half, he very much implicates the audience in the hype surrounding Woolsey’s film so that we feel as excited for what’s to come as the characters do as we watch Woolsey turn the cinema into a tricked-up house of booby traps, from tingling shockers inside the seats to costumed actors running up and down the aisles. There’s a lush, upbeat feel to this first half which ensures impatience never takes over and Dante uses this to establish the range of relationships and characters that make the film more than just an amusing bag of tricks. The characters are thinly drawn but easily understandable and this feels entirely appropriate, as if some of Woolsey’s B-Movie cheapness has seeped into real life. Politically, the film is happy to sit on the fence, depicting those for and against nuclear armament as equally goofy stereotypes and refusing to moralise over Woolsey’s exploitation of the climate of fear, offering a handful of attitudes for us to choose from but never pushing one over the other. 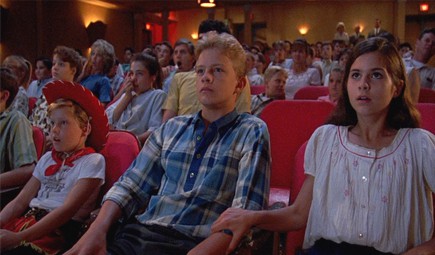 Lawrence Woolsey is the kind of role John Goodman could play in his sleep but there’s no hint of somnambulism in his winningly roguish performance which makes him a charming central presence who, while opportunistic, truly believes in his work as soothing escapism, even if his oft-spoken rationalisation that his films’ happy endings reassure people that everything will be all right in real life conflicts with the climactic trick he has up his sleeve. As his dry-witted girlfriend, Cathy Moriarty has a nice range of deadpan one-liners to undermine Woolsey when he is at his most pompous. Dante populates the rest of his adult cast with regular collaborators and genuine stars of B-Movies, including Dick Miller who falls into both categories, having appeared in every film Dante has ever made. In the roles of the kids, Dante’s young actors are fine if rarely remarkable, while James Villemaire’s role as a poetry-spouting thug provides some of the film’s most jarring laughs but sadly falls victim to underwriting when his presence is drowned out by the convergence of a barrage of plot threads in the second half.

But Matinee is not a film that lives and dies by its performances and Goodman’s stabilising central turn is more than enough to carry the film from an acting point of view. The arrival of act 2 is where the fireworks start to go off and, thanks to the measured pace of the first half, the audience is emotionally involved enough with the story while also feeling excited from essentially being a part of the trailer buzz for ‘Mant!’ When it arrives, ‘Mant!’ does not disappoint. This black and white film-within-a-film was the first footage Dante shot for Matinee and its beautiful, hilarious recreation of bad B-Movies plays throughout the second half, with the evermore hysterical events in the cinema intercut with the hammy hysterics on screen. The script for Matinee was written by Charles S. Haas who also wrote Gremlins 2 and there is something of that film’s high-energy screwball antics evident in Matinee’s second act. Small plot-strands converge, from Robert Picardo’s theatre manager going into meltdown over a perceived apocalypse to the romantic entanglements of a jealous boyfriend in an ant costume and the slow deterioration of a rickety balcony, creating a pulsating energy that skirts the edge of ridiculousness in the classic Dante fashion. 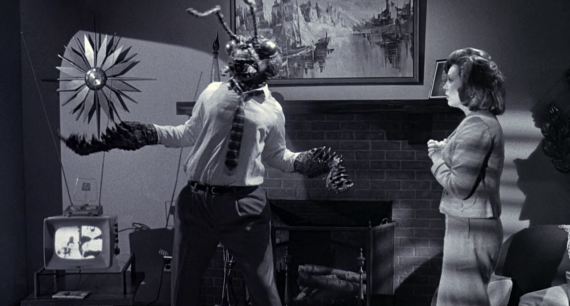 As Matinee ends with a serene final moment, so viewers may feel slightly emotionally short-changed, given that the result of the 90 minutes is a set of characters whose situations have changed but whose attitudes and personalities remain largely unaltered. But therein lies Matinee’s unique charm and the lack of a hokey moral or eleventh hour Road to Damascus moment is actually refreshing. The final dialogue between Goodman and Moriarty implies a minutely altered outlook but there’s no implication that Woolsey feels any shame for his manipulations or, indeed, that he should do. While a lesser filmmaker would have pushed for a script in which good and evil is more clear-cut and obvious moral malfunctions are ironed out through experience, Dante should receive much kudos for presenting audiences with a fiercely entertaining modern B-Movie in which the only human transformation we see is Man into Ant!

Matinee is released by Arrow Video on Dual Format DVD and Blu-ray on Monday 12th September 2016. Extras are as follows:

– Bit Players – newly edited interviews with Joe Dante and selected cast and crew members focusing on Dante’s regular group of collaborators.
– Paranoia in Ant Vision – A discussion with Dante about the making of the film
– Vintage Making of featurette – A great, French-produced half-hour discussion with Dante on the making of Matinee which trumps most of the newly constructed extras on this release.
– Mant! – The real jewel of the extras is this full fifteen minute version of all the footage shot for ‘Mant!’ which can now be watched as an uninterrupted standalone piece. Also included is a great trailer for the film-within-a-film and an introduction by Dante, which disappointingly consists of snippets of the same vintage making of featurette included elsewhere on the disc.
-Rare on-set footage – sourced from Dante’s personal archives, this rare material gives an enjoyably intimate glimpse of life on set.
– Deleted and extended scenes – a short two and a half minute collection of unused material.
– Original theatrical trailer
-Reversible sleeve featuring original and newly commissioned artwork