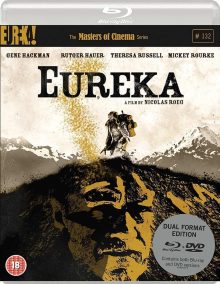 Opening with a fist fight on a mountain top, between two gold prospectors, the film becomes rather surreal when one of the brawlers, Jack McCann (Gene Hackman), storms off into the blizzard and ends up at a nearby abandoned mining town. After witnessing another unfortunate gold prospector blow his own head off Jack flees the sickening town to finally stagger into a brothel in the woods where the establishment’s madam seems to know him, although she calls him Johnny. She also sees something special in him and, just like a chunk of meteorite that he has found, she believes he will rise in importance meteorically.

The next day he heads off into the wilderness and later falls into a cave where he discovers a vein of gold-rich ore and unleashes a torrent of golden water – perhaps. No ‘golden shower’ jokes here please! He returns to the brothel to find the madam, Freida, is dying and, as he cradles her in his arms we fast forward to the present time (well, toward the end of World War II) and to him reminiscing about his earlier exploits to his gorgeous daughter, Tracey (Theresa Russell). 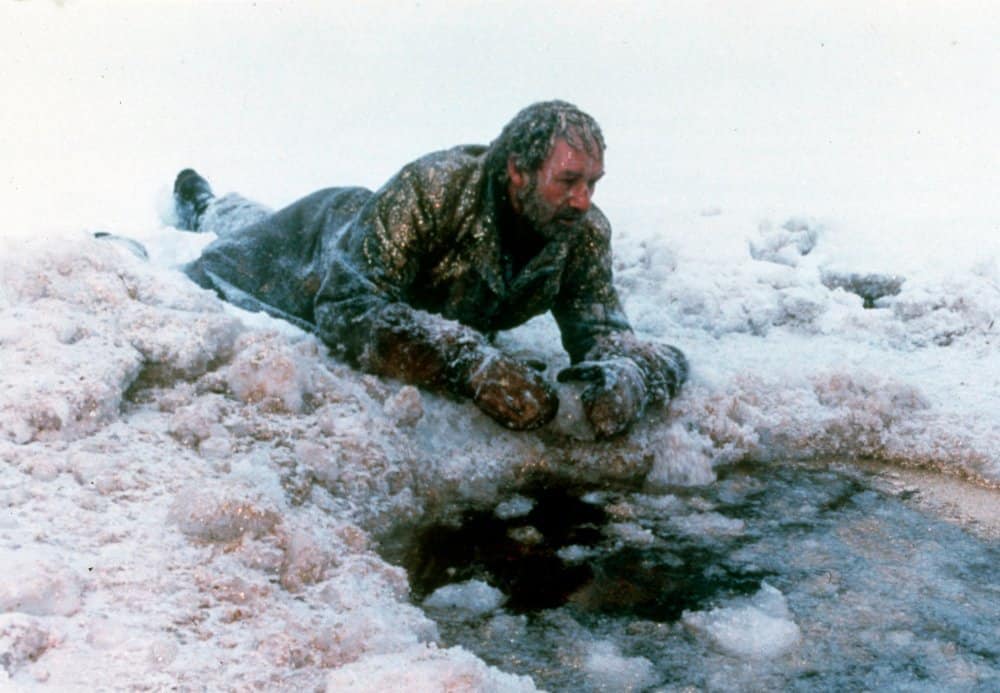 We then discover that Jack, although now rich beyond his wildest dreams, is not a happy man. He might live in a lovely villa (named Eureka), on his own tropical island, with his wife and servants, but he struggles to connect with his family and hates his daughter’s betrothed. The only person he seems to half trust is his business partner, Charlie, but even Charlie is kept at arm’s length and he won’t let him do much business because he doesn’t see the point anymore.

As the film moves all too slowly toward its fiery conclusion we get to meet all the different people who grow to wanting to see Jack dead for one reason or another. And since this was based on a true story we get to see a dramatized reconstruction of the time leading up to Jack’s grisly murder; killed by firstly being tarred and feathered, then immolated, and finally being decapitated. A trail is brought to bear against the shady son in law, Claude (Rutger Hauer) – who has managed to turn Jack’s only child against him – and whom Jack had threatened to kill in return. As the court case proceeds it becomes clear that although Claude had the motivation to kill his father in law he probably didn’t actually murder Jack – or did he…? 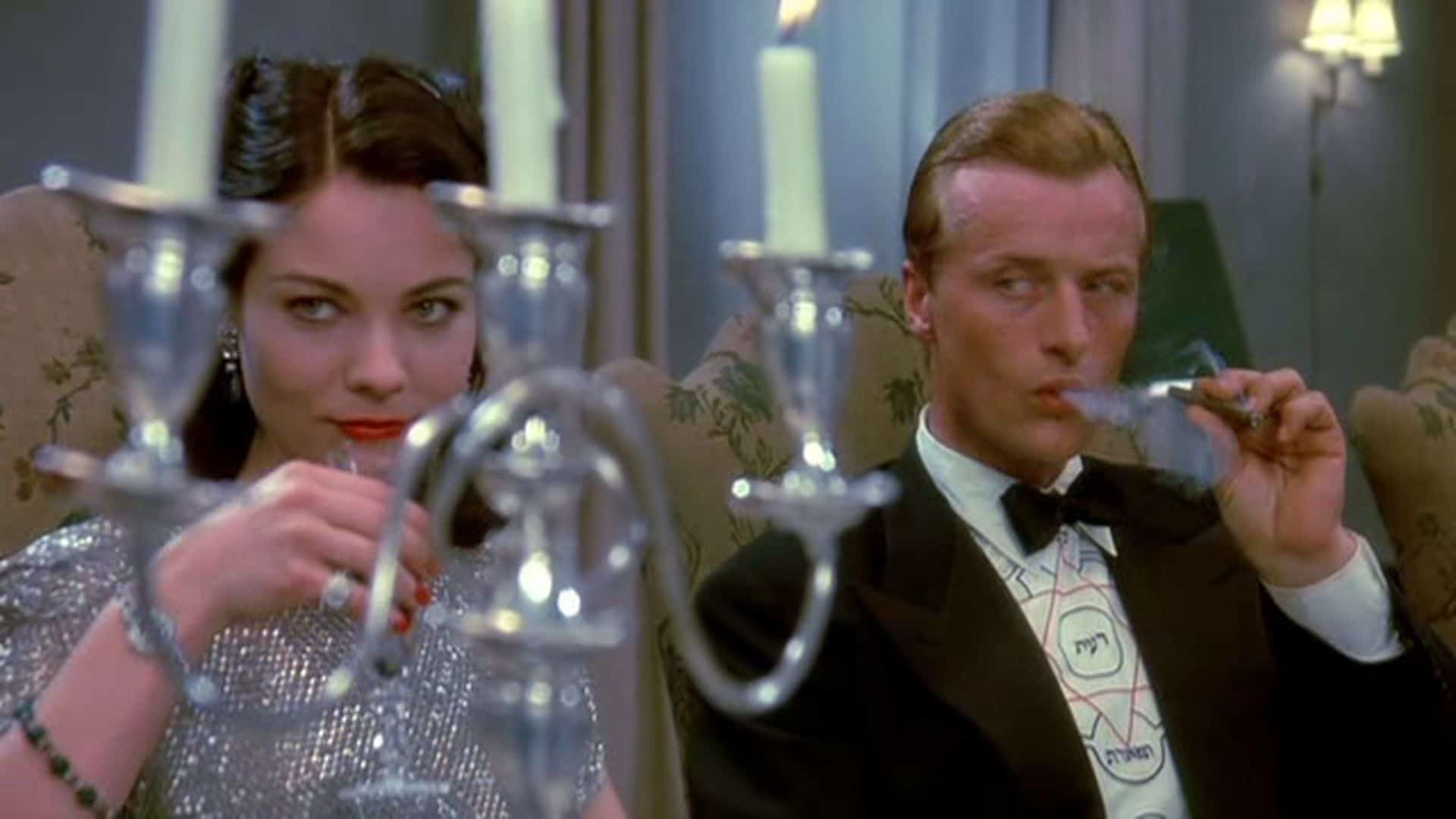 Eureka is most certainly a Nicolas Roeg film – it’s very stylish, very deep, but also frustratingly pretentious and overly art-house. It’s a bit of a tough watch too, being full of self-absorbed characters that rarely have any positive traits. In fact the person who comes out of it best is probably Jack’s poor put-upon wife whose alcoholism is mainly due to the lack of love that Jack bestows on her, or doesn’t as the case may be.

While there’s a lot of excellent acting on display I felt that they were let down in some places by some overly theatrical and melodramatic dialogue that didn’t sit well with me. However, the characters themselves are interesting and would fit nicely into any Agatha Christie murder – mystery novel. Jack himself is an enigma who places much stock in gold and wealth and yet values nothing. As he says at one point: ‘Once I had it all, now I just have everything.’

The visuals are lush, but at times over the top, particularly in the cave-set sequence and Jack’s discovery of the gold seam. This sequence is full of nicely inventive shots, but was a bit too over-the-top for me. However, to be fair, Roeg knows how to shoot his set-pieces and mostly doesn’t disappoint here. I, in particular, enjoyed the voodoo ceremony with its chaotic visuals set to a chaotic musical beat. In fact writer Mayersberg sees the film as an occult film; meaning that you need to pay attention to the hidden elements within it to truly understand it – not just soak up all the surface flesh and blood.

Although I have my misgivings about the film it certainly stayed in my mind for days afterwards and I realised that I’d actually enjoyed it more than I’d originally thought I had. I think, perhaps, that I’ll need to revisit it at some point… 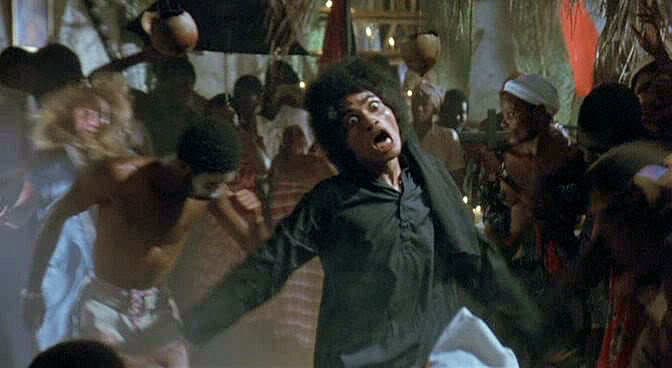 Summing up I’d describe it as a thinking man’s murder mystery, especially if that man (or woman), probably called Rupert or Robin, tends to frequent the wine bars that are often attached to film theatres aimed at the chattering middle classes. Not that there’s anything wrong with that, I hasten to add! Plus if you want to see very young versions of both Joe Pesci and Mickey Rourke then the film is worth a gander for that alone, as here they are playing a gangster (no surprise there then) and a lawyer, respectively.

Weirdest accent: Rutger Hauer – Is that a French accent he’s trying to perform?

Eureka Entertainment is, somewhat aptly, distributing Eureka on DVD and Blu-ray. There are a good bunch of extras on the disc which include:

–    An interview with producer Jeremy Thomas (13.5 mins) where he talks about the story being based on a real-life murder case in the Bahamas, about the various locations used (the court room, for instance, was shot at Twickenham Studios and the cave sequence at Elstree), about the fact that the brothel madam got frostbite on the location shoot, and regarding the fact that the preview screening went badly.

–    An interview with writer Paul Mayersberg (53 mins) who goes into more detail about the case behind the story, then explains how the working title of the film was ‘Murder, mystery’, and shares his own thoughts about what motivates the characters from the story. Apparently the title ‘Eureka’ came from Edgar Allen Poe’s last story of the same name.

–   An interview with Editor Tony Lawson (13 mins). We find out that he also worked with Nicolas on Bad Timing, but wasn’t on the shoot, and also on Performance, and that he had a close working relationship with Mr Roeg who, he felt, was always looking for the deeper meaning in just about everything. 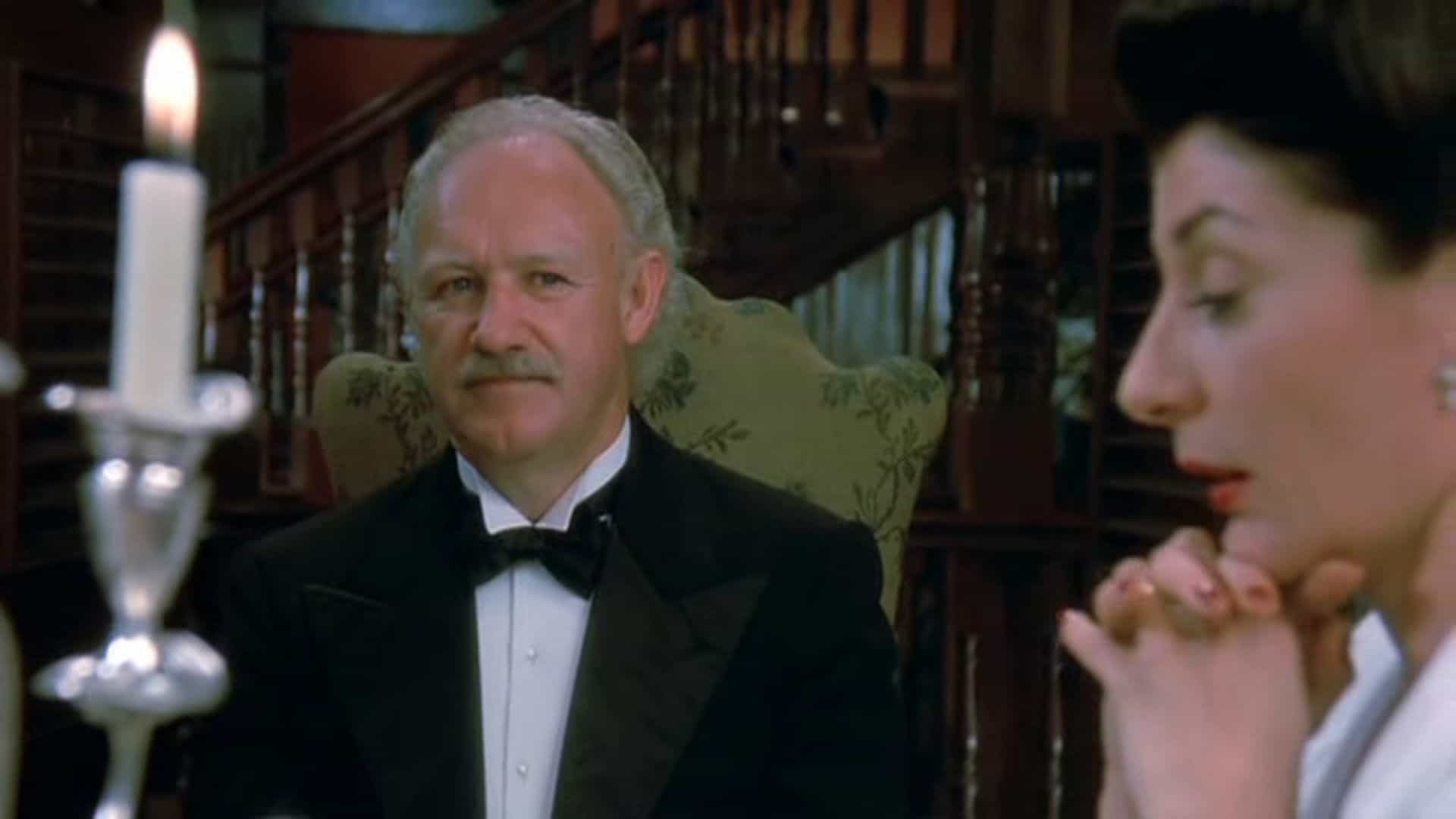