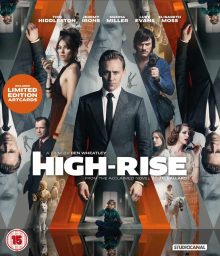 Ben Wheatley has become a big name in British film over the last 7 years, although his films are often quite divisive. For me, he’s a director that started well, peaked early, then has steadily gone down hill. I enjoyed Down Terrace quite a lot, even though it has the sort of rough edges a lot of low budget debuts share. Kill List was where he really blew me away though, making him my favourite up-and-coming director. However, his follow-up Sightseers was a little disappointing. It wasn’t bad, so I remained confident in Wheatley’s talents, but then A Field in England was released. I didn’t care for it at all. It felt a bit like a student film; full of nice visual ideas, but pretentious, monotonous and a bit cheap-looking. So, from then I became quite cautious about the director’s work. Trailers for his latest, High-Rise, were fantastic though, so I didn’t want to miss it. Reviews surrounding its cinema release were mixed, but not everyone liked Kill List, so I was more than keen to take the plunge when I was offered a chance to review High-Rise.

Based on a novel of the same name by J.G. Ballard, High-Rise is set in London in the late 70’s, where architect Royal (Jeremy Irons) has designed a group of high-rise flats. Not only are they designed to look unique (grouped like the fingers of an open hand, with a pond in the palm), Royal conducts a social experiment within them. He brings together all classes to live together, keeping the working/lower classes on the lower floors, with the middle classes further up and the upper near the top, with Royal himself living in the penthouse of the particular flat where the film is set. 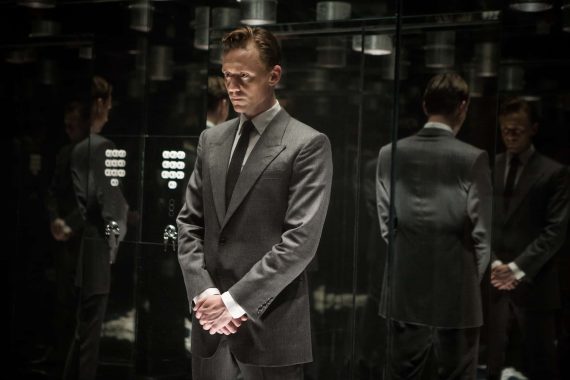 We enter the flat with Laing (Tom Hiddleston), a new tenant. He’s a doctor (a brain surgeon or similar), so lives somewhere in the middle. He’s soon plunged into the world of endless parties and debauchery going on in the tower block, guided by his upstairs neighbour Charlotte (Sienna Miller), one of the lower level mothers (families tend to live near the bottom), Helen (Elisabeth Moss) and her husband Wilder (Luke Evans). The fun soon turns into a nightmare though once the lower classes start to rebel (they aren’t provided the same services as those above) and the suicide of an upper level resident tips tensions over the edge.

I guess I should go straight ahead and answer the question of whether High-Rise reinstated my faith in Wheatley as a director. The simple answer is no. The prime reason I didn’t like the film was that I couldn’t find anything to latch on to. The film is so cold and the characters have little substance. Laing is supposed to be the audience’s point of reference, but other than some brief early mentions of his sister dying, leaving him the sole member of his family, it’s hard to see why he’s there and why we should care. Like everyone else in the film, he’s a bit of a blank slate. It’s nothing to do with the performance – Hiddleston does a great job with what he has, but his character didn’t interest me at all. 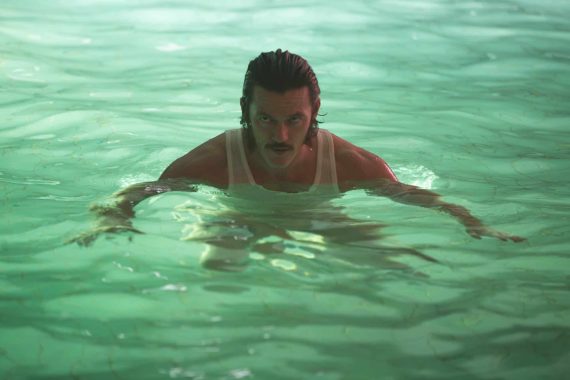 Possibly more distancing than the character though was the editing. There are quite a lot of characters and for a huge proportion of the film we rapidly intercut between events in different areas of the building (usually upstairs and downstairs). There was too much of this for me and I kept wishing the film would settle on one scene to let it breathe. The constant jumping around, not helped by the lack of clear lead-ins to many of the scenes, means it all feels like a big mess. There’s always a lot going on, on screen, but at the same time not much changes from a narrative perspective, so it feels like we’re just being bombarded with a series of images, which to me smacks of pretension.

The imagery is undoubtedly impressive though. The film is stylishly shot and the production design is wonderful, delivering a warped spin on 70’s cool as well as murky post-apocalyptic filth as the film goes on. I loved the music too, Clint Mansell’s score is bold and striking, strangely featuring various covers of Abba’s ‘SOS’.

The film’s slick style wasn’t enough to keep me engaged though. As the film went on I simply gave up caring and started to clock watch. There is some intellectual meat in the story of course, but I found the symbolism and metaphors a bit too blunt and not all that original, so it didn’t feel as smart as it likely wanted to be. Instead it was a glossy, but messy and soulless slog. Wheatley has a long way to go to get me back on his side now.

High Rise is out on 11th July on VOD in the UK and on DVD and Blu-Ray on 18th July, released by Studiocanal. I watched the Blu-Ray version which looks and sounds great.

There are tonnes of special features included too. On the Blu-Ray these include:

The DVD only includes the top two features and interviews with Tom Hiddleston, Sienna Miller, Luke Evans and Jeremy Irons.

I haven’t had chance to listen to the commentary yet, although I’m keen to (even though I wasn’t a fan of the film). I’ve heard one of Wheatley’s previous commentaries (on Down Terrace) and enjoyed it a lot. As for the interviews, it’s impressive to see so many included (and some are fairly lengthy), but they’re a little hit and miss. Interviews with the actors get quite repetitive, with some uninspiring questions (‘what was it like working with Ben Wheatley?’ etc.) The crew interviews are interesting though, with a nice range of people spoken to (including the second unit director and assistant director), giving you a nice overview of what goes into the production of a film. It’s annoying that there isn’t a ‘play all’ option though. The JG Ballard featurette is decent enough, but very short at a mere 4 minutes.