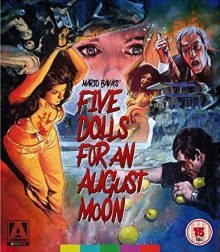 Information surrounding this release describes Five Dolls for an August Moon as an obscure lost giallo. This may be a selling point for some, for others a reason to avoid. Giallo is a very wide ranging genre of Italian film from the 60s, 70s and early 80s, and in my experience they can be very much hit or miss. Whilst often stylistically intoxicating, the actual narrative content can be disjointed, shallow, non sensical and banal.

Five Dolls For an August Moon is lurid, colourful, and hip to the late 60s styles of pop art psychedelia. The opening scene is of a woman walking alone in the twilight setting of sand dunes backed by the soft focus glow of a pink sky and a red setting sun. We later discover this is the solitary character Isabel (Justine Gall), an inhabitant of the island where the story takes place. In contrast to this atmospheric scene the film cuts to an interior party scene, film composer Piero Umilani’s soundtrack pumps out an organ driven funk rock banger, and we are privy to a decadent house party. Cameras zoom in and out, hipsters groove the night away in far out threads, and Pook (Edwige Fenech) performs a druggy striptease. Add to this a mock sado-masochistic pagan ritual involving Jacques (Mauro Bosco) the butler being stabbed in the dark, and we’re talking The Rolling Stones Sympathy for the Devil as opposed to The Beatles All You Need is Love. 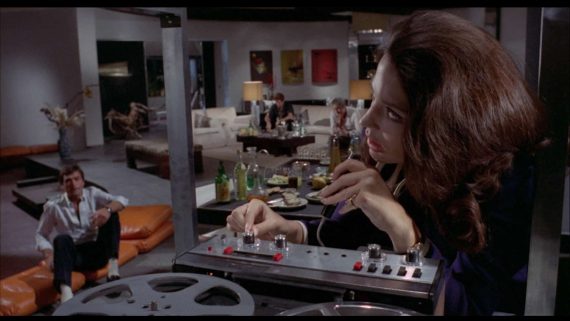 Amongst all the bold imagery, a plot unfolds, involving a scientist Gerry (William Berger) who has a formula for industrial resin that three rich industrialists want to own exclusively at any cost. There are also the three wives of these industrialists, Gerry’s sultry wife Trudy (Iva Von Furstenberg) and the butler Jacques. Un-suprisingly, the murders begin, and characters are subject to a series of mutilations and horrific deaths. The obvious comparison would be to an Agatha Christie novel, laced with a strong dose of Lysergic acid diethyl amide (LSD).

Possible themes addressed by the film; science exploited by industry, or perhaps in the image of the moon an allusion to the dark movement of feminine power. Five Dolls For an August Moon looks amazing and is visually stunning, and the soundtrack is sumptuous. As you would expect from a thriller, there’s a good twist at the end also. All in all this is a fun film, worth a watch, especially if you’re a fan of the cult director Mario Bava.

The disk also includes an extra in the form of an hour long  documentary narrated by Mark Kermode, which includes contributions from Mario Bava’s colleagues, family, as well as directors such as John Carpenter and Tim Burton.