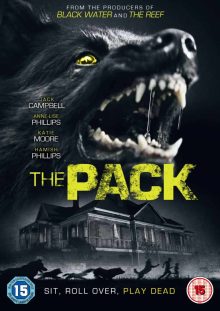 Gripping and fierce yarn about a pack of savage wild dogs that go on the rampage in the Australian countryside. Setting their sights on a farmer and his family at their isolated holdings, the pack terrorize the family over one violent night as they stalk, intimidate and attack the family and anyone who happens across the farm. The family, with no other option, unite in an effort to fight back and reclaim their home retaliating against the ever swarming pack of vicious dogs.

Short, simple and scary The Pack uses its single location, limited characters, isolated setting and threatening foe to create an often brutal and eerie tale of animals run amok. The pack are silent, swift and oh so sneaky, slipping through the wooded countryside with stealth and ease meaning at times they come across as an almost supernatural presence. The filmmakers wisely don’t try to explain the dogs reasoning for attacking making the vicious canines seem that ever more threatening. We the viewer are never sure of their numbers either, meaning a thick feeling of disquiet and dread coats the film giving the flick its spooky vibe. Tension is often expertly mounted, the attacks brutal and the threat from the savage beasts ever present.  In fact, the film often works its horror elements best when you simply see the dogs zipping through the trees, their eyes glowing in the dark, or entering a shot subtly in the back ground.

Likewise, the surroundings are often shot and captured in a way to make them seem eerie and almost as fraught with danger as the dogs themselves. The ambient noise helps to give the feeling of isolation as the family really must face this horror on their own. All the principals are great as well, coming across as real people and a real family rather than horror stereotypes and make for a nice change from the usual bunch of teenagers being terrorized. While the tension is thick and the horror slow build, gore fans will still be satisfied by the bloody attacks meaning the makers know when to deliver the goods when needed.

For most of its short running time, The Pack is an effective horror film. The filmmakers perhaps do play things a little too subtle on occasion (meaning some scenes drag on a bit and build tension way past the point they need to!) and the abrupt ending (with the unwisely chosen and mood shattering song!) means proceedings reach a somewhat unsatisfying climax. However, none of these minor downsides derail what is a well made chiller that effectively makes a pack of berserk wild dogs seem very, very scary.

The Pack is out now from Arrow Films and comes with the obligatory making of as an extra.