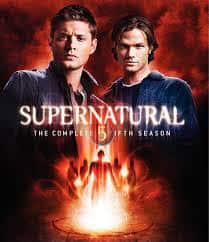 Well well well season five already, this programme really is becoming rather addictive.  It is rare that I find a show that I want to watch continually yet this is one that I can not stop watching.

Let’s start off with our general rundown of what’s going on, then I will go on to my selected episode which this season is Changing Channels, the eighth in the season and in my eyes one of the funniest episodes I have seen yet.  So what will the Winchester boys have to face this time round after the spectacular season finale? First up we have the obvious one, Lucifer. Also we have the four horsemen of the apocalypse, various gods from Greek, Roman and Hindu beliefs, they meet a cupid, the Trickster returns and they even have to survive inside a Japanese game show called NutCracker (it is exactly what it sounds like). All of these things combined create a suspenseful and entertaining season of true suspense that will have you itching for the next episode.

Okay let’s talk about the wonderful, comedic episode with a profound message within that is Changing Channels. Whilst the boys are working a case in Ohio they cross paths once again with the Trickster who sends them into a TV land where they are told that the only way to get out is to survive 24 hours. So what kind of shows will they have to survive? each of them is a parody of popular tv shows including Dr Sexy (Grey’s Anatomy), a spoof of C.S.I., a Japanese gameshow where if you do not get the answer right you get hit in the nuts with a large ball (I know it is immature but I couldn’t help but laugh at this scene) and even an advert for a medication called Herpexia in which Jared Padalecki declares he has genital herpes. This is an episode that shows it is okay to use large amounts of comedy whilst trying to get a very serious point across to the audience. The perfect person to do that was the Trickster as played by Richard Speight Jr (Band Of Brothers, Jericho, Speed 2: Cruise Control) as although he was only in a few episodes, he truly creates a character that to begin with you really hate but as time progresses I personally think that he is one of my favorite characters.

This was a superb series that is well worth watching and as always is available in the season 1-9 blu ray boxset. I recommend picking it up and enjoying this superb programme.