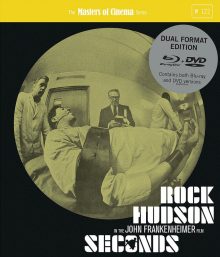 In my review of The Train earlier this year, I talked of my appreciation of John Frankenheimer and belief that he doesn’t quite get the respect he deserves. Back in the early 60’s he could do no wrong though. He had a run of four critical and commercial successes with Birdman of Alcatraz, The Manchurian Candidate, Seven Days in May and The Train. This was followed up by the spiritual successor to the middle two titles, Seconds, creating an unofficial ‘paranoia trilogy’. A dark, unusual and quite challenging film, it wasn’t nearly as successful as Frankenheimer’s previous work, which may explain why its follow up was the more spectacular crowd-pleaser (and his first film in colour), Grand Prix. Over time, Seconds has been better appreciated though and Eureka have deemed it worthy of addition to their superlative Masters of Cinema series. I got hold of a copy to see how it stands up today.

Seconds finds the middle aged banker Arthur Hamilton (John Randolph) unhappy with his life. A mysterious phone call from his supposedly dead friend Charlie (Murray Hamilton) offers a chance for improvement though. Charlie leads Arthur towards a shady organisation who promise their customers a fresh start by faking their deaths and setting them up with a new and sought-after lifestyle, with a new face to go with it (achieved through extreme plastic surgery). Although unsure of the procedure at first, Arthur is talked (or pretty much bullied) into it. He becomes Antiochus Wilson, a West Coast artist with the face of Rock Hudson. At first this new identity seems idyllic, bringing romance in the form of the free spirited Nora Marcus (Salome Jens) who helps loosen up the uptight former banker. However, as time goes on, Arthur/Antiochus finds that all is not as it seems and he learns to appreciate the true value of life so wants to re-assume his original identity. The question is, will the organisation allow it? 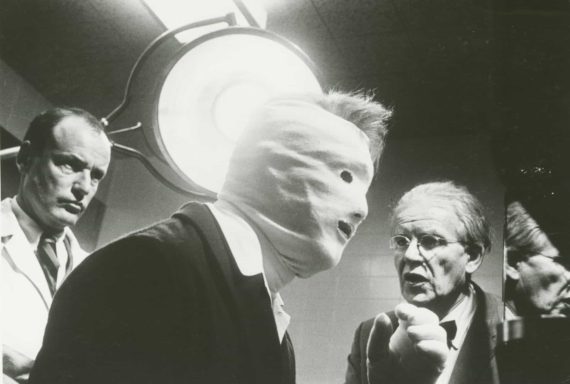 I hadn’t heard of this before being offered a screener to be honest, but the director and concept really appealed to me and I must say I’m very happy that I went for it, because this is a great film. Frankenheimer, DOP James Wong Howe and editors David Newhouse and Ferris Webster create a terrifyingly unsettling sense of paranoia, particularly in the first half. Opening up in a disorientating maze which our protagonist is forced through, very much like David Fincher’s The Game, the unease is heightened by some unusual black and white cinematography, frequently utilising warped wide angled lenses and an expanded depth of field. The editing is occasionally quite fractured and edgy too, making for an uncomfortable watch.

This sense of unease is so powerful it’s actually quite frightening at times and you wouldn’t be far wrong to call it a horror film. The ending in particular is one of the most shocking and horrifying denouements I’ve ever seen.

There’s poignancy too though in a couple of scenes where Arthur/Antiochus confronts his life’s failings, in one scene actually approaching his wife under his newly assumed identity. This is a heartbreaking scene and, according to Frankenheimer in the film’s commentary, a scene with Arthur’s daughter was shot too, but cut out. The director says he felt it was a shame it was lost and I feel it would have added something too. Nevertheless, what remains is still very powerful.

Helping the drama and paranoia gel is an outstanding central performance by Hudson. In an interview with Kim Newman included on the disc, the critic believes that Hudson’s presence in the film may have hurt its box office potential. Known for playing romantic leads or manly heroes, this wasn’t a typical role so his fans might have been put off and sci-fi thriller fans might have not fancied watching a Rock Hudson vehicle either. However, regardless of public opinion at the time, he does a great job of depicting a troubled man trapped in someone else’s life. That’s no mean feat in my humble opinion.

The mid-section may sag slightly as Arthur/Antiochus experiences a rather 60’s view of being ‘free’, but overall this is a strikingly unconventional and expertly crafted paranoid thriller that truly gets under your skin and stays there long after the film has stopped running.

Seconds is out now on dual format Blu-Ray and DVD in the UK, released by Eureka as part of their Masters of Cinema series. I saw the Blu-Ray version and the picture and audio quality is great as is to be expected from the label.

You get a small handful of decent special features too. There are no less than two audio commentaries: one by director John Frankenheimer, and one by film scholar Adrian Martin. I haven’t listened to the latter yet, but I put on the Frankenheimer track and enjoyed it immensely, which is a surprise as I found his commentary on The Train quite disappointing. There’s also a video interview with novelist and critic Kim Newman. This is a pleasure to watch too as he’s passionate about the film and talks of its qualities and the films it influenced (including The Game, which I picked up on myself as I watched).

And as with all Masters of Cinema releases, you get a booklet in with the package, which is as informative as always.