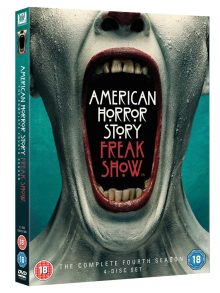 The first episode of the first series of American Horror Story made me so scared I had to turn it off and wait for my then boyfriend to get home to watch it with me. S1 was full of excellent scares but ended with a whisper instead of a bang; I don’t think the series has ever quite reached the same heights but it does throw up some interesting settings but alas this show now in its 5th season has always been a bit hit and miss in this way; some episodes are better than others and some series are better than others. Rather worryingly with AHS: Freak Show it is at its worst – the law of diminishing returns is in full swing.

Freak Show is S4 – the setting is a travelling freak show/circus that arrives in Smalltown, USA and brings with it mayhem, murder and a special service for the lonely housewife.

The usual rolling cast returns which is one of the joys of this series. Jessica Lange plays Elsa Mars the ringleader of the troupe; with dreams of stardom still in her sights she gathers her family of freaks and swings between good mother/bad mother. The first time Lange sings a cabaret version of a pop song – Bowie’s ‘Life on Mars’ (geddit?) – it is amazing and breath taking; the 3rd time you see something similar you’ve sort of had enough, this trope is seriously over milked. 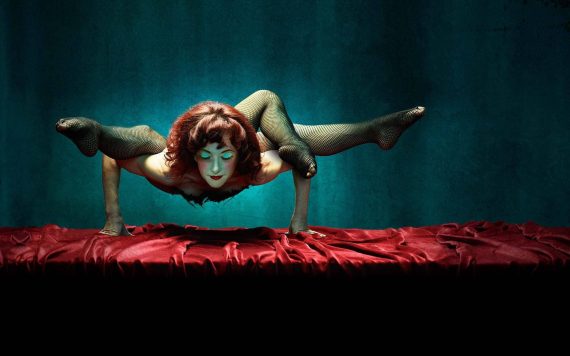 Sarah Poulson plays Siamese twins Bette and Dot who share more than just a body they also have a telepathic connection. Poulson is a great actor, always outstanding in AHS but like many others given not enough to do in this season. Evan Peters plays lobster boy Jimmy Darling, who in between servicing the local bored housewives with his unique hands is looking to prove himself and grow up. Denis O’Hare is on form as a shady con-man who wants to take advantage of the freaks in a murderous manner. There is a very scary clown and an even scarier local rich kid to contend with; not enough of these 2 characters was my feeling. The bearded lady is a great turn from Kathy Bates but like the aforementioned clown there isn’t enough of her either. Naomi Grossman is great as Pepper (the ‘pinhead’), who we first saw in AHS; Asylum – one of the better AHS seasons – and here we get her back story showing how she ends up in the institution in her later years. This is one of the more interesting threads in this season but they are so few and far between I was at times a little bored with what was going on.

AHS: Freak Show like the preceding season is visually magnificent, with some good ideas and standalone pieces this is worth a watch for fans but as usual with AHS the ending never quite lives up to your expectations. Worse than that there are more ‘miss’ episodes than hits in S4 and the expectations you have from the set up – a freak show! Man that is going to be gooooood – are never met to the full. I’m not sure what holds back AHS as a whole; it so rarely wants to go the full hog when it comes to the endings and veers worryingly close to sentimentalism when it should be going for more scares. However, it is still great TV in the main and filling a niche that no one else is going anywhere near. Plus the acting is mostly in the outstanding range and Jessica Lange is a lush treat in every scene so if you liked the other series you should watch this.

American Horror Story: Freak Show is out now on DVD and Blu-Ray in the UK, released by 20th Century Fox.