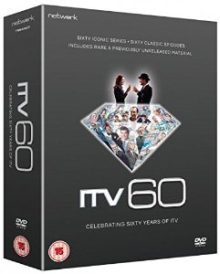 I can’t believe it’s been 60 years of itv already. How best to celebrate it than to release a twelve disc boxset of some of their best programming? That’s what ITV and NETWORK have done resulting in approximately two thousand four hundred  minutes of classic gold ranging from The Bill to TISWAS.

How is it laid out? Is this the kind of boxset for you? Well i will do my best to this question. First one is what is it? This is a collection of twelve discs themed in such a way that each of them is a nights worth of entertainment for you. I would like to give you an example so I will reference disk 06 for you. When you start the disc you get your menu option which sports the classic blue and white background and the image from the box. From there you have six options which are play all or go straight to one of the five programmes available.

I started my evening sat on the sofa ready to review this bizarre concept, and as I hit play all was met with ITV’s Magpie, which was set out to be their competitor to the BBC’s Blue Peter. The episode in question originally aired on the 26th of november 1976. I am not ashamed to admit that although I had heard of Magpie, which had ceased production eight years before I was born I had never seen it. Next up was what to me was a very strange but entertaining talk show Called Shut That Door starring Larry Grayson. I have to admit that I enjoyed it and found myself laughing. It stuck me as the kind of thing that many talk shows today try to be but fall short from. At this point I was thinking maybe this is quite a nice way to spend an evening. Can it really improve after that heartwarming glimpse into the past? Then the next programme started. Wow. One of my favorite  classic sci-fi programmes seconded only by Buck Rogers in my eyes. It was an episode of the wonderful Space 1999. I found myself enjoying this little romp through old school sci-fi immensely with its cheesy costumes all the way to the overacting and special effects. as soon as i heard the bass of the theme tune I found myself sent back and it felt like i was watching back then and should have been doing so on an old crt rather than an lcd. It transferred very well to dvd losing none of what made it so special. Next up was an older programme that I must confess to having never heard of. The 1960’s crime drama No Hiding place. What surprised me was how although this programme was in black and white it fit well with the evenings viewing and even with the grainy picture I found that after a while it was barely noticeable as i was thrown into the story of  Detective Chief Superintendent Tom Lockhart. As this programme ended I reached the final programme of the disc and my nights viewing. How better to end the night than with a classic episode of The Sweeney. The first proper police drama which is another one that the moment you hear the tune you know that you are in for 50 mins of real drama.

The main question is whether this collection of discs is worth the RRP of £77.99p? In my eye’s it is worth every penny as you can watch different disc each time for an enjoyable evening of viewing.  It will be available online at networkonair.com from october 26th and from selected retailers from the 23rd of november, just in time for christmas as this is the perfect present for and classic telly addict.