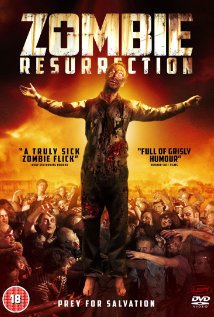 Award-winning director and self-proclaimed reformed nerd Andy Phelps and non-award winning Doctor Jake Hawkins packed in work to make a zombie flick, well doesn’t everyone want to, and it’s a good ‘un. Hey lets go…A van hurtles through the woods, a gun man’s on the loose, its killing time, and a girl needs saving but something is rotten and won’t die.

Infection day 458 and a rag-tag group of survivors stumble through a post zombie apocalypse landscape, so lets meet the team. This time the zombies are falling apart, Mac (Jim Sweeney) shows off and rips a zombie spine out, just ‘cos he can. Major Gibson (Joe Rainbow) is under the delusion that he is in charge, but not for long as this buffoon gets his foot stuck in a man trap, bitten by a zombie and his foot chopped off, in quick succession. Beaumont (Danny Brown) and daughter, Becca (Rachel Nottingham), want in on the zombie action; the zombies are pretty slow so dad knocks a zombie’s head off with his special zombie killing golf club. Becca disturbingly just wants to know “Can I have your dog-tags? When you’re dead?” Killing Zombies is a noisy business, so you guessed it…the zombies are coming. So what do you do next? Well the answer is obvious, find the creepiest old deserted building possible and break in without thinking too much about why the building has been boarded up from outside. Maybe something was locked in? The mystery starts to unravel as we find out orange suited prisoner Sykes (Eric Colvin) is the doctor responsible for the start of this zombie holocaust. The doctor made a new vaccine and infected the army; it was supposed to be a vaccine against biological warfare, chemical weapons and wars in dangerous places.

Not contented with breaking into a building which has been sealed, the survivors head towards a blood splattered room with a pile of body parts at the door. The sound of moaning increases and they are completely out of luck as they stumble into a room full of fresh zombies. In the centre of the shambling horde stands the messiah zombie, a zombie mutation that can turn a shit sack back to life. One of the unfortunate living dead is touched by the messiah and on coming back to life, is eaten again by the roaming cannibal corpses. The undead throng turn on our gormless heroes, who throw a box of plastic cups at the rampaging multitude as defence, as you may have guessed this is not a great tactic. Sundry zombie skirmishes ensue in which Beaumont is upset when he has broken his favourite golf club. Our lurking zombie hunters think they hear a girl and go to the rescue, armed with a fire extinguisher and mop, reminiscent of the Toxic Avenger, they find a living girl. Meanwhile Gibson has gone mad and morphed into a Golum-Renfield like lunatic. Enter the religious nut Ester (Shamiso Mushambi) who decides the zombie is Jesus Christ returned and touches the inverted messiah only to be turned into a zombie, well what did you expect? In homage, “Night of the Living Dead” hands grasp and contort through hastily blocked doors in a tussle to get to the juicy human morsels within, the motley crew are being picked off one by one.

Our zombie dodgers stumble across a dead girl that has been brought back to life and realise that maybe the undead messiah could be the solution to the apocalypse, the cure, the end of the plague, so they go on a mission to capture the living dead saviour. The diminishing group take another thrashing and Katrina (Jade Colucci) on turned into a zombie has a cross rammed down her throat by Mad Doctor Sykes before we are subjected to a further orgy of gut munching. To add to the pile of sick stuff, mad religious fruitcake, pregnant Esther decides the best plan of action is to stab her unborn baby with a glass shard. Before we can say “The walls hang heavy with a thousand souls destined for eternal damnation “, she has crucified the resurrection zombie. There’s nothing left to do, so Mad Doc Sykes scarpers and we end in “Dawn of the Dead” tribute as the zombie mass press on the glass doors of the building, the glass starts to crack and Doctor Bad readies himself with axe in hand.

Zombie Resurrection was written in 2010 and by 2011 production was started; it was shot in just 24 days by August of that year in the south of England and seems too high quality to fit in the low-budget box. It’s scary with buckets of gore but funny too, packed full of one line funnies, Gandhi (Simon Burbage) must be the sensitive one exclaiming “Have a bit of respect for those living with early onset necrosis.”This is one of the most professional zombie films from England I have seen in a while, it has a dark quirkiness with obviously British wackiness and a great music score. It has its obvious homages to Romero but tries some new and interesting angles with top notch special effects and acting, making this one for your collection.