Andrew Hulme director of Snow in Paradise, his debut feature, took some time out from work in LA to answer some of my questions.

Katy Vans: Hi Andrew, how did you make the move from editing into directing?

Andrew Hulme: I think as an editor who’s been working with directors over a long period of time I’ve watched and learned from them. I always had a desire to make my own films ever since I’d been at Art school but the films I made back then were abstract and experimental with limited appeal.

I guess I was waiting for an opportunity and when I met Martin I realised that here was a story I wanted to tell. I felt compelled to tell it and took it on as a challenge. It was the perfect vehicle for us all in a way. We were all novices and yet with the experience I’d had in the cutting room helped us make the film.

As an editor you are at the heart of the film machine, telling the story. I think I’ve Iearned what works and what doesn’t work in the process. It certainly informed me during the shoot. When you’ve only got 20 days to shoot a film you need to know exactly what you want from every shot. I found I used muscles I never knew I had.

KV: What was it like co-writing with Martin Askew; he also was taking on a role new to him, actor to writer?

AH: Myself and Martin have a really good working relationship. Over a period of time we gained each other’s trust and found we were very productive. It was difficult at first to separate the elements that were purely personal experience but eventually we found the story and then it was easier.

I never wanted to cast Martin in the film as I felt he was too close to the material. It was based on his own life story after all. But through the casting and training of Frederick, Martin worked very closely with him and when we were struggling to find the right actor for the part of Jimmy it suddenly was clear that we already had someone with all the knowledge that that part needed. He was right in front of us. Martin played his own real life antagonist, his alter ego if you like. It adds a strange layer to the film and is somehow right

KV: Tell me about how you got this project off the ground?

AH: With difficulty. We had no help from the UK funding bodies so were forced into thinking laterally about financing the film. We were helped by being accepted into Cinemart, the arthouse film market in Rotterdam where we pitched the project to about 50 people over a period of four days (very intense!). From there we got a sales agent and a few funders then a French distributor came on board and with some private finance and a Kickstarter campaign we got the money together.

What you have to remember about this film though is that it was a very risky venture. Difficult subject matter, quite grim in places, a no name cast, a first time director with no real track record… and on top of that, Muslims as the good guys?

Looking back I can see why we struggled to make it. But nothing worthwhile was ever achieved without risk and hard work. 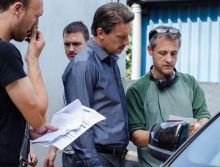 KV: Tell me about your career in the film industry

AH: I started out at the BBC in Leeds as a trainee assistant film editor. My first proper job – excepting a saturday job on the Pick n Mix counter at Woolies.

Editing was what I knew. Everyone at college wanted to be directors or DOPs, the glamour roles. At the time no one thought much about editing. It was this long slow process of cutting film and hanging it in trim bins. Very boring. But what happened was that digital technology arrived in the shape of Avid and Lightworks and the job took on a whole new life of its own. Now its seen as very powerful and cool – you can rewrite and re-invent a film very easily now (assuming you have ideas and some technique of course).

Anyway, I worked my way from TV documentary to film drama and worked for a long time with Paul McGuigan (Acid House, Gangster no1, Lucky Number Slevin). I started to find the subjects and stories I liked as an editor and obviously this led the way to making my own films.

Its been a thirty year dream of mine to make a film and when I met Martin I realised I had all the tools within me to do it. Quite where I found the determination from I don’t know… but something worked.

KV: It’s quite a male centric film, tell me about that

AH: Well quite simply, the main character is a man who comes from a male-centric world and is surrounded by groups of other men and he is aspiring to move up in that world. However he desperately craves love and affection but is involved with a woman in an unhealthy co-dependent drug relationship. When another man shows him the only genuine affection in the film by selflessly putting his arm round him to comfort him I find it very moving. It just so happens that this man sees him as a brother and he’s Islamic. It’s not a coincidence that Dave is drawn to the world of men, because that’s the world he knows.

AH: I have quite a few projects I’m working on. Religion, art and madness. My favourite subjects.

Snow in Paradise is released on 6th February 2015 in the UK, by Curzon.