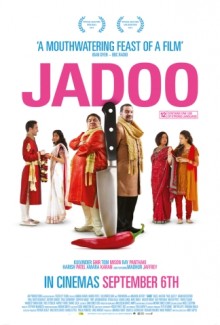 Jadoo is the story of two brothers who fall out to such an extent that they cut up the family recipe book and then start up rival restaurants. A film about love and the love of curry – not a film to watch when you’re hungry.

Raja (Harish Patel) and Jagi (Kulvinder Ghir) Chandana both worked in their family’s Indian restaurant in Leicester until their mother died. Then, for reasons neither will go into, they fell out and took half the family’s cookbook each and set up their own restaurants. Raja, who had always made the starters, got the front half the book, Jagi, who made the main dishes, got the second half.

What this meant was that locals would have a starter in Raja’s restaurant and their main course in Jagi’s. This situation was all set to continue, along with the animosity between them, until Raja’s daughter, Shalini (Amara Karan) announces that she is getting married and that she wants her dad and her uncle to cook at her wedding. 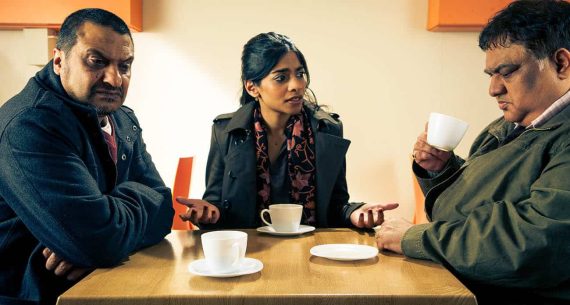 However, even this momentous occasion can’t bring the two together initially. They do finally get together when Shalini persuades the two men to enter a curry cooking competition that is being judged by Madhur Jaffrey, who makes an appearance in the film.

Jadoo is a very enjoyable film. It doesn’t try to do much, but is the now archetypal English film in the vein of Four Weddings, Notting Hill and so on. You could say that this sub-genre of rom-coms is fast becoming as English as our love for eating curry.

Everyone in the film is well cast, but the two leading men are fantastic. They play the sibling rivalry beautifully and the tale is heartwarming. All in Jadoo is a feel-good film that makes for pleasant watching.

Jadoo is out on DVD on February 17th in the UK, released by Metrodome.