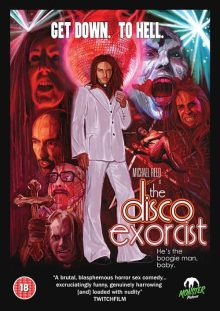 Grindhouse, Quentin Tarantino and Robert Rodriguez’s ode to retro trash, underperformed at the US box office, causing the double bill presentation to get ditched in the UK and other countries by distributors worried the whole concept was flawed or confusing. However, the film/s must have had some fans as ever since its release in 2007 there has been a never-ending stream of B-movies riffing (and occasionally ripping) off old down and dirty pictures from the 70’s and 80’s. Of course, genre films have often looked to the past as their directors try to recapture the thrills of their favourite childhood guilty pleasures, but Grindhouse triggered more blatant referencing. The most clear effect being the ‘dirtying up’ of films to make them look like a real product of the time they are mimicking. Regular readers will know I’m a lover of trashy exploitation movies, so this new wave of retro tributes has been keeping me happy, but the formula is beginning to show cracks beyond the digital damage added to the prints. With apps like Instagram making all of our photos look vintage, the visual ‘un-polishing’ of these Grindhouse followers is getting tired and many of the films forget what made those original B-movies so much fun.

So along comes The Disco Exorcist, the latest sexploitation horror from Richard Griffin, a director I’m not familiar with, but who has been knocking out low budget horror movies from Rhode Island for over 10 years. As you’ve probably guessed from my intro to the review and from the title itself, The Disco Exorcist is a cheeky throwback to the 70’s grindhouse glory days. Rex Romanski (Michael Reed) is hot stuff at his local discotheque, grooving every lady straight to his bedroom. One night he picks up Rita Marie (Ruth Sullivan) and treats her to a special night of sweaty passion. She falls head over heels for him, but the very next night Rex spots his favourite porn star Amoreena Jones (Sarah Nicklin) in the club and instantly ditches Rita. Unfortunately, this wasn’t such a good move as Rita is actually a black magic priestess and she bears a serious grudge. With her voodoo dolls and ability to possess the living with souls of the dead, Rita wreaks her revenge on Rex by setting the sexy ladies he often ‘enjoys’ against him.

In the opening paragraph I stated that I was starting to get a bit tired of these retrograded ‘homages’, but The Disco Exorcist reminded me how, when done right, these films can really hit my sweet spot. Yes, the digitally created grain and film damage is there, but matched with low tech practical construction such as cheap but bold lighting and basic cramped sets, the film looks every bit like the sleaze-fests it’s referencing. The audio fits the bill too, with some slightly ropey dubbing helping add to the mood without overdoing it and the soundtrack pumping out lots of authentic-sounding disco tunes and Goblin-style synth horror cues (courtesy of Daniel Hildreth). The music is a real standout and I scoured the internet for the soundtrack when the film finished (to no avail unfortunately). The closing track in particular is a lot of fun, taking Tubular Bells from The Exorcist and disco-ing it up! 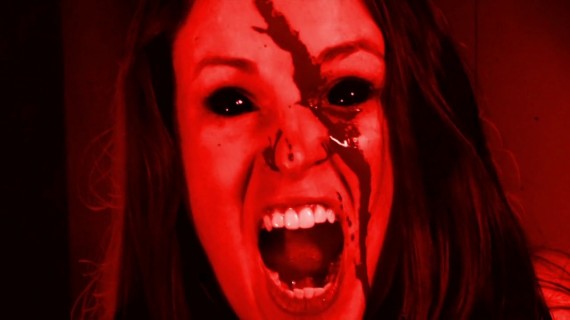 Most importantly, The Disco Exorcist gets the tone of true exploitation right. Too many modern grindhouse wannabes spend most of their running time winking at the camera, but this tends to stick to its guns, delivering the exploitation goods whilst the inherent ridiculousness of the situation and overindulgence of sleaze provides the humour. There are still plenty of ropey gags in there, but the film doesn’t pretend to be ‘above’ its roots by poking fun of or making ‘clever’ references to them. Instead it actually feels like it could walk amongst them.

One thing a lot of the B-movies from the 70’s had in common, which many often forget, was a lot of filler. Although their trailers were crammed with blood, gore and violence, the films themselves were often rather slow and padded out to feature length by shoddily written and performed scenes of ‘drama’ or unnecessary moody montages. This was because the budgets didn’t stretch far enough to pack the films with what the audience really wanted. Now The Disco Exorcist seems to either realise this or share the budgetary constraints, as it’s not as gore-filled as the trailer and opening sequence promises. Griffin and writer Tony Nunes make the decision to keep things rattling along through a solid 82 minutes though by upping the sex quotient to a ridiculous degree. It’s practically a porn film as barely 5 minutes go by without Rex putting his surname to good practise. These are never taken seriously luckily and add to the sordid tone, but I’d have preferred a bit more horror in place of a couple of those sex scenes.

As well as being a bit disappointed by the over-emphasis on sexploitation, I wouldn’t say I found the film as out and out hilarious its makers probably believe it is either. Many of the actual gags fall flat, but nevertheless I found myself strangely charmed by everything. Charmed probably isn’t the right word to describe my feelings towards a film with more bare breasts than an issue of Playboy, but, as nasty as the film was, I was grinning through every minute. In my opinion it nails the tone of true grindhouse movies, nodding to the camera a little too, but never rubbing your face in it. It never tries too hard to fake what made those retro classics good, instead deciding to just do it like they did back then, not sugar-coating the grimy pleasures, just trying to deliver as much filth as the budget will allow.

The Disco Exorcist is out on 14th October in the UK on DVD, released by Monster Pictures. The transfer is great, retaining the degraded film effect nicely. The great soundtrack booms through nicely on the audio too. Extra features include a single deleted scene which is pretty silly, red and green band trailers, trailers for other Monster Pictures releases and most notably a commentary from the stars and director. This is fun, but not one of the better chat tracks I’ve heard. It’s not particularly eye-opening and the director is kind of annoying, ogling at breasts far too often. It’s worth a listen though and is a welcome addition to the DVD package.