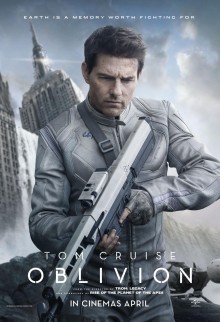 Great monologue intro. Not usually a fan but in this case it works well and for all the ‘fans’ of Mr Cruise don’t worry he gets his shirt off within the first 2 minutes and he’s exercising with 5 minutes. A staple of any Cruise movie. As you’d expect from a Cruise movie the scope, scale and effects are great, stunning in fact. So do a star and special effects guarantee a great movie? Well the short answer is no.

The general premise; set in the year 2070, we learn that some years ago an alien race called Scavs came down and waged a war on the human race after blowing up the moon. Cruise plays the part of Jack Harper one of a two person team, the other being Victoria, Jack’s coordinator and only link to the mother ship called Tet. Jack is assigned to repair and protect drone ships left on Earth before the rest of the human race, who reside in the mother ship just off earth, are sent to Titan one of Saturn’s moons.

Everything is laid out for us far too easily. From the outset, in the opening monologue we are told about a mind wipe 5 years ago to protect the mission. Warning bells start ringing as my mind leads towards a logical conclusion. Was I right? I’ll let you know in a while. During this opening monologue we also see that Jack is haunted by dreams that he believes to be more memories than dreams. He’s haunted by vision of a time long ago in New York. He’s with a woman and they are happy. The time is before the war and could never have been. So the question we are left with is. Do we have memories or do they have us? Are we just a bi-product of memories and past experiences and do our memories and experiences give us our humanity? It’s hard to go any deeper into this without giving the only surprise away. I won’t do that to you. I suppose this is one of the best qualities about this movie. It poses some great questions about ourselves, if we choose to bother.

The movie at times fails on its musical score to drive the emotion forward. It’s reminiscent of ‘Inception‘, though nowhere near as tuned in to the story or visual story. The choice of music at the cabin I quite liked with its regression into a rather hedonistic 1967 and its summer of love. I wonder what the connection and subtext is trying to suggest! 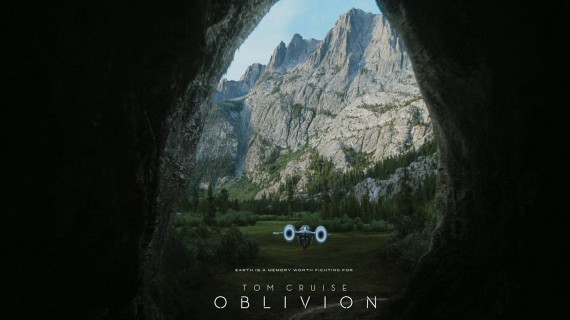 The script was ok. It has some depth and breath to it. Citing some classic texts, either directly or by prop and this I felt supported the movie well. Script wise we are offered, “…We won the war, now we have to leave…” said Cruise. The line very powerful and descriptive about all wars. Everyone involved has to deal with a sense of loss to a greater/lesser extent. There is also a prop of the book ‘The Tale of Two Cities‘ by Charles Dickens in the log cabin which is set in a lush green valley with flowers, trees and a fish! Again the prop offering an insight into the morality of the situation for our hero.

Good science fiction needs to be philosophical, make us question fundamental questions about love, life, humanity and God. However everything is rather simplistic and far too easy to follow. No great surprises throughout the entire film. Well, ok one nice surprise. One I didn’t see coming and I enjoyed. It was a convention that worked really well within the text but even with this it tells you more about how the film will end and yes I was right. I really hate being right about movies. I want surprise, tension, development and crisis. I want them all and not just a few. Gender also plays a part in this movie as well. The lines very prominently drawn about how man is to dream, where as women are to build. Remember to build at times one has to destroy. I’m sure there’s an essay in there somewhere!

With this film we are offered a view of a world that is almost frightened of modernity. It is science that has cost us heavily. The moon destroyed and the earth raped of most resources and it is the face of man keeping the threat alive.

How would I rate this movie. I did enjoy it. It was a pleasant watch with some outstanding landscape shots and special effects. The landscapes are almost a secondary character within the movie and Claudio Miranda as cinematographer has really done her homework once again. Very, very well indeed. As I’ve said no great surprises but the journey asks fundamental questions about love, life and humanity and is worthy of ones time and money. This is going to make money for everyone involved but won’t win any awards.