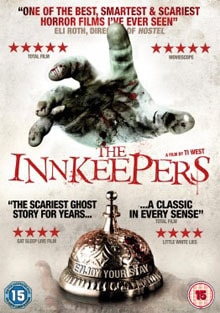 Although not his directorial debut, House of the Devil introduced most people, including me, to the talents of indie-horror fan favourite Ti West. I caught the film back in 2009 at Celluloid Screams (check out my reposted review) and although I didn’t give it the highest of scores due to a disappointing finale (in retrospect I’d have probably knocked the score up to 4/5), it certainly grabbed my attention and I kept my eyes open for future news of the writer/director (and editor). When I heard about a follow up in the form of The Innkeepers and it started picking up some great word of mouth over the pond I couldn’t wait to see it for myself. Well it’s taken a while, but it’s finally reached my doorstep and I’m pleased to say I loved every minute of it.

The Innkeepers follows the last remaining employees, Claire (Sara Paxton) and Luke (Pat Healy), of The Yankee Pedlar Inn in its last week of operation. With little to do behind the desk, the pair spend portions of their epic shifts trying to record the mildly spooky goings-on they’ve witnessed over the years. In its final week, the inn begins to throw up some ghostly surprises far beyond the door closing or ‘eerie sensations’ they’ve experienced before though, aided in part by a couple of strange final visitors including ex-actress turned medium Leanne Rease-Jones (Kelly McGillis). 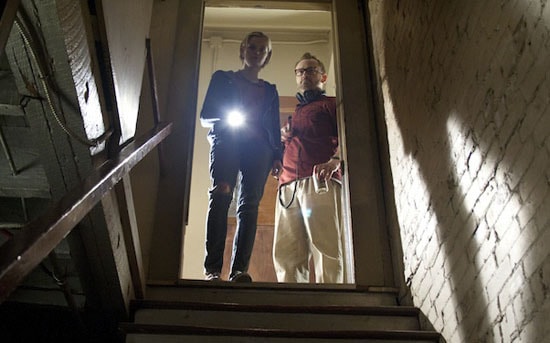 House of the Devil succeeded best in its incredibly well sustained slow-building tension and old-school vibe. The Innkeepers is similar in many ways, using mainly a single location (albeit quite a large one) and minimal cast to create a classically simple horror film that relies on tension over gore or effects. What West’s latest does differently is avoid the potential gimmick of mimicking the 70’s/80’s look and throws in a lot more humour. Whilst I wouldn’t necessarily call The Innkeepers an out and out comedy, it does draw much of its enjoyment from watching Claire and Luke simply dicking around, whiling away the hours before the inn shuts its doors. This slacker schtick has been done before of course and thus has the potential to be grating. When we’re introduced to Luke and his irritatingly stupid haircut I certainly got worried, but the two leads pull off their likeable loser roles admirably. I found Paxton insanely cute and loveable in particular (just don’t tell my wife). The banter between the two just feels natural and although it rarely made me laugh out loud (the ‘taking the trash out’ scene and one or two other gags did), it frequently plastered a big smile across my face.

This is still primarily a horror film though and thankfully it delivers in this department equally as effectively. With this and House of the Devil, West is clearly the current master of suspense-based horror. Although it’s lighter in tone than his previous film, The Innkeepers remains a truly nail biting experience. Eschewing the over the top shock tactics of many modern horrors, The Innkeepers keeps things simple and classic. Yes, it employs many well worn jump scare techniques along the way, but these are handled perfectly and occasionally subtly subverted or played with. This isn’t in the Scream realm of in-your-face postmodernism, but West lets the audience know that he’s aware of the familiarity of his techniques. This is clear in the references he makes to the popular and annoyingly effective ‘zombie pop-up’ viral videos. 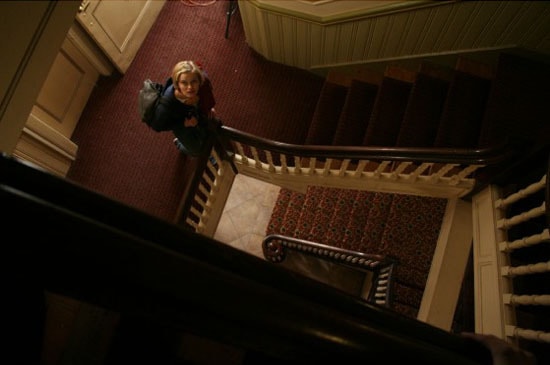 It’s not a perfect film though. There are a few ‘shout at the screen’ moments when characters do ridiculous things and there are a couple of suspect bits of sign-posting, but both of these elements work as part of West’s adherence to old fashioned formulas and add to the fun. The coda to the film also feels marginally unsatisfying, but I liked the fact that some elements to the story are left unanswered and the film still ends much more satisfactorily than House of the Devil does for me.

These are minor quibbles though, as on the whole I loved The Innkeepers. It shot right into the upper echelon of films I’ve seen this year and I wouldn’t be surprised if it appears in my top ten come the new year. Utilising some excellent but un-showy cinematography, effective sound design and a perfect sense of timing, it’s further proof that Ti West is a horror director to look out for. At only 32, he’s shown at least twice (I haven’t seen his earlier films yet) that he can produce pitch perfect horror, a feat that few directors can hope to achieve in a lifetime. I’d like to see him branch out a little further in future projects beyond the ‘girl getting scared in an empty big house’ sub-sub-genre, but I won’t be complaining too much if he decides to stick to the formula again.

You may find The Innkeepers in selected cinemas around the country, but if not it is out on June 25th on DVD and Blu-Ray, released by Metrodome. I got sent the DVD version. As expected for a new release, the picture and sound quality are great.

We’re treated to two commentaries – one with West and the two main cast members and another with West and his producers and sound designer Graham Reznick. I haven’t had time to listen to these, but I’m keen on doing so soon – I’m a sucker for commentaries on lower budget indie releases. They generally feel more natural than those on mega-budget films with enormous casts and crews.

Added to this is a short behind the scenes documentary which isn’t particularly informative or memorable, but it’s more fun than most.

On an unnecessary side note, the artwork for the UK edition isn’t anywhere near as good as it was in the US. Why Metrodome didn’t adopt one of the two fantastic posters produced for viewers across the pond I’ll never know. One of those designs is used on the menu, but not on the DVD cover, which makes it even more perplexing.