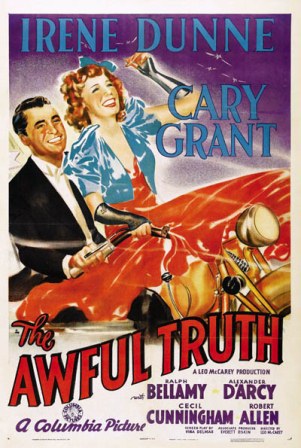 The Screwball Comedy was a hugely popular movie genre of the 30s and 40s, based around the premise of warring couples who spend much of the film’s runtime apparently despising each other only to inevitably reconcile in time for the final fadeout. Since much of the humour of Screwball was derived from the then incongruous notion of a strong woman holding her own in a male dominated world, the genre has inevitably died out or at least morphed into something dreadful, i.e. the production line battle-of-the-sexes romantic comedies Hollywood churns out in droves, relying on the basest of stock gender stereotypes. This is not to say that the original Screwball films were hugely progressive in terms of sexual politics. Despite bringing a barrage of strong women to the screen, the humour would often veer towards the sexist and it was mandatory that the woman be in the arms of the man by the movie’s end, restoring order to the world because now they were together the forceful manipulations could stop and traditional wedded bliss could commence.

What the original Screwball comedies did have in spades, which today’s mainstream romantic comedies generally lack, was wit and charm. The former, in particular, allowed the same scenario to be wheeled out again and again but with different rapid-fire dialogue keeping it fresh and funny. Laughter was always prioritised over the in-your-face sexiness or mawkish messages that would later come to dominate. There are several examples of Screwball Comedy that are often sited as the greatest of the genre: It Happened One Night, His Girl Friday, The Philadelphia Story or Bringing Up Baby. However, for me the greatest and all-out funniest of the lot is undoubtedly Leo McCarey’s The Awful Truth, a comparatively lesser known film that is nevertheless extremely well-loved by its devoted following. 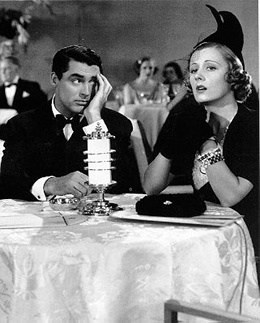 The production code, which imposed a restrictive set of moral values on Hollywood movies of this era, actually made these films more fun because the infidelities and indecencies that were so integral to their plots had to be subtly (or sometimes not so subtly) implied with tasteful little verbal winks to camera. This reinterpreted what could have seemed like some pretty nasty premises as disarmingly sweet parlour games. My favourite example of this is the set-up of The Awful Truth, in which an obviously philandering Cary Grant returns home from a phony trip to Florida (complete with fake sunbed tan and a basket of oranges) to find his wife, Irene Dunne, arriving home with her dashing piano teacher. Neither infidelity is made explicit but it’s clear what is being alluded to as Grant and Dunne trade innuendos and witticisms. This results in a mutual agreement to get a divorce, which sets the plot in motion as they have 90 days to rediscover their love for each other before the divorce becomes final.

Despite their respective cheating, Grant and Dunne immediately establish themselves as utterly charming characters and the fact that they are clearly as bad as each other allows us to not only enjoy the humiliation and suffering that both are about to endure but also ensures that we root for them to get back together by the end of the film. Cleverly structured, The Awful Truth spends the first part of the film charting Grant’s gleeful sabotage of Dunne’s rebound engagement to Oklahoma born mummy’s boy Ralph Bellamy, after which we get to relish Dunne turning the tables on Grant to throw a spanner in the works of his new engagement. Now, at this point I acknowledge that my inadequate plot summary has probably made The Awful Truth sound like a horrendously cliched piece of trash by the standards of any era. But the devil’s in the details and The Awful Truth‘s many, many set pieces must be seen to be believed. 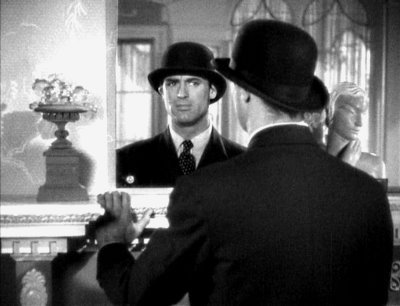 Often old comedies of the 30s are funny in a sort of quaint way in which you find yourself more charmed than amused. Not so with The Awful Truth, which is genuinely very, very funny. It’d spoil the fun to mention too much here but in particular I’d recommend looking out for a scene involving a dog that likes to play hide-and-seek and also the aforementioned opening sequence in which Cary Grant’s delivery of every line is exquisite. Grant is superb throughout the film, pitching his performance just left of centre so that the perfect dialogue sounds completely unexpected. However, it is Irene Dunne as Grant’s wife Lucy who gives the best performance and one of my favourite performances by an actress ever. Whether she’s squirming her way through an ill-advised romance or triumphantly wreaking havoc in her husband’s relationship, Dunne is utterly captivating, hilarious and sexy. There’s a scene towards the end of the film in which Dunne arrives unexpectedly at a party being thrown by Grant’s potential in-laws which stands as one of the greatest and funniest scenes in film history and sets the seal on this gorgeous performance. 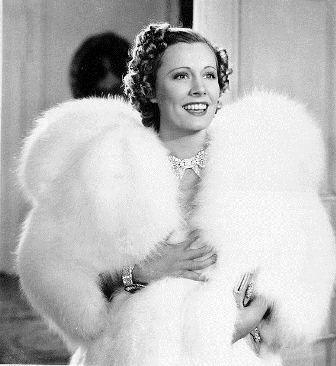 Inevitably, The Awful Truth has lost a little of its bite in a society where divorce and infidelity are commonplace topics in films of all genres. The once quite racy final sequence (complete with its surreal, symbolic closing image) will seem utterly tame to anyone with no knowledge of the film’s social context but by this stage it’ll matter little. The important thing is that in losing its bite the film has lost none of its funny and its infinite rewatchability coupled with a short running time and those mesmerizing lead performances make The Awful Truth a movie to return to again and again and always leave with a smile on your face.