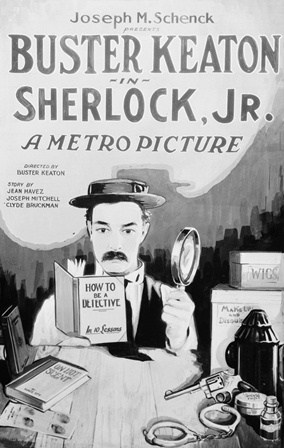 What’s the coolest movie performance of all time? I’m not talking about the greatest performance of all time. Forget the quality of acting for now and focus on the realisation of the character as an in control individual who you really wish you could be like. The most common answer is one of the James Bonds because apparantly our yardstick for cool is a misogynist in a tuxedo! My nomination, however, would go to Buster Keaton in the classic 1924 silent comedy Sherlock Jr. And here’s why:

Like most people, I originally approached silent cinema not knowing what to expect. In an age when it’s difficult to get some people to watch even black and white films, what chance have you got of convincing them that the removal of sound will do nothing to diminish their viewing pleasure? However, I immediately took to the medium of wordless storytelling. It’s a unique art form in which the director and actors have to work much harder to get the story across, assisted only by occasion intertitles. Predictably, this results in a completely different, often more melodramatic form of acting. Most silent film actors resorted to big gestures and wild expressions so the audience were left in no doubt as to what they were supposed to be feeling. One man in particular, however, went in entirely the opposite direction, remaining stony faced and unsmiling throughout his many famous screen appearances and communicating all his feelings through the subtlest of evocative little flickers. That man was Buster Keaton.

Buster Keaton is cool. He oozes it. The fixed, neutral expression, the astonishing control he has over his own body, the heroic execution of those jaw-dropping stunts. I’d say he was up there with the coolest screen presences of all time. So why have I picked this particular performance as his coolest of all? Well, despite their winning physical dexterity and the fact that they always win through in the end, Keaton’s characters are usually portrayed as part-hero, part-sap. From the effete son of a manly riverboat captain in Steamboat Bill Jr. or the shamed army reject in The General, his displays of acrobatic heroism are usually intended to prove himself to someone he has somehow disappointed, or else as a means of escape from a disasterous situation he has clumsily wandered into (a pack of angry brides in Seven Chances or an entire police force in Cops). Sherlock Jr. takes a different approach by seperating the sap Keaton and the cool Keaton into two different entities. In the film’s framing device, Keaton is the sap; a movie projectionist who is framed for a crime and whose attempts at amateur sleuthing to catch the real culprit are abandoned as a disaster almost immediately. However, as he dejectedly returns to his day job, Keaton falls asleep and dreams himself to be a heroic figure; the great detective Sherlock Jr. It is as this character that Keaton turns in what may be the coolest performance of all time. 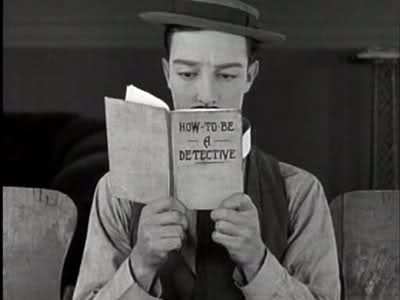 That is not to say Keaton’s turn as the projectionist isn’t great too. For the first fifteen minutes or so, we are treated to some more traditional, if extremely well written clowning. A set piece like Keaton’s discovery of a dollar in the rubbish he has to sweep up is a small scale but wonderfully clever little bit that requires Keaton to communicate numerous emotions in a short space of time. The moment in which Keaton shadows his suspect, walking ludicrously close behind him and mirroring his every step, is an example of the man’s genius. At one point, the suspect tosses a cigarette behind him, which Keaton catches, takes a drag on and then discards. It’s a moment of sheer cool which foreshadows the subsconcious creation of Keaton’s detective alter ego later in the film and shows that he is very much a part of the sap projectionist. Even when the writing seems lazy, such as the ancient slipping-on-a-banana-skin gag, Keaton pulls off the physical performance so phenomenally that it still gets a laugh. Keaton was extraordinarily dedicated to his craft, so much so that he unknowingly fractured his neck while performing the stunt involving a water tower which closes the introductory section of Sherlock Jr. The healed break was not discovered until years later.

But it is once Keaton falls asleep that Sherlock Jr. really gets on its way to establishing itself as one of the greatest achievements in all of cinema. From hereon in, the film is full of tricks and stunts, some of them down to technical wizardry, others more closely linked to traditional stage conjuring, but all of them sheer cinemagic! Keaton steps out of his own sleeping body and walks up the cinema aisle and right into the screen, where he joins the action of the movie. What follows is one of my favourite scenes of all time; Keaton remains on screen as the background changes behind him several times, causing surfaces to disappear from under him or objects to suddenly appear in his path. The transition from background to background is astonishingly smooth and Keaton revealed years later that he and his cameraman used surveyor’s equiptment to position Keaton and the camera in exactly the right position. This excruciating process paid off in spades. 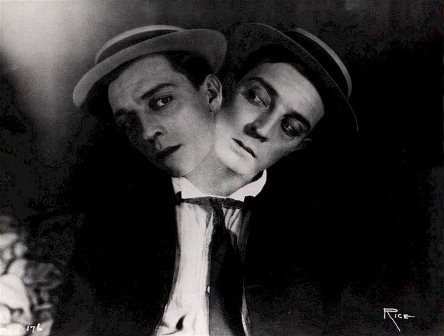 The film within a film settles down as Keaton finds himself playing the role of the world’s greatest detective. Resplendent in suit and top hat, Keaton has become Sherlock Jr., suddenly in possession of a completely assured manner. Now it is his enemies who are the dupes, though Keaton pays them little attention and foils them without really trying. He wanders through a series of booby traps, foiling each in turn. Most brilliant of all is his clearance of a pool table upon which one of the balls has been replaced with an explosive replica. Keaton performs a series of amazing trick shots, gradually pocketing every ball while never coming into contact with the explosive device once. Instantly, he is the coolest person I’ve ever seen but there’s plenty more to come!

We cut to the next day and Keaton heading out to apprehend some villains. When his sidekick drives off without him, Keaton uses a level-crossing barrier to lower himself into the moving vehicle, where he lands, feet elevated, in a relaxed position. Again, can you imagine anything cooler?! I’ll not go on to list every moment that follows but a few cannot go without mention. A magic trick in which Keaton seemingly escapes his pursuers by diving into a small suitcase held by his sidekick is still visually incredible to this day, while an extended sequence in which Keaton rides on the handlebars of a speeding motorcycle, unaware that it’s driver fell off long ago, shows that he can mix obliviousness with poise and dignity. Sure, he’s unaware of the mortal danger he’s in but he still effortlessly evades every threat to his life. Finally, the case wrapped up, Keaton finds himself and his girlfriend mistakenly thrown into a river while still in the top half of an unintentionally dismantled car. Without even thinking, he puts the hood up and converts it into a sail, creating an instant boat in which he and his love drift happily and enjoy the view. 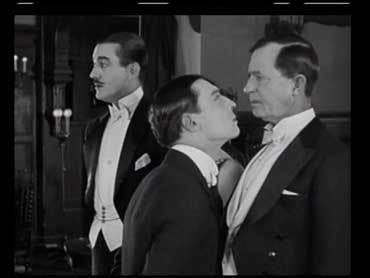 Sherlock Jr. runs for only 44 minutes, making it an ideal starting point for those curious about silent cinema or Buster Keaton in particular. Keaton uses every second of his barely feature-length running time to entertain, astound and delight. Apparantly he cut and recut Sherlock Jr. in an attempt to make it as good as possible and the result is a film with no flab whatsoever. It zips along with thrills and laughs never letting up. The General might always be regarded as Keaton’s greatest achievement (and it is superb) but my favourite will always be Sherlock Jr., for its utterly magical trickery, its perfect pacing and, of course, for the coolest big screen performance of all time.