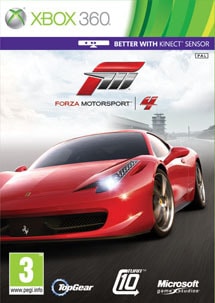 With the (frankly weird) PS3-exclusive Gran Turismo 5 finally released, Xbox 360’s Forza has finally got a current-gen opponent to slipstream and, hopefully, overtake.

Ah Forza. Much like Gran Turismo, not many people know what it actually means, and don’t expect to find out here, fact fans. It doesn’t matter though because with these console-exclusive franchises, you know what you’re getting: hundreds of faithfully reconstructed, very shiny cars, as well as tracks; complex tyre-to-road physics algorithms; a gallery mode; a paint shop and, of course, a career mode, not to mention online multiplayer gameplay and a pretentious opening FMV sequence.

Where Forza does differ from its Japanese cousin, however, is in its more orthodox approach to things. Where GT5’s menu and mission structures were, at times, as aimless and mystifying as Peter Andre’s career, Forza 4 keeps its feet firmly rooted in relative familiarity, with a few surprises. Some good, and some not so.

As far as brand new features go, for a start there’s Rivals mode. It’s a concept as old as the hills that’s been given a new lease of life thanks to Need for Speed’s recent invention of Autolog.

Essentially it’s the same ‘race-against-your-online-mate’s-ghost’ that’s been seen in so many games before, with the option to challenge all fellow Forza owners on your friends list, or just selected rivals. These chums will have ‘emails’ arrive as soon as they next fire up their copy of the game, and take on your challenge at the press of a button.

It’s such a simple concept: throwing the gauntlet down at the player’s feet at the early menu stage, rather than waiting for him or her to search for it themselves, and it not only adds hours to any decent driving game, but can serve as an all evening distraction from any furthering of your career, which you may have had planned. 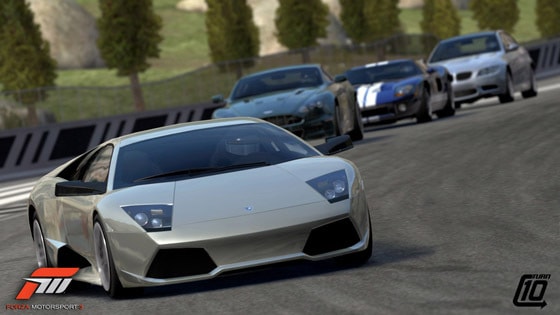 What Microsoft Studios game these days is released without some kind of Kinect functionality? Certainly not Forza 4. Whether by choice or having their arm forced up their back, Turn 10 has implemented as much Kinectability (We invented that word, right?) as you can shoehorn into a driving game.

First up is Autovista, which places one of 24 cars with an extremely high level of internal and external details in a studio, with you stood up in your living room, staring at it. Lean or step to either side and you’ll glide around the car, lean forward and so will your virtual self, peering in to take a closer look at those alloys.

Why not reach out your hand, open the door and take a seat? This is where Kinect will start tracking your head movements, pivoting the camera about based on how you position your noggin, allowing you to ‘feel’ as if you’re really in the car.

It doesn’t feel like you’re in the car, of course, it feels like you’re playing a snazzy Kinect tech demo, which is exactly what Autovista is, but it’s s fun distraction for a few minutes, if a little sterile.

The head tracking from Autovista is also optional in any race you care to take part in, this allows you to ‘look’ into upcoming corners, making the screen glide and tilt about, again adding authenticity to the first-person driving experience.

It does work quite impressively well but it’s not for everyone. How do I know? Because it gives me mild motion sickness, yet I have a number of online chums who can’t get enough of it and swear it’s a game-changer (for the good, of course).

As you would expect, there is a Kinect driving mode, although it’s with every driving assist slid up to the max, including some set aside for this mode alone. Controller-less technology is great, don’t get us wrong, but there is a time and a place, and it’s not really in a driving game, where literally all you do is steer (and even this goes to autopilot when the camera frequently loses track of your hands). 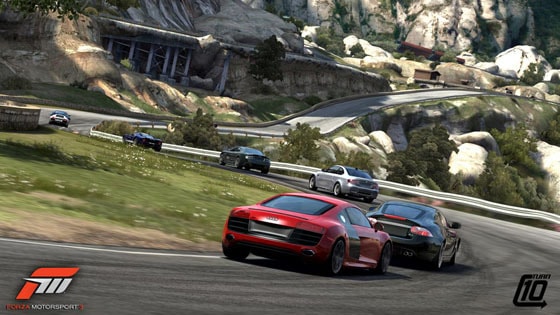 No, the best Kinect implementation in Forza 4 is in the menu system. Yeah, it sounds boring but the voice recognition system that drives menu selection is nigh on perfect.

Say ‘Xbox’ to bring up a panel of menu destinations then say or even mumble what you want next, and Forza will do it. We’ve tried reasonably hard to make it misunderstand us in our tests and it’s not been outfoxed yet. Very impressive and genuinely useful.

Not to be outdone, Forza 4 has copied GT5’s inclusion of the Top Gear test track and gone one better, by having multiple events on it, both in career and rivals mode, as well as Clarkson himself doing voiceover for many of the game’s explanations. And where JC isn’t to be found, silver-tongued charmer Peter Egan pops up to fill in. All very professional.

Four new tracks, dozens of new cars and twice the amount of cars on track as before (16 now where before there were eight) round off the list of new additions.

Negative points would have to be the overabundance of American muscle cars, to the detriment of many new European or Asian models; rare but obligatory ‘game’ challenges in career mode, such as car football or bowling; and Forza’s smooth performance has again been at the expense of weather effects or night driving, which will grate with some, given that this is the game’s fourth iteration.

It’s easy to see past these minor issues, to be honest, as there is just so much to enjoy about Forza 4. It plays like a dream (it seems every car is fun to drive in some way), looks and sounds ultra-professional and gives more diversity and options in the sub-genre than anything that’s gone before it. Microsoft’s dogged persistence has paid off and Gran Turismo has, for now at least, had its crown swiped, probably until the next GT comes out in 2034.