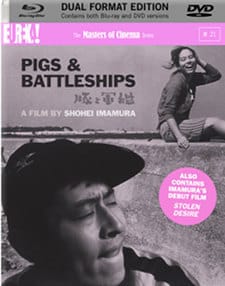 One of Shohei Imamura’s earlier films (his fifth to be exact), Pigs & Battleships has lost none of its potency or urgency despite being originally released way back in 1961. Imamura, one of the of pioneers of Japanese cinema (having the searing Vengeance is Mine and the quite wonderful Warm Water Under a Red Bridge to his name), creates an intoxicating world of Yakuza and wannabe gangsters vying for control of the local pork business in a US-Navy occupied coastal town during WW2. Throw in young hot-headed love, a whole host of loud and questionable characters and the director’s eye for some still impressive photography and Pigs & Battleships is worthy of discovery by anyone who considers themselves connoisseurs of serious cinema.

In amongst the sweaty and claustrophobic squalor of the coastal town, Yakuza run rampant, the whore houses are overflowing with US Navy officers and Imamura revels in the underbelly of war torn Japanese society as everyone attempts to scrimp a living by any means necessary. Amongst all this squalor is low level Yakuza wannabe Kinta (Nagato) and his fiery relationship with longtime love, Haruko (the marvellous Yoshimura). Their relationship provides the heart of the story: two young souls in love and lust but unable to escape to a better a life due to Kinta so desperately wanting to impress the Yakuza and join their ranks. Despite Haruko’s best efforts to get them out of their mundane existence, Kinta’s compulsive bullheadedness and willingness to take the fall for his Yakuza buddies keeps the two trapped in their perpetual low rent life. In turn, this sends Haruko on her own downward spiral and as things get progressively worse and the neighbourhood increasingly volatile the film builds and builds to a truly startling climax. 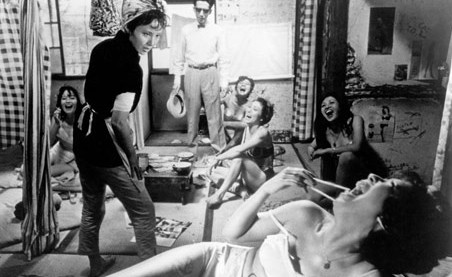 Not that the film is all doom and gloom as Imamura does find hope in amongst all the things going wrong and the main characters are certainly always optimistic if ever deluded. The two leads are incredible, and despite their incessant need to shout continuously during scenes of drama, are hugely likeable despite their flaws. Imamura makes us want them to do better for themselves, even if it is unlikely they ever will. While the film looks at the seedier side of a small Japanese town dealing with US occupation and rampant gangster activity, it’s the trying-to-be-normal couple in amongst all this that gives the film its soul and their relationship and hope for a better life that still makes Imamura’s film feel as urgent and emotionally raw as it must have some 50 years ago.

With some truly striking black and white photography including an impressive array of tracking shots (which are still as technically brilliant as anything in today’s films) Pigs & Battleships is entertaining, emotionally stirring and a damn fine slice of Japanese New Wave cinema.

Pigs & Battleships is out now on DVD and Blu-Ray from Eureka Entertainment. The picture and sound restoration are top notch and the DVD/Blu-Ray also comes with Imamura’s debut feature Stolen Desire and an impressive booklet featuring essays on both films and rare stills. 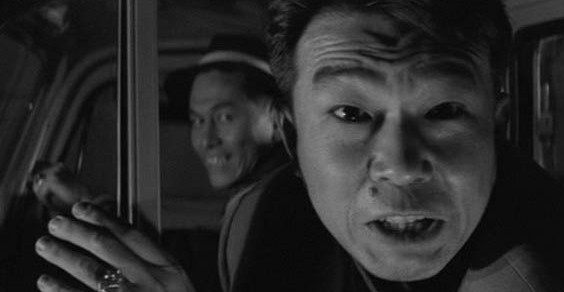