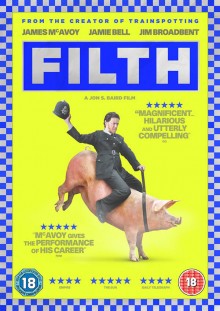 Trainspotting ripped onto the British film scene in 1996 at the centre of the ‘cool Britannia’ movement, showing the world that the British film industry could make something bold, exciting and stylish, not just period dramas and grim social realism. As well as making a better name for British cinema it also helped boost the popularity of the work of Irvine Welsh, whose novel the film was based on. Another attempt to bring his wild, unvarnished view of Scottish life to the screen came soon after with The Acid House, but this was a relative failure. Although Welsh’s books continued to sell, filmmakers seemed to steer clear of trying to pull off Danny Boyle’s balancing act of managing the madness alongside the central character arc and impact of the social side of the writing. There have been numerous rumours of a film adaptation of Porno, Welsh’s sequel to Trainspotting, but these have never become more than mere rumours.

Fast forward 17 years (God that makes me feel old) and Jon S. Baird has brought Welsh’s Filth to the screen. James McAvoy takes the lead as Bruce Robertson, a racist, homophobic, drug taking detective sergeant in Edinburgh. He’s desperate to win back his wife and daughter (the reason for their disappearance is held back through most of the film) and the only way he feels he can do this is by beating his colleagues to a forthcoming promotion. Desperate, he will do anything to get it and treats the whole operation as a cruel game in which he will crush even his last few friends to win.

Right from the offset it’s obvious we’re in the mind of Welsh with Scotland’s seamy underbelly being ripped open by the staggeringly offensive Bruce. Unfortunately Baird doesn’t have the same handle on it as Boyle did. The first half in particular is of wildly varying quality. There are a number of cutaways to short fantasy sequences, either for gags or to bring us into Bruce’s warped mind and these often fall flat. The tone and presentation of these scenes take outrageousness too far into campy territory and because of this the film seems more silly than sharply pointed.

The film occasionally shifts from this very black comedy to straight up drama and this can be quite jarring, in the first half at least. As the film moves on, the drama becomes more prominent and as a whole the film becomes more effective. It’s in this second half when you realise Bruce isn’t totally in control of himself and he’s actually a severely disturbed individual, not just an evil bastard. The final act has a few flaws though. Things are tied up a little too neatly even if it’s generally effective. Also, the revelation of the significance of the boy Bruce keeps seeing is fumbled badly, explained in one of the ropey nightmare sequences featuring Jim Broadbent. I usually have a lot of time for the Lincolnshire born actor, but his ridiculous role here is quite embarrassing.

The performances in general are of mixed quality although McAvoy is very impressive in the lead role, relishing in the nastiness whilst delivering the dramatic goods when his character eventually breaks down. The film revolves around him and would fall apart if not for his vicious charisma and frightening portrayal of a man unhinged. The underrated Eddie Marsan is great too as Bruce’s hard-done-by accountant friend, Bladesey.

So on a whole the film gets by with its strong central performance and a smattering of darkly entertaining and powerful sequences, but unfortunately it’s not consistent enough to be truly recommended. It’s certainly no Trainspotting.

Filth is out on 10th February in the UK on DVD, released by Lionsgate. I watched the Blu-Ray and it looked and sounded great. There’s a whole host of special features too. Irvine Welsh and writer/director Jon S. Baird provide a commentary which I haven’t had chance to listen to yet, but I imagine it’s an interesting listen. They are also interviewed, as is McAvoy. Again, I didn’t get around to all of these, but I watched McAvoy’s interview which was ok, but the questions were very bland (“what was it like working with…”).

Included is also a large number of deleted and extended scenes and outtakes. These are a mixed bag although some of the deleted/extended scenes are pretty funny. They didn’t advance the film so I can see why they were dropped, but they’re worth a watch here. A deleted cameo from Welsh is pretty cringeworthy though – I’m glad they cut that.