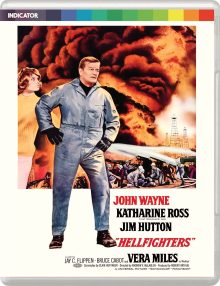 Opening with an impressive burn stunt Hellfighters starts as it means to go on with lots of in-camera, dangerous-looking stunts and action interweaved into a tale that lets us share time with a tight team of oil-fire fighters who risk life and limb keeping some really nasty oil fires under control; usually culminating with them putting them out completely.

Head of the ‘Hellfighters’ is Chaz Buchman (John Wayne) who is badly injured near the beginning of the film, which brings in his estranged daughter, Tish, (Katherine Ross), to visit him in hospital and to figure as the soon-to-be love interest to Buchman’s second, Greg Parker (Jim Hutton), but also she’s very much our eyes into the macho, dangerous and strange world of high-level fire-fighting.

We get to see the small team take on a number of oily conflagrations, each one getting more and more risky, sometimes with multiple fires at each location. And the final five-headed fiery ‘beast’ they take on looks like it could be too much, even for them…

Hellfighters is very much a product of its time, and feels very much like a studio ‘disaster’ type movie that was very popular during the late sixties and seventies. Director McLaglen was known to be a solid pair of hands and here he excels in delivering non-flashy action, peppered amongst familial drama and romance. While, by today’s standards McLaglen’s direction seems rather workman-like at times, he’s still done a good job of capturing the highs and lows of oil fire-fighting.

The characters are all three dimensional (including the women, (which was nice to see) and the photography makes everyone look great, even when they’re covered in oil and sweat. The music score by Loenard Roseman (and supervised by Joseph Gershenson) is suitably bombastic and rousing, and the cast all put in good performances, especially Wayne and Katherine Rees, as his daughter. However, the real highlight of the show in Hellfighters is the actual fire-fighting sequences, which are all done for real, in camera – no CGI here. There are some excellent models used though.

Hellfighters is obviously based very much on the extraordinary work of American oil well fire-fighter  Paul Neal ‘Red’ Adair, who was well known internationally. In fact, he’s down in the film’s credits as ‘technical advisor; obviously bringing in his experiences through the Wild Well Control Company. And it’s this level of detail that really helps to ‘sell’ the action sequences in the film. The excellent cinephotography and beefy sound-mix also help ‘sell’ the sizzling action scenes too.

If I did have one negative about the film it’s that Buckman’s complicated relationship with his ex-wife seems a bit over-manipulated in order to fit in with the film’s main story-arc. But Vera Miles is convincing as Buchman’s ‘Kryptonite’, and their scenes together are well played and maintain one’s interest.

Overall Hellfighters is a good, solid piece of action drama, of the type seldom seen these days, more’s the pity. 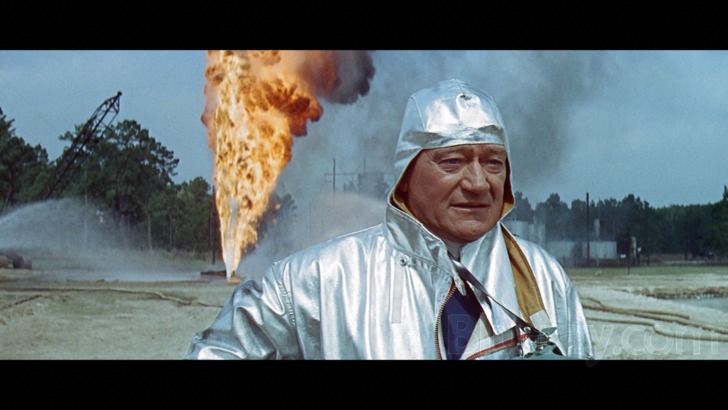 Powerhouse is distributing Hellfighters on Blu-ray. The extras that come with this release include:

An audio commentary provided by screenwriter C. Courtney Joyner and journalist Henry Parke. The two writers make for a complimentary double-act and they reveal some interesting facts about the production, including the fact that Wayne was happy to play a fatherly role here, and not be the romantic lead. It was also the first film where John Wayne’s salary was a million dollars.

The BFI interview with Andrew V. McLaglan – Here we learn plenty of interesting details about the life and career of the director including the fact that his dad, a famous actor, advised him to steer clear of the film industry, but Andrew wanted to be a director from the age of 12 so wouldn’t be dissuaded.

Andrew V. McLaglan: The director and the duke (3.5 mins) – The director’s daughter, Mary, expands on the working relationship her dad had with John Wayne, who was 13 years older than he was.

Audio interview with Edward Faulkner (with Courtney Joyner) (21 mins)  – An interesting interview that reveals Wayne as a clever, hard-working guy, who never had a script in his hands, and who was always the first to arrive at and the last to leave a set.

The Rare Breed: Tom Vincent on Andrew V. McLaglen (28 mins) – Vincent talks about the film’s place in the director’s filmography and how the director towered over most of his crew, being 6 foot, seven inches tall!

Theatrical trailer (2.5 mins) – We hear John Wayne himself declaring it to be “the hottest film ever made”!

News report from the Ekofisk Oil field in 1977 (1.5 mins) – Red Adair and his second, ‘Boots’ Hanson are interviewed. 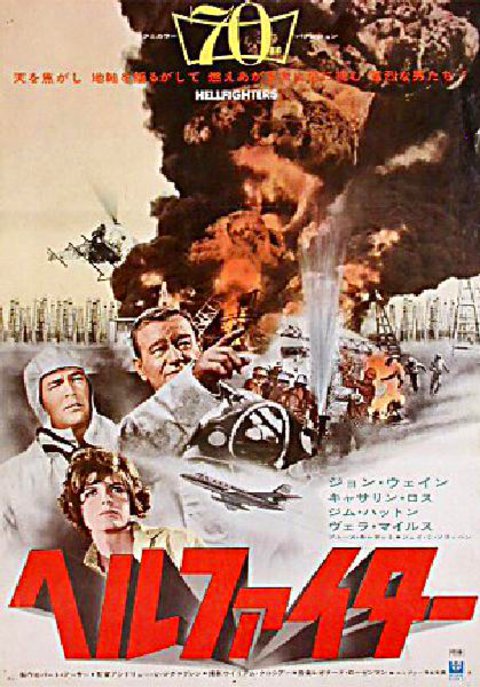